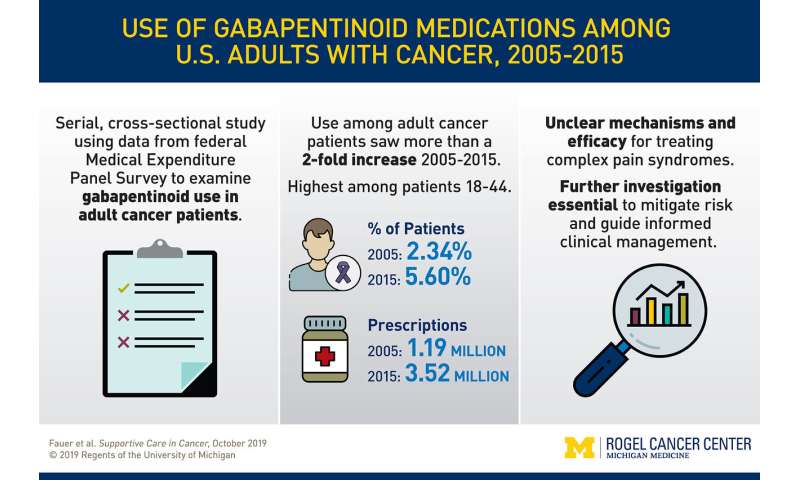 Between 2005 and 2015, as the opioid crisis in America came into focus, prescriptions for gabapentinoid medications—gabapentin and pregabalin—to adults with cancer saw a two-fold increase, a University of Michigan Rogel Cancer Center study has found.

Gabapentin, which affects voltage-gated calcium channels in the brain, was originally approved as an anti-seizure medication and later for treating nerve pain. Today, up to 95% of its use may be “off-label,” researchers have found—highlighting a lack of rigorous study of its mechanisms and efficacy for treating pain more broadly, as well as other conditions it’s commonly prescribed for, like migraines and fibromyalgia.

The U-M study, which examined federal Medical Expenditure Panel Survey data, presents the first evidence and measurement of a steep upward trend in gabapentinoid prescriptions among adults with cancer, says lead author Alex Fauer, R.N., a doctoral student at the U-M School of Nursing. The findings, which dovetail with broader, national trends, appear in Supportive Care in Cancer.

“Cancer is a disease of aging, so we were surprised to find that adults 18-44 were the largest age group getting these prescriptions,” Fauer says. “This may indicate doctors are increasingly prescribing gabapentinoids as an alternative to opioids for treating cancer pain in younger adult patients. It may additionally point to a growing incidence of nerve pain caused by chemotherapy in cancer survivors.”

The study found the number of adults with cancer who were prescribed gabapentinoids grew from 3.3% in 2005 to 8.3% in 2015, with the total number of prescriptions growing from 1.2 million to 3.5 million over that decade.

More recent data wasn’t available, but likely shows a continuation of the trend, Fauer says. The data also doesn’t include inpatient treatment, excluding many of the sickest patients.

Use of gabapentinoids to treat the complex pain syndromes of cancer patients is problematic for a couple of reasons, says senior study author Christopher Friese, Ph.D., R.N., the Elizabeth Tone Hosmer Professor of Nursing and a professor of health management and policy at the U-M School of Public Health.

“The medications’ mechanisms of action and efficacy for pain control and other off-label conditions need further study,” he says. “Additionally, evidence indicates the healthcare profession may have been underestimating the risks associated with gabapentinoids—including the potential for abuse and physical dependence, and dangers when taken in combination with opioids and other medications.”

More investigation of the effectiveness of gabapentinoids for cancer pain is needed to inform clinical practice, Fauer adds, along with deeper understanding of potential risks.