Not only do the women of the family add their handed-down dolls to the golu display, the children also give their toys to be kept in the Golu padi—though it turns out to be a tough test for them as they are not allowed to play with or touch them during the festival. 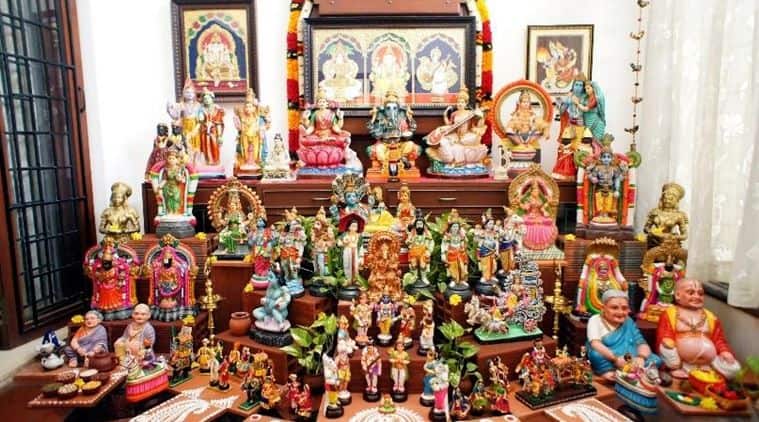 Tanjore Golu dolls play an integral part in various rituals and customs of the southern India and in 2009, they were included in the much-coveted GI Registry of the government of India because of their cultural importance. On World Doll Day, Sahapedia takes a look at the Golu festival of Tamil Nadu where dolls occupy the centre stage.

By Sindhuri Aparna and Prathyusha Ravi

Dolls are perhaps one of the oldest toys that have been around for centuries. Terracotta figurines excavated at sites like Harappa suggest that dolls existed both as toys as well as for ritualistic purposes in ancient civilisations. While there is no denying the joy that dolls provide—children and adults alike—as objects of play, in many cultures, they continue to be used for rituals. Those familiar with pop culture would be acquainted with the Haitian voodoo dolls, as well as Japan’s famous Hinamatsuri festival, where intricately crafted dolls are displayed as a celebration of femininity.

On World Doll Day, we train our gaze closer home, towards the Golu (or Koluvu) festival of Tamil Nadu, where the every-day dolls are deified and occupy centrestage. Versions of this festival are also observed in Karnataka, Andhra Pradesh and Telangana.

Golu or Koluvu is the festive display of dolls in south Indian homes during the nine-day festival of Navratri, which culminates with Dussehra. These dolls emerged under the patronage of the Nayaka and Maratha rule—around the 17th century—in Tanjore (now Thanjavur), which was once the capital of the Chola empire. There are two types—the Raja Rani bommai and the “urutu bommai”. While the Raja Rani bommai dolls depict the Maratha King Serfoji II and his consort, the “urutu bommai” is a pair of rocking dolls with hemispherical bases, which were included in the much-coveted Geographical Indications (GI Registry) of the Indian government (a statutory recognition of the toy’s geographical origin to this region) in 2009.

These dolls, made from natural materials such as wood, clay, terracotta and cloth, are painted with bright natural dyes and colours. They are known as golu in Tamil, bommala koluvu in Telugu and bombe habba in Kannada. In 2015, Tanjore dolls were also introduced as postal stamps and, today, restoration of golu dolls has turned into a major commercial activity. Various steps have been taken by the government to ensure the perservation of these traditional dolls. Arranged in a Pyramid

Most Golu dolls depict mythological stories and epics, representing gods, goddesses, animals, birds. They symbolise the worship of the divine in all animate and inanimate objects. Modern-day innovations include political leaders, as they also attain cult status in southern India. Interestingly, in the display of dolls, there exists a hierarchical structure.

The dolls are arranged on odd number of steps (three, seven, nine…) in a pyramid-like structure. While the goddesses Durga, Lakshmi and Saraswati occupy a vital position in all Golu displays, other dolls are mostly arranged in pairs with regard to the anatomy, posture, colour, height and weight of the figures. In a typical arrangement, while smaller dolls occupy the lower padi (tier), medium-sized dolls are placed in the middle and larger dolls occupy the upper padi, since the display is viewed while sitting down.

After the arrangement is complete, a ceremonial finial called kalasam (copper pot) is placed in the centre of the upper tier. Usually a family heirloom, it is filled with either rice or water and decorated with mango leaves and a coconut. It is believed that with the chanting of shlokas, music and dance, the copper pot offers positivity to the Golu display.

Watch the making of the Tanjore dolls here:

These dolls—or any other figurines on display—are honoured and worshipped during the nine days of celebrations. During the festival, children, young girls and women perform various rituals such as chanting shlokas, drawing kolam or muggu (floor art) in front of the padi and offer food to the gods and goddesses.

Not only do the women of the family add their handed-down dolls to the golu display, the children also give their toys to be kept in the Golu padi—though it turns out to be a tough test for them as they are not allowed to play with or touch them during the festival. This is an interesting aspect of this ritual is can be interpreted as inclusiveness and a form of connection with daily-life ‘objects’. Many of these dolls are glorified and idolised during Navratri, after which they go back to being regular toys again. The Golu dolls also form a part of the bridal trousseau in these regions.

Further, it is a custom to add at least one new doll to the Golu display each year, which helps in sustaining the craft and ensures a regular income for the craftsmen. The marapachi dolls (red sandalwood dolls) are usually given to the toddlers after the festival along with their first set of toys. Each night during the festival, lullabies are sung to put the gods to sleep and on the 10th day, the dolls are laid down from an otherwise standing position. On the 11th day, while some of them are wrapped in newspaper and cloth and stored carefully for the next year, other dolls become playthings and a source of entertainment once again.

(This is a Saha Sutra article and is based on Sahapedia-UNESCO Fellow Pratyusha Ravi’s module on Tanjore Golu Dolls. Sahapedia offers encyclopaedic content on India’s vast and diverse heritage in multimedia format, authored by scholars and curated by experts – to creatively engage with culture and history to reveal connections for a wide public using digital media.)