Moms, I don’t think you’re prepared for the knowledge I’m about to drop. So before you keep reading go ahead and clutch your pearls, reach for your smelling salts, do whatever you do when someone tells you something so earth-shattering it changes the world as you know it. Ok, ready? I’ve found the end-all, be-all of nursing-and-pumping bras. And — the kicker? — it’s actually pretty. Not like, “oh, that’s cute” pretty, but actually gorgeous in a “that can’t be real” kind of way.

When you’re headed back to work after an all-too-short maternity leave (because, America) and are putting together your pumping-at-work survival kit, you’re definitely on the hunt for the best nursing-and-pumping bra money can buy. In my opinion, it’s just as important as finding the right bag for all your pumping gear and a manager who doesn’t penalize you for taking three “breaks” throughout the work day to create liquid gold for your flesh and blood at home. (The latter of which is actually mandated by law, FYI).

But back to this bra. As I returned to work after taking 12 weeks of maternity leave, I was overwhelmed trying to think of the logistics of pumping multiple times a day without really interrupting my workflow (LOL, I was so naive). After a single day of changing out of my normal bra and into my stained and ugly AF pumping bra (that offered exactly zero in the way of support or function outside of pumping) every single time I went to pump, I began searching for one that wouldn’t require as much work. I needed a bra that would seamlessly do both — one that would support my gals at their most engorged and at their most deflated, as well as one that would make hooking up to my pump a simple process. When you’re pumping at work, you’re desperate for anything that can save you precious moments because this shit is way more time consuming than anyone could have prepared you for.

After scrolling through Amazon (because, two-day shipping) for what felt like an eternity, I found the holy grail of nursing-and-pumping bras. Enter the MOMANDA Women’s Underwire Lace Nursing Hands-Free Pumping Bra: it boasted an underwire for support, a soft and flexible material that would cradle my breasts comfortably, basic nursing clips for breastfeeding and hidden flange openings for pumping. And at just $24, the price was right. I added the black and beige colors to my cart immediately and never looked back.

Are there prettier pumping-only bras out there? Maybe. Are there more ergonomic nursing bras out there? Probably. Why did I need one that allows you to do both? Because, convenience. For me, this bra beat literally everything else on the market because it would allow me to do both while sporting an underwire and gorgeous, lacy fabric that is actually sexy. I, like many working new moms, would come home and immediately un-clip to nurse my babe. The last thing I wanted to do was change my bra. I needed one that wouldn’t necessitate a wardrobe change.

And did I mention it’s pretty? In fact, now that I’m done nursing and pumping for my first babe, I might still reach for it. (JK — this thing is stashed in a storage bin with the rest of my maternity and nursing gear that won’t see the light of day again until I’m pregnant and then nursing again.) 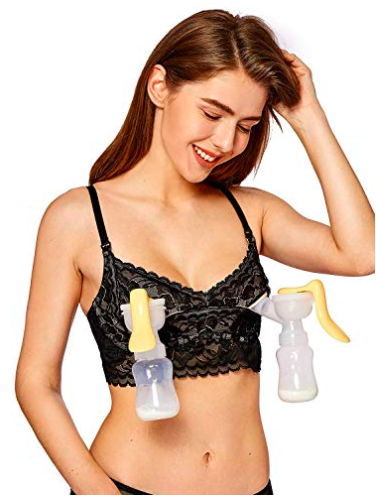