The Los Angeles Rams may have beat the Cincinnati Bengals at Super Bowl LVI yesterday, but two Rams players were celebrating a different kind of victory: being fathers!

Wide receivers Van Jefferson and Odell Beckham, Jr., were both playing in the football game and periodically checking their phones to see if their pregnant significant others would go into labor during Sunday night’s game. Jefferson’s wife, Samaria Jefferson, actually went into labor, and Jefferson posted a photo to his Instagram Story Sunday night holding his newborn son with the caption “x2!” The couple also share daughter Bella, 5. 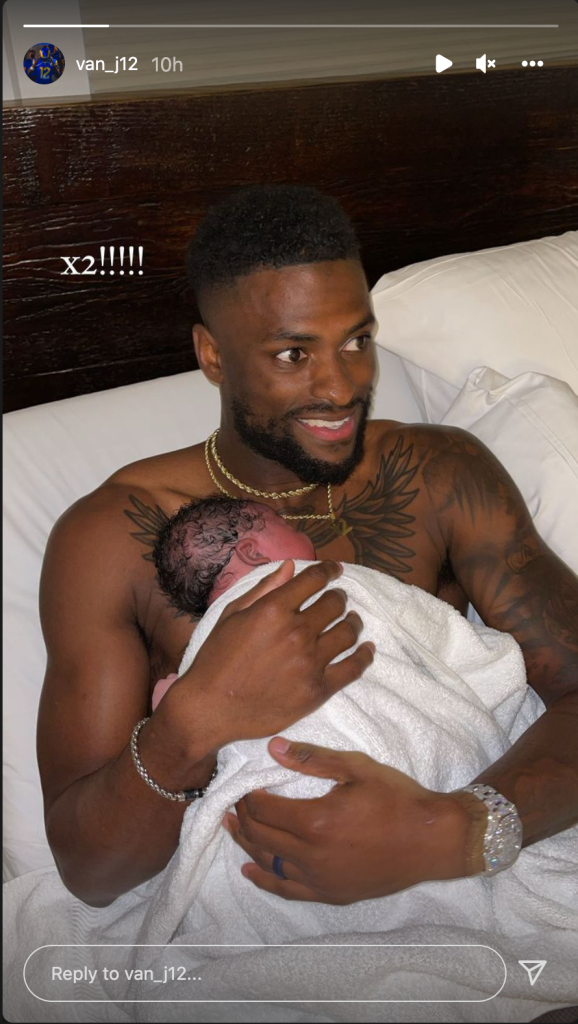 Samaria left SoFi Stadium in Los Angeles on a stretcher during the Super Bowl, according to ABC News. After the Rams’ win, NFL Game Day tweeted a video of Jefferson, captioning it: “Van Jefferson hustling out of the stadium to get to his wife in labor.”

Before the game, Samaria told The Atlantic that she didn’t want anyone telling her husband if she went into labor. “He is going to play. He is going to keep playing,” she said. “I said, ‘You play, I’ll see you at the hospital afterwards.’ That’s what it is. I will never take that moment away from him.” After the game, Jefferson said in an Instagram Live, per ESPN: “It was a great day, bro. I got three prizes today — my wife, my son and the Super Bowl.”

Beckham, Jr., on the other hand, was thankful that his girlfriend Lauren Wood hasn’t gone into labor yet. The fitness trainer is pregnant with the couple’s first child, and in an interview with The New York Post before the game, Beckham, Jr., said about Wood going into labor: “I don’t need you to put that energy in the air about the Saturday night or the Sunday thing,’’ Beckham said. “I think God has a different plan. I don’t need it during the Super Bowl. I want to see my child being born, so I’m on watch.” He also told the Associated Press, “Literally my phone is right here just in case, so I’m on call. I’m on watch. I’m on standby.”

After the Rams’ win, Beckham, Jr., was seen kissing Wood’s pregnant belly in celebration, per PEOPLE. Wood shared several maternity photos of her and Beckham, Jr., embracing last week, captioning it, “Mom & dad” with a heart.

While we love a good Super Bowl, these two babies are the real MVPs of the day! Congratulations to the two proud dads, and we wish Wood the best of luck when she goes into labor any day now!