"I hope parents don't stop their little girls from playing in the sun because they will become 'too dark'. And I hope children learn to disbelieve well-meaning adults who tell them a girl cannot be strong or that their sole duty is to fulfill their parents' dreams." 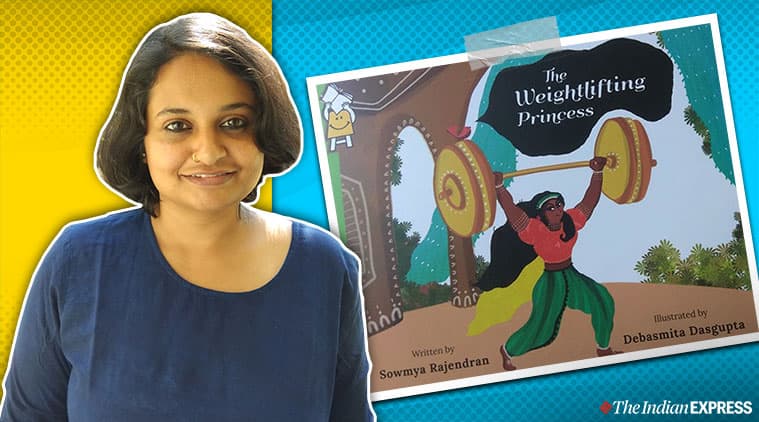 Sowmya Rajendran’s latest book The Weightlifting Princess is unlike the customary damsel-in-distress-meets-Prince-Charming plot that fairytales have usually narrated. As the title of the book suggests, the princess in this book is a weightlifter who lives her passion for the sport instead of waiting for a prince to woo her. Express Parenting spoke to the author and mother to know more about the picture book:

How did the idea of The Weightlifting Princess come about?

Pratham Books wrote to me about doing a ‘contrary princess’ story. Just a few days before this, my seven-year-old daughter had asked me why girls and women in books and films have arms which look like sticks. I was quite taken aback by that question and that’s how Nila became a weightlifter.

How is the princess in the book different from her counterparts in fairytales?

I’ve already written a book called Girls to the Rescue, published by Tulika Books, which offers alternative parenting characterisation and endings to conventional fairytales. However, The Weightlifting Princess is not a retelling but an original story. Princesses are usually described as dainty, while Nila is focused on eating well and training for her sport. Her ambition isn’t to meet Prince Charming but to become a champion. She also finds an ally in her mother, who had similar dreams when she was young. Fairytales rarely allow women to like and support each other.

In what ways do you think the book will inspire children and parents too?

I hope they will think beyond conventional gender roles. I hope parents will not stop their little girls from playing in the sun because they will become “too dark”, I hope they will recognise themselves in Nila’s father who believes marriage is her destiny and get out of that mindset. And I hope little children will learn enough to disbelieve well-meaning adults who tell them a girl cannot be strong or that their sole duty is to fulfill their parents’ dreams.

What role do you think reading plays in sensitising kids?

Books develop empathy in us; they make us imagine a life that may not be currently possible in our given circumstances. But they help to nurture the possibility that things will change. Once a story has touched you, something within you changes for life.

The book is not just about debunking the idea of a fairytale princess but also about freedom of choice. How important do you think that is for children?

Very. I feel we place way too much importance on obedience and expect children to be mini versions of ourselves, with all our prejudices. We don’t turn into adults overnight, and as a child grows older, his/her freedom of choice should expand. That’s how they learn about responsible decision-making. Also, it’s fine for children to make their own mistakes and learn from them just as we did.

Three things that parents need to remember and teach kids to raise them as feminists.

Children are not born socially conditioned about gender, it is their parents who first plant these ideas in their heads which is then reinforced by the rest of the world. So, adults should first work on breaking their own conditioning. Second, they should use the opportunity to provide alternative narratives for children; discuss popular culture with them, don’t ban it or let them consume it passively. If you watch a film where the hero slaps the heroine and she falls in love with him two scenes later, talk about why violence isn’t romantic to your child. And third, allow them to disagree with you and figure out their own politics.