Trigger warning: This post contains graphic description of the near-death of a child via drowning.

One mom is begging other parents to take water safety more seriously after her 5-year-old son nearly died in a pool accident — while surrounded by adults.

Tipton, Indiana mom Maribeth Leeson wrote about the heartbreaking near-death of her son, Adam, in a public Facebook post on July 23. The post is frankly devastating. Leeson starts off, “My son drowned 3 days ago. His limp, gray, lifeless body was pulled from the pool and it was every mother’s worst nightmare. He was dead. I heard screaming, and after a minute realized the screaming was coming from me. I watched in slow motion as people rushed to him, as he was laid on the concrete, as CPR was started.”

She credited her friend Kristin Moon as performing the CPR on Adam. Leeson said Moon kept trying to revive her son, but Leeson was certain his life as she’d known it was over. She said in the post, “I was sure even if he was saved, it was too late. I was sure machines were going to be doing his living for him.” 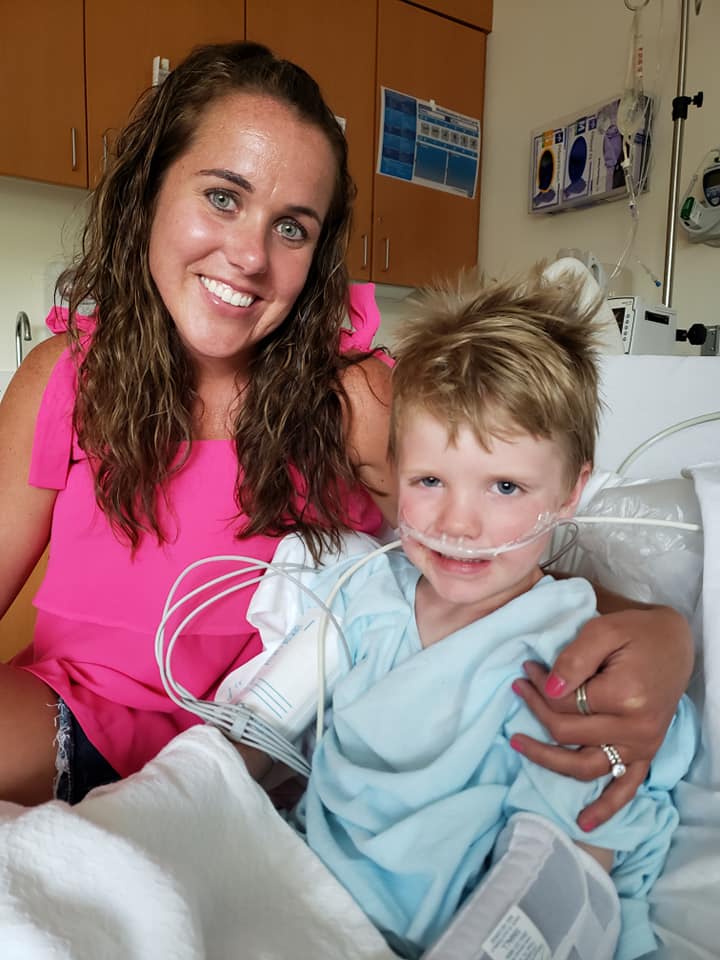 But Leeson’s son was one of the lucky few kids to actually survive a drowning.

Leeson wrote, “We have now been in ICU at Peyton Manning for the last 3 days. He is sitting beside me in bed right now playing with a stuffed puppy a friend brought to him and watching Captain Underpants for the 70th time. He’s off all oxygen. He will very likely come home with me today. Home with me 3 days after drowning, home to live happily with his family instead of us burying him today.”

She continued with the reason for her posting this private, horrific moment in her family’s life: “This happened in a pool full of people. A pool full of ADULTS. I’ve read so many stories about kids slipping away from their parents and getting into a pool, to be found drowned shortly later. I’ve never considered the possibility that my child could drown right in front of people who were watching him bob up and down from the bottom of the pool to just below the surface, but didn’t think he was struggling because he looked like he was PLAYING. When I found him myself, 2 feet from adults who were in the pool, my first thought was that it wasn’t him, that it was someone else’s kid who was seeing how long they could hold their breath. I can 100% understand why the adults who were RIGHT THERE didn’t recognize that he was drowning because when I saw him, I too thought he was just a kid who was playing….”

Her words clearly struck a chord with many other parents. Her Facebook post has been shared already more than 226,000 times and has garnered more than 48,000 comments of support and sympathy.

“This was 100% preventable. The fault was MINE,” Leeson stressed in the post. “He’s a big 5-year-old. He has a very needy twin who makes it easy for me to forget that Adam is still 5 too and has needs that other 5-year-olds need. He’s not self-sufficient even though sometimes I feel like he is because he’s so capable. I didn’t tell him to get in the pool without his Puddle-jumper on, but I was aware that he had. I simply told him to stay in the shallow end while I got his sister’s swimsuit on, then I would be over. I thought it was fine for 5 minutes, as he could touch just fine in the shallow end, he wasn’t alone because there were multiple adults IN the pool, and I’d be right next to the pool getting her suit on. Wrong. I have never ever been so wrong.”

Leeson concluded, “I’m sharing this because I want to prevent this from happening to anyone else. Before going to any pool, first make sure your kids know not to get in until the adult who is responsible for them is ready to watch them. That sounds like common sense, but I was thinking because so many adults were present, he was fine, but those adults didn’t know his swimming ability so they didn’t question when he was under water. Second, KNOW THE SIGNS OF STRUGGLE! Adam didn’t look like he was struggling! He wasn’t splashing, thrashing, or screaming. He was simply underwater and couldn’t get his head above water. Third, know CPR.”

Leeson’s post is a wake-up call to many of us who have grown a little lax about water play in the summertime. We endorse Leeson’s recommendations: definitely make sure your kids know they must wait to enter the water until their designated adult is ready to be on-duty, and know the signs of drowning (and dry-drowning), which are often far more subtle than you might expect. We’ve also put together a list of water safety tips for kids to keep on hand — because truly, when it comes to kids and water, there’s no such thing as being too safe. (P.S. Did you know the latest recommendation from child development experts is swim lessons starting at the age of one? Uh-huh.)