Kylie Jenner is officially opening up about her son’s name – or lack of name. Seven months ago, she welcomed Wolf Webster into the world, with rapper Travis Scott. A few weeks after that, the reality star and beauty mogul decided that name wasn’t quite the right fit for him.

Here’s the intel why.

During this week’s episode of Hulu’s The Kardashians, Jenner explained that she felt “pressure” to name her baby Wolf.

“We thought it was going to come to us when we saw him and it didn’t,” she said. “Then, we had to sign the birth certificate or else they register him without a name or Social Security number, so I felt the pressure to choose a name.”

Her sister Khloe had originally suggested Wolf and Jenner went along with that. She immediately knew it was the wrong choice after signing the birth certificate. “What did I just do?” she remembers thinking.

The couple now call their little one a placeholder name while they figure out what they actually want to name him. This time around, Jenner wants to be super careful with what they end up settling on. 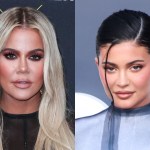 “[Travis] will … be like, ‘I really like this name.’ And I am like, ‘We can’t do this again,’” she explained. Jenner quipped that, after all this back-and-forth, they’re “just waiting for him to name himself.”

The Kardashian and Jenner family are known for coming up with unique, stand-out names — from Stormi to Saint. So, whatever Kylie and Travis decide, it’ll definitely be something super creative.

Elsewhere in the episode, Kylie opened up about how different the second birth has felt from the first — and its a new kind of mindset we can definitely get behind.

“I’m way less stressed about my weight and what I look like and more into the feminine energy and the fact I made a baby,” she said. “After pregnancy, I think it’s hard to get back to yourself. We put a lot of pressure on ourselves to be back really fast and I need to be a little nicer to myself.”

Wolf confusion aside, this second go around sounds like it has been such a calm journey for the mom. Fingers crossed for a memorable name reveal!

These are some of the reality-TV alumnae we love to follow as they tackle motherhood.