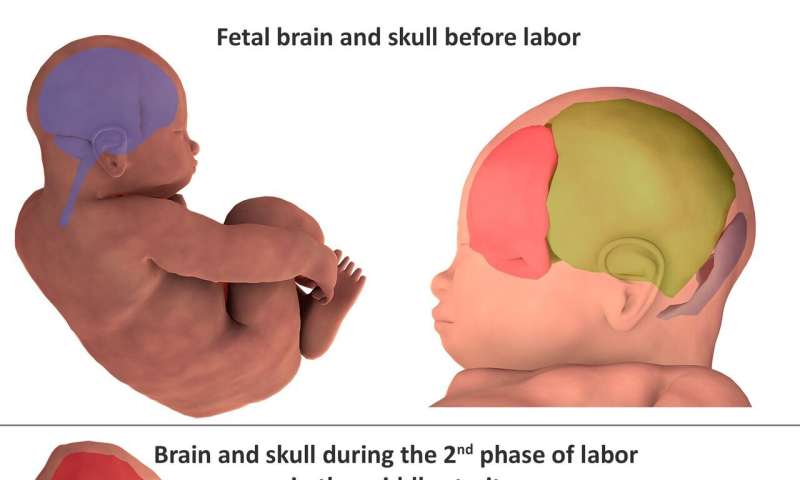 Using Magnetic Resonance Imaging (MRI), scientists have captured 3-D images that show how infants’ brains and skulls change shape as they move through the birth canal just before delivery. Olivier Ami of Auvergne University in Clermont Ferrand, France, and colleagues present these findings in the open access journal PLOS ONE on May 15, 2019.

Doctors have long known that infants’ heads change shape during birth. Termed “fetal head molding,” these changes occur during the second stage of labor, when the baby leaves the uterus and moves through the birth canal. However, the details of fetal head molding remain unclear, and only one prior study has captured images of this process.

In the new study, Ami and colleagues used 3-D MRI to capture detailed images of seven infants’ skulls and brains before and during the second stage of labor. The analysis revealed fetal head molding during the second stage of labor in all seven infants, with different parts of the skull overlapping to varying degrees among the infants. After birth, five of the newborns’ skull and brain shapes returned to their pre-birth state, but the changes persisted in two of the infants. Two of the three infants with the greatest degree of fetal head molding were delivered by emergency C-section, but the third was delivered vaginally with minimal expulsive efforts.

Overall, the findings suggest that infants experience greater skull stresses during birth than previously thought, potentially underlying the asymptomatic brain and retinal bleeding seen in many newborns after vaginal delivery. The authors note that a larger study is needed to confirm their findings, but that their work demonstrates the value of 3-D MRI in capturing fetal head molding.