Hematidrosis is a rare and unusual condition characterized by the excretion of blood through the sweat gland pores. It has been described in the Bible as occurring to Jesus Christ when he was praying in the garden of Gethsemane just before his arrest and subsequent crucifixion, and in the Middle Ages by the artist Leonardo da Vinci in a soldier facing battle. 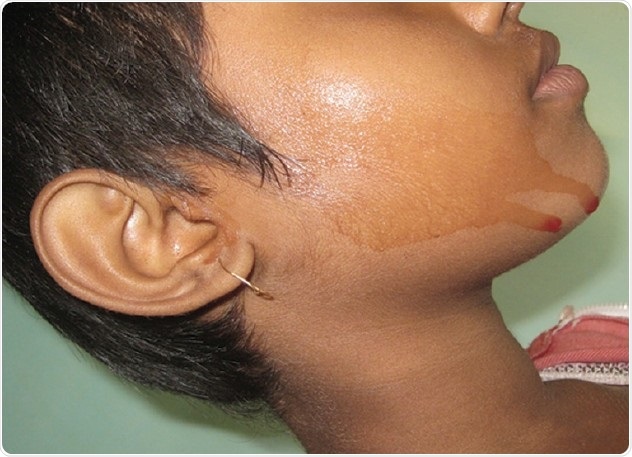 Hematidrosis has been described as a part of certain systemic diseases – including primary thrombocytopenic purpura, vicarious menstruation (which refers to the occurrence of bleeding from a body surface other than the endometrium), and strenuous exertion or intense stress.

Psychogenic purpura is another condition in which the patient experiences an allergic reaction to his own blood. As a result, the individual develops bruises, bleeding through the urine and the gut. This is not true hematidrosis, and neither is psychogenic stigmata, in which the affected individuals develop scars or wounds or simply bleeding through unbroken skin, supposed to be similar to the wounds of Christ on the cross.

In many cases women were found to develop the stigmata and features of neurosis were allegedly present. When the skin was not broken, it became raised and developed a small bluish area before a slow trickle of blood began to emerge. It is supposed that under these conditions, the capillaries surrounding the sweat glands rupture and blood escapes into the gland lumen, only to emerge through the duct openings on to the skin.

In many cases the phenomenon is preceded by severe stressful emotions or events, but in others there is no identifiable cause. The secretion is not frank blood but rather sweat tinged with blood. The blood is usually found to ooze steadily and for a prolonged time from the forehead, the nails, the navel, the nose, and even through the lacrimal duct (resulting in blood-stained tears). In some cases, each episode is preceded by a severe headache or by abdominal pain. The amount of blood lost is insignificant, but the skin becomes very tender and easily broken.

Sympathetic activation is a suspected cause in at least some of the cases because the administration of a sympathetic blocker (such as propranolol) may suppress further episodes over the next few months.

The secretion is usually more dilute than frank blood, but in some cases, it is bright red and thick. The composition of the blood is identical to that of plasma, with respect to both cellular and fluid components. Tests of coagulation such as the platelet count, platelet aggregation, and assessment of clotting factor levels fail to show any deviation from the normal. Skin biopsy is also normal even when taken immediately after the bleeding episode. Furthermore, the skin appendages including the sweat glands also appear normal.

In some patients the occurrence of hematidrosis is infrequent at first but eventually several episodes are experienced per day. The bleeding usually stops after some time without treatment. There is no history or evidence of self-laceration or other injury.