A metabolic disorder, biotinidase deficiency, is a condition in which the enzyme biotinidase becomes faulty. It is a neurocutaneous disorder and follows an autosomal recessive pattern of inheritance. Biotinidase deficiency leads to the shortage of biotin (a water-soluble B-complex vitamin) in the body. The deficiency of enzyme activity in the serum or plasma is a characteristic feature and forms the foundation of diagnosis. 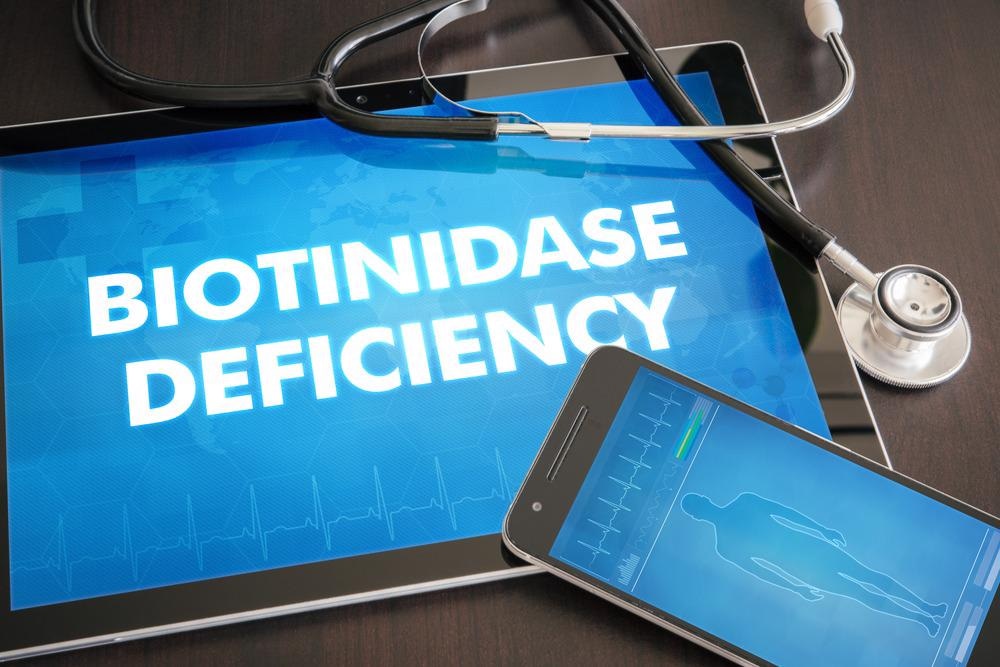 Biotinidase deficiency occurs due to pathogenic mutations in the BTD gene located on chromosome 3q25. Biotinidase deficiency occurs due to four common pathogenic variations. A seven-base deletion/three-base insertion (c.98 104delinsTCC) in exon 2, which occur in at least one allele in approximately 50% of children, and p.Arg538Cys in exon 4, present at least once in 30% of children, are the two most commonly reported variants among children diagnosed because of clinical symptoms.

As revealed by neonatal screening, p.Gln456His, which is associated with significant insufficiency, and p.Asp444His, which decreases enzyme activity by around 50%, are the two other reasonably common variations.

Eczema, skin rashes, and viral and fungal infections are all examples of cutaneous symptoms of immune dysfunction. There are scaly erythematous plaques on the flexors and perioral areas, as well as seborrheic dermatitis-like eruptions. Crusting, lichenification, and open lesions that could become secondary infections can be noticed in severe cases.

Metabolic symptoms of BTD comprise organic aciduria, ketolactic acidosis, and mild hyperammonemia. Untreated profound biotinidase deficiency symptoms often occur between the ages of one week and ten years, with an average age of 3.5 months. Some children with biotinidase deficiency have just one symptom. Whereas some others may develop a culmination of several neurological, cutaneous, or biochemical manifestations. Patients with severe BTD begin to show symptoms of the disease at a young age.

Seizures and hypotonia are the most common neurologic symptoms in people with untreated profound biotinidase deficiency. Seizures are typically myoclonic, but they can also be grand mal or focal, and some children experience infantile spasms. Spinal cord illness, characterized by progressive spastic paresis and myelopathy, has been seen in certain untreated children.

Ataxia and developmental delays may emerge in older affected youngsters. On magnetic resonance imaging or computed tomography of the brain, many symptomatic children with biotinidase deficiency show a range of central nervous system disorders.

If untreated, almost all children with significant biotinidase deficiency develop symptoms or are at risk of developing symptoms. Several persons with severe biotinidase deficiency have never shown symptoms, according to family research. Furthermore, numerous sick children's enzyme-deficient siblings appear to have never shown symptoms. It's probable that if these people are stressed, they may develop symptoms.

Biotinidase is a monomeric enzyme with 543 amino acid residues, including 41 amino acids from a potential signal peptide, that is encoded by a single gene (BTD) on chromosome 3p25. The gene covers at least 23 kilobases of genomic DNA and is made up of four exons and three introns, indicating a straightforward structural arrangement that makes genotyping patients easier.

It is made of four exons, numbered 1–4, with sizes of 79, 265, 150, and 1,502 base pairs, respectively. According to Northern blot analysis utilizing a 2,000-bp probe containing the cDNA sequence, the biotinidase message is found in the human lung, liver, heart, brain, kidney, pancreas, skeletal muscle, and placenta.

The disease's prevalence varies by country. The global incidence of BTD ranges from 1:40,000 to 1:60,000 births. Turkey's nationwide newborn screening program indicated a high rate of infection. According to the figures by the Ministry of Health, the incidence is roughly 1:7,116.

In countries like Turkey and Saudi Arabia, a higher rate of consanguinity contributes to an increase in the prevalence of BTD. It is prevalent in Brazil with an incidence of 1:9000. According to data from 2006 newborn screening results, the incidence of profound BTD in the United States is 1:80,000 infants, with partial deficiency ranging between 1:31,000 and 1:40,000.

Diagnosis is based on the evaluation of biotinidase activity using a radioassay in serum, plasma, fibroblasts, leukocytes, and other tissue extracts. Biotinidase deficiency, both complete and partial, is predicted to affect 1 in every 60.000 people worldwide.

Oral biotin (free form) is used to treat biotinidase deficiency. Biotin is almost exclusively available in the free form at pharmacies and health food stores. Biotin therapy is a lifelong treatment. With biotin treatment, children with biotinidase deficiency discovered by newborn screening will stay asymptomatic. Treatment with 5–10 mg of oral biotin per day helped all symptomatic children with BTD. Although, certain symptoms, like hearing loss, developmental delay, and optic atrophy, are usually permanent and irreversible once they occur.

In symptomatic people, adhering to biotin therapy improves their symptoms. After biotin treatment, the biochemical anomalies and seizures disappear quickly, and the cutaneous abnormalities improve. In children with alopecia, hair growth recovers over weeks to months. Optic atrophy and hearing loss may be permanent with treatment, especially if there has been a considerable time between the beginning of symptoms and the start of treatment. Even in high quantities, biotin is deemed safe and non-toxic.

During her time at AZoNetwork, Emily has interviewed over 200 leading experts in all areas of science and healthcare including the World Health Organization and the United Nations. She loves being at the forefront of exciting new research and sharing science stories with thought leaders all over the world.