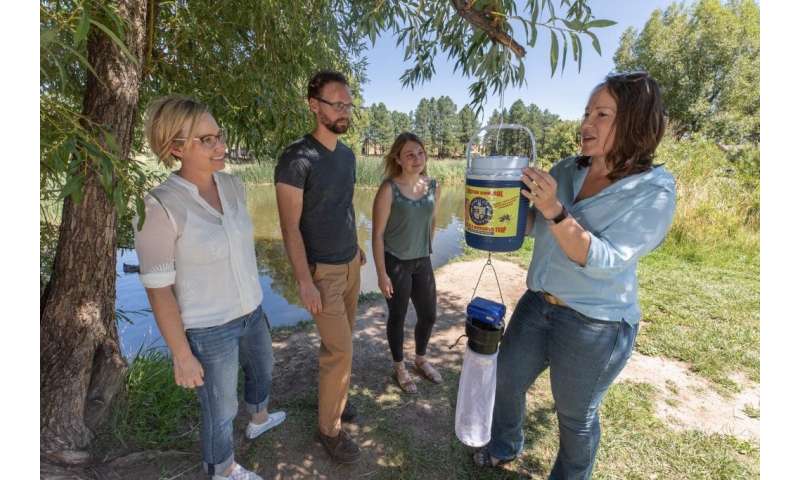 After sequencing more than 400 different genomes of the West Nile Virus, an NAU scientist discovered the two reports of West Nile Virus in Coconino County came from two different places. One migrated north from the Phoenix area. The other is a bit more of a mystery.

It started with samples from throughout the western United States arriving at the lab of evolutionary biologist Crystal Hepp, who works with both the School of Informatics, Computing, and Cyber Systems and the Pathogen and Microbiome Institute at Northern Arizona University. She collaborates with a dozen different public health departments throughout the West. They send her West Nile (WNV) samples found in their areas, and her team sequences the viral genomes and analyzes the data to reconstruct each sample’s family tree, which allows her to determine how the virus is moving over time and throughout the region.

In this case, Coconino County Health Department sent her the two samples, one found in mosquitoes at Lake Mary and one in the Cheshire area, both in late August. Hepp sequenced the genomes of the virus strains, compared them to the virus strains she’d sequenced from other areas, and found that the two virus strains did not result from local circulation of the virus, meaning they were not transmitted among birds and mosquitoes in the county. The Cheshire strain is closely related to strains circulating in Maricopa County, while the Lake Mary strain is most closely related to a strain her team sequenced from Montana in 2018, though the Lake Mary strain showed several different mutations from the Montana strain.

“We often think the simplest answer is the most likely answer,” she said. “It would have made sense if these two strains, separated by only 10 miles, were due to the same importation event. From a public health perspective, finding that these two strains are from two different places is good news. If they were closely related, it would mean that WNV had likely been cycled through birds and mosquitoes across 10 miles of Coconino County. We hope that the two separate introductions have just been cycling in the very localized geographic locations they were found, rather than across 10 miles, and that they just fade out.”

“We are very interested in understanding the connectivity among strains circulating in the Southwest,” Hepp said. “This is allowing us to determine, for example, the WNV situation in Maricopa County is for other southwestern locations. WNV from Maricopa County has additionally spilled over into Washington County, Utah; Riverside County, California; and Yuma County, Arizona in the past, and we would like to move forward with a predictive model that could inform counties of risk based on historical patterns and environmental data.”

No human cases of West Nile have been reported in Coconino County since 2010.