Getting Rid of Ammonia

Ammonia can be produced by the break-down of amino acids, or by the gut bacteria in humans. If the level of ammonia in the blood becomes too high, then it becomes toxic to the brain.

The urea cycle removes ammonia from the blood and makes urea, which is eventually excreted as urine. This cycle is carried out by the cells of the liver, and as the name suggests the last step of the process feeds in to an earlier step of the cycle. 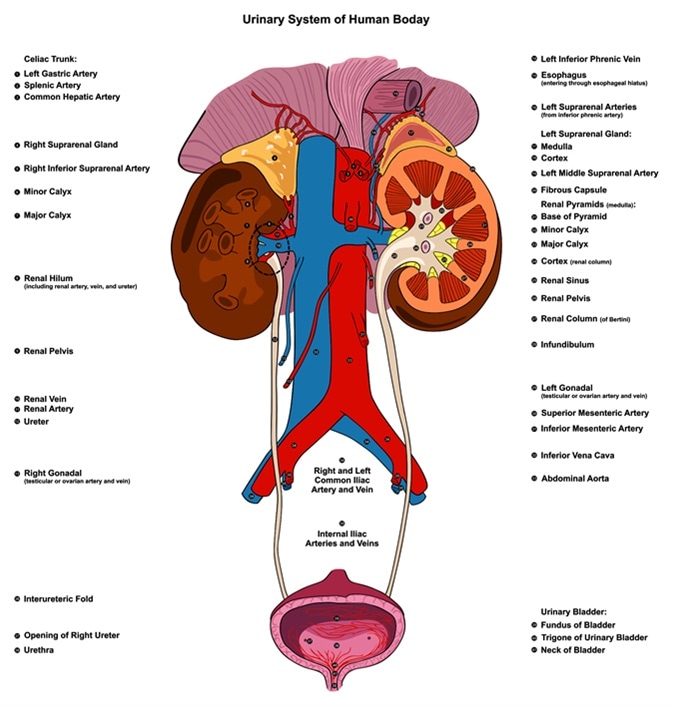 Summary of the Steps in the Urea Cycle

Ammonia is formed by the break-down of amino acids/gut bacteria.

The first two steps of the urea cycle occur in the mitochondria of the cell. First, the enzyme carbamoyl phosphate synthetase (CPS) takes ammonia and bicarbonate, and forms carbamoyl phosphate with the use of ATP. This is the step in the cycle which determines how fast the cycle progresses. N-acetylglucosamine is also required for CPS to function, and functions as a regulator for the formation of urea.

Ornithine transcarbamoylase (OTC) then condenses carbamoyl phosphate and ornithine, which forms citrulline. This citrulline is then moved out of the mitochondria into the cytosol of the cell by the transporter SLC25A15.

Argininosuccinate synthetase (AS) takes the citrulline formed in the mitochondrial stage, and condenses it with aspartate to form argininosuccinate. This occurs by the formation of an intermediate, citrulline-AMP.

The ornithine is then transported into the mitochondria by ornithine translocase. There, it is used by OTC again, to form citrulline. The citrulline is then processed to form urea and ornithine again, and the cycle continues. During the cycle, urea is the only new product which is formed, while all other molecules used in the cycle are recycled.

What Happens When the Urea Cycle Goes Wrong?

If there is a problem with the urea cycle, then the level of ammonia in the blood will rise, causing hyperammonemia. Ammonia is able to cross the barrier between the bloodstream and the brain. Once it enters the brain, it can stop the TCA cycle by depleting one of the metabolites, α-ketoglutarate. This means that these brain cells cannot make energy, ultimately leading to its death. This eventually will lead to neurological problems, which can be as severe as irreversible brain damage.

Problems can be caused by things such as damage to the liver (cirrhosis) or by an inherited defect in one of the above enzymes. In both cases, the level of ammonia rises with the potential consequences listed above.

Inherited urea cycle defects are part of “inborn errors in metabolism”, and are known as “urea cycle disorders”. Symptoms usually present in newborns around 24-48 hours after birth. The most severe symptoms are seen in newborns with a defect in CPS.

Treatment for hyperammonemia consists of removing protein from the diet, removing the excess ammonia and supplementing with molecules of the urea cycle which are missing. Also, sodium benzoate and sodium acetate can be used to form ammonia-containing compounds which can be excreted through feces. The sugar lactulose was shown to reduce the production of ammonia by the gut bacteria, as well as promoting the excretion of ammonia through feces. Alternatively, antibiotics can be used to eliminate the ammonia-forming gut bacteria.

Dr. Maho Yokoyama is a researcher and science writer. She was awarded her Ph.D. from the University of Bath, UK, following a thesis in the field of Microbiology, where she applied functional genomics toStaphylococcus aureus . During her doctoral studies, Maho collaborated with other academics on several papers and even published some of her own work in peer-reviewed scientific journals. She also presented her work at academic conferences around the world.