Human’s often suffer blindness because of their inherited retinal dystrophies or degeneration of eye muscles, a common age-related problem. The usual available corrective treatments have many limitations. This article discusses the development of a new ground-breaking nanotechnology-based retinal prosthesis, which could play a crucial role in the treatment of many retinal problems. 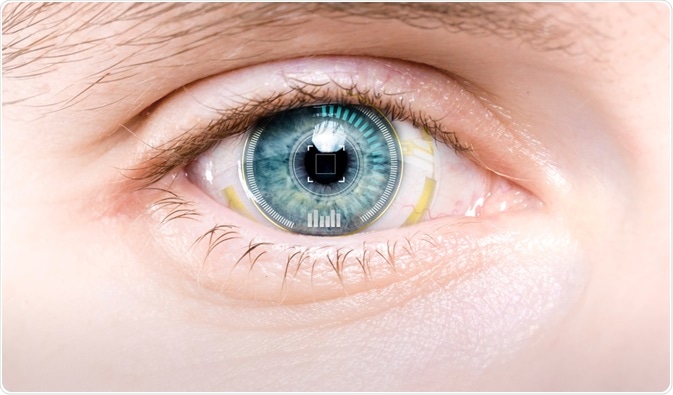 What is a Retinal Prosthesis?

Light is detected by photoreceptors in our eyes, i.e., rods and cones, through photosensitive molecules present in the outer part of the photoreceptor of a healthy retina.

Upon activation, these photosensitive molecules stimulate an array of neurochemical events that ultimately sends signals to the visual segments of the brain. Primarily in the case of retinal degenerative diseases such as retinitis pigmentosa and age-related macular degeneration (AMD), photoreceptors are adversely affected and the retina fails to sense light. However, the associated neurons in the retina remain functional and can be electrically activated when the nerve is stimulated.

Retinal prostheses offer restoration of vision to people suffering from retinitis pigmentosa or progressive disintegration of photoreceptors of the retina that cause blindness. In 1990, retinal prosthesis was established. The technique involved the temporary implantation of an array of stimulating objects into the eyes of a blind subject.

The procedure subjected the blind subject (rodent) to local anesthesia, and a probe was inserted into the eye. This probe held electrodes required to stimulate the retina. This experimental procedure revealed spatial mapping or retinotopic organization, i.e., when the retina of the right eye was stimulated using the electrode probe, the blind subject could sense light on the left and vice versa.

The Role of Nanoparticles in the Development of the Artificial Retina

Considering the drawbacks of the existing methods, Italian scientists at IIT-Istituto Italiano di Tecnologia (Italian Institute of Technology) have discovered an innovative, rapid, accurate, and highly sensitive technology for the treatment of retina-related diseases.

Their technology is based on photoactive polymer nanoparticles (P3HT NPs) whose size is around 350 nanometres. The scientists have developed an injectable artificial liquid retinal prosthesis that works on correcting the dysfunctional photoreceptors. The researchers said that their work is an application of nanotechnology to medicine.

When the rat with retinitis pigmentosa was subretinally injected with an artificial liquid retinal prosthesis, i.e., conjugated polymer nanoparticles, the P3HT nanoparticles spread out extensively over the entire subretinal space. After this, it initiated the light-evoked activation of spared inner retinal neurons, retrieving the cortical, subcortical, and behavioral visual responses in the absence of trophic effects or retinal inflammation.

The patient who has blindness due to age-related muscle dystrophy or retinitis pigmentosa regained their vision only after a single injection. The main advantage of the improved 'second generation' artificial retina and its liquid form is that it can imitate the properties of the biomaterials and impart high spatial resolution. The photoactive polymeric nanoparticles are suspended in the aqueous component of the retinal prosthesis and can electrically trigger existing retinal neurons when light reaches the nanoparticles.

Scientists said that polymer nanoparticles behave as “tiny photoelectric cells”, based on carbon and hydrogen, which can replace the dysfunctional photoreceptors.

Lead researcher Fabio Benfenati is highly optimistic about their creation of artificial liquid retinal implants for the treatment of degenerative blindness and ensured that their product offers a wide-field and high-resolution vision.

Benfenati said that the inclusion of photoactive polymers in particles that are smaller than the photoreceptors increases the level of interaction with the active surface of the retinal neurons. It also ensures a smooth spread across the entire retinal surface, and scale photoactivation at the level of one photoreceptor.

How is the New Liquid Retina Prosthesis better than the Existing Technology?

As mentioned previously, the major drawbacks of the existing retinal prosthesis that limit their applications are listed below:

The new artificial liquid retinal prosthesis ensures a rapid treatment. It also provides a less traumatic surgery, i.e., the procedure only requires microinjections of nanoparticles directly under the retina.

Following this, the injected particles cover the entire retinal space and replace the degenerated photoreceptors. Grazia Pertile, Director at Operating Unit of Ophthalmology at IRCCS Ospedale Sacro Cuore Don Calabria has rightly pointed out another advantage of polymeric retinal prostheses, i.e., restoration of natural light sensitivity of the polymeric nanoparticle.

The procedure also does not need further protection post-treatment, i.e., the use of glasses, cameras, or external energy sources. Under laboratory conditions, the process has proved to be highly effective and beneficial to numerous patients with blindness.

This research is still in its preclinical stage, and further experimentations are required for its validation and utilization for clinical treatment of diseases related to retinal degeneration.

The scientific community believes that the development of such photosensitive nanomaterials is a revolutionary discovery that opens a new avenue for future research in neuroscience and medicine.

Priyom graduated from the University of Madras, India, with a PhD in Plant Biology and Plant Biotechnology.