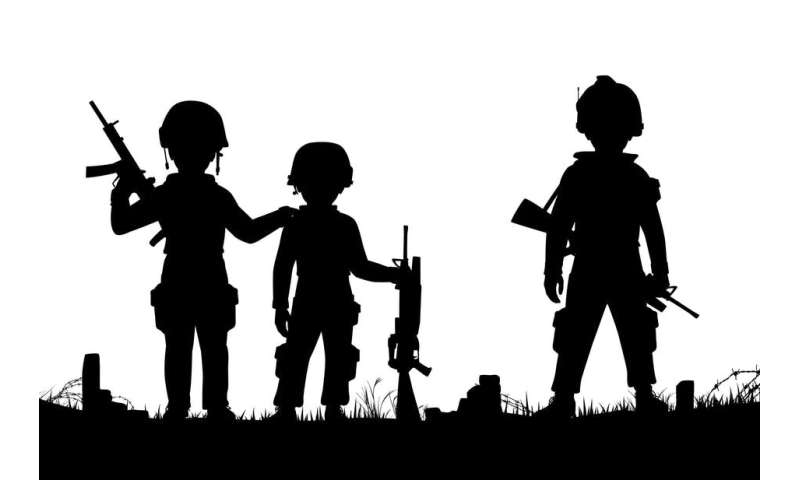 The reintegration of former child soldiers is a key mandate of humanitarian organisations across the globe.

In most African war-torn countries, child soldiers’ reintegration strategies tend to revolve around the vocational training and mainstream education. Such operations are characterised by uneven or limited success.

Accordingly, unlucky former child soldiers find themselves stuck in a cycle of war. This has been the case in Sudan, and Angola as well. Liberia is no exception. A former Liberian child soldier alluded to his struggles to reintegrate, saying “we were soldiers. Now we are parasites”. This is partly because researched suggestions for proper reintegration are not incorporated. It’s also due to traditional humanitarian practices which ignore alternative reintegration measures.

My research draws on Liberia’s civil war experiences to find alternatives to traditional reintegration processes. Liberia’s approach also focused on vocational training and mainstream education. But insights gained from my interviews with former Liberian child soldiers showed that even though they’d gained useful skills from the war, these weren’t used in any way during the reintegration process.

For example, some young veterans gained medical skills from nursing the wounded, while others learned how to gather intelligence, and to plan logistical operations. Some even learned how to build and lead teams. These abilities were largely ignored.

I would argue that conventional reintegration strategies have had limited success because they don’t pay as much attention to positive war legacies. I think an approach centred on the wartime roles of former child soldiers would be more productive than one that has a singular education focus.

There is a nexus between the wartime roles of young veterans and their successful reintegration into post-war society. They gain skills during wartime which they can utilise in their reintegration. This nexus is often ignored by the conventional reintegration strategies that are routinely backed by the international community.

Some might argue that attempts to use the wartime roles of former child soldiers in the reintegration process will simply promote a post-war militarist agenda. I don’t believe this is true. What I’m arguing for is that reintegration programmes should try and isolate and emphasise wartime skills and abilities for optimum use in post-war scenarios.

Part of the reason for arguing this case is that there’s evidence that conventional reintegration programmes are insufficient. The main reason seems to be that they prioritise mainstream education and vocational training.

There are other reasons too. These include the complex and hasty way in which conventional reintegration programmes are implemented. It’s also due to inadequate peace building operations, the failure to understand the mindset of young veterans and the politicisation of humanitarian responses.

Another shortcoming is that conventional approaches to reintegration treat former child soldiers as victims since their age of criminal liability remains a thorny question in international law. Local and international humanitarian organisations and agencies, child rights advocates, and the United Nations are often geared towards an idealised idea that children can recover their lost childhood.

This limits the capacity of young veterans because it takes away their power to contribute to the rebuilding and refashioning of their own lives. Some scholars have challenged the victim narrative by engaging in a victim-perpetrator discourse.

Incorporating wartime skills, experiences, abilities, and networks can be an invaluable asset for young veterans in refashioning their lives and recasting their childhoods. For instance, the young veterans who acquired medical skills by nursing the wounded could be supported to enter the medical profession.

Other young veterans could join the post-war military or paramilitary, where skills gained through their combat and intelligence roles could be professionalised and used in the interest of society. They may also pursue their education within the military complex.

These are compelling reasons why novel approaches to the reintegration of child soldiers should be explored. Young veterans do need an education, but they would benefit more from learning that is designed to build on skills they already have. A conventional classroom environment is limited in its ability to transform former child soldiers into citizens with pro-social behaviour.

This is the case because traditional learning approaches may not take into account some salient factors including the recruitment age of former child soldiers, the nature of the armed groups in which they served, the roles they played during the war, and their personal desires and ambitions.

There’s no doubt that the traumatic experience of some young veterans can overshadow any positive aspects of their involvement in armed conflict. However, some war legacies can plant the seed for a fruitful future. The wartime roles played by child soldiers can form the basis for a new beginning.