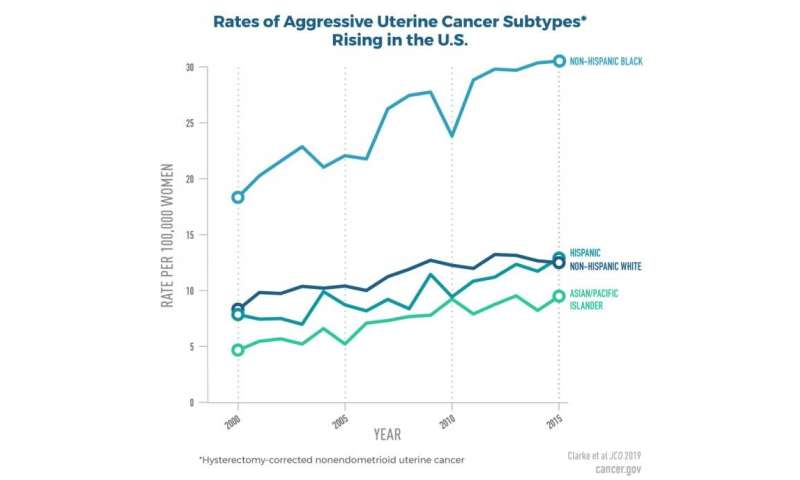 New findings from a study by researchers at the National Cancer Institute (NCI), part of the National Institutes of Health, show that U.S. incidence rates for aggressive subtypes of uterine cancer rose rapidly among women ages 30 to 79 from 2000 to 2015. The findings also reveal racial disparities, including higher incidence of these aggressive subtypes and poorer survival—irrespective of subtype and cancer stage—among non-Hispanic black women than among women in other racial/ethnic groups.

The study, published May 22, 2019 in the Journal of Clinical Oncology, used population data from NCI’s Surveillance, Epidemiology, and End Results (SEER) database to evaluate trends in uterine cancer incidence rates for women overall and by race and ethnicity, geographic region, and histologic subtype (subtypes differentiated by how tumor tissue appears under a microscope). The authors corrected for hysterectomy prevalence, using data from the Behavioral Risk Factor Surveillance System, in estimating incidence rates of uterine cancer because women who have had a hysterectomy are no longer at risk for developing the disease. Many past studies of uterine cancer incidence did not include such a correction.

“Incidence rates of uterine cancer have been rising, and there have been previous reports of racial differences in incidence and survival rates, with disparities observed for non-Hispanic black women,” said Megan Clarke, Ph.D., lead author of the study and a postdoctoral fellow in NCI’s Division of Cancer Epidemiology and Genetics. “But few recent studies have corrected for hysterectomy, which can vary by race and ethnicity and by region. Correcting for hysterectomy prevalence gives us a more accurate picture of trends in overall incidence, as well as rates by race and ethnicity.”

Incidence rates of endometrioid subtypes were stable in non-Hispanic white women over the study period and increased in women of other racial/ethnic groups. By contrast, incidence rates of aggressive, nonendometrioid subtypes have been increasing dramatically over time in all racial/ethnic groups (overall increase of 2.9% per year from 2000 to 2015). The researchers also observed much higher rates of the aggressive, nonendometrioid subtypes in black women (25.9 per 100,000 women over the study period) than in white women (11.4), Hispanic women (10.1), and Asian/Pacific Islander women (7.5).

“All of these trends—the rates of uterine cancer among black women exceeding those of white women, the higher incidence rates of nonendometrioid subtypes among black women, and the lower survival rates of black women for all uterine cancer—are very concerning,” Dr. Clarke said. “We need to continue research to further understand these racial differences and disparities, in order to help us better predict risk and work toward prevention.”

One key message from this study is that these aggressive, nonendometrioid cancers are increasing for all women, Dr. Clarke said. She explained that because these cancers are much rarer than endometrioid subtypes, less is known about them. Important next steps include conducting research on the underlying causes of these subtypes to improve risk prediction and early detection of all uterine cancers.

The increasing incidence of nonendometrioid subtypes is not likely explained by the rising prevalence of obesity and changes in use of hormone replacement therapy, as these factors are more strongly associated with the endometrioid subtypes, the rates of which remained more stable over the study period, Dr. Clarke explained.