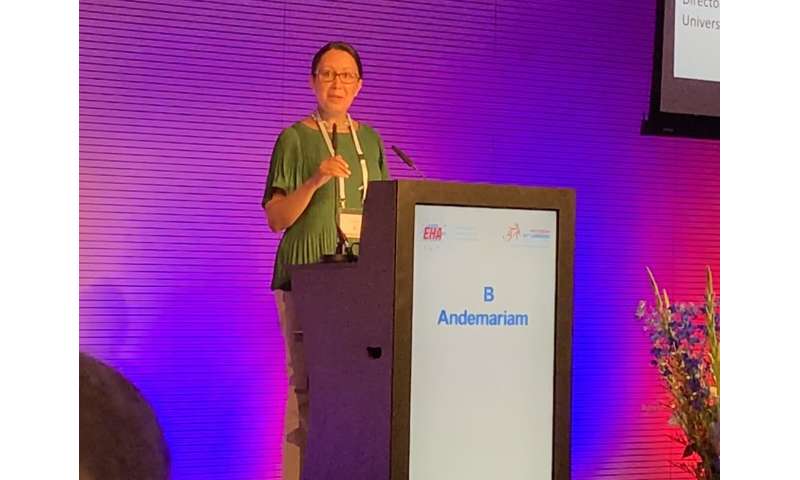 An investigational drug for the treatment of sickle cell disease is showing early promise in clinical trials for impacting biomarkers of the disease in patients, reported UConn School of Medicine researchers at the European Hematology Association Congress in Amsterdam this week.

For the rare, painful red blood cell disease, which impacts blood circulation, pre-clinical laboratory data had already illuminated the potential of the experimental drug IMR-687 for reducing both the sickling of red blood cells and blood vessel blockages. The drug was shown to reduce these two major culprits that lead to sickle cell disease’s debilitating pain, organ damage, and early mortality of patients—who have an average life expectancy of 40. That is why the drug has been granted U.S. Orphan Drug Designation, U.S. Rare Pediatric Designation, and Fast Track Designation by the Food and Drug Administration (FDA).

After 13 weeks of testing in its current clinical trial, the orally administered, once-a-day phosphodiesterase 9 (PDE9) inhibitor in adult patients with sickle cell disease is demonstrating tolerability and the ability to impact both red and white blood cell biomarkers of the disease, says Dr. Biree Andemariam, lead investigator for the clinical trial, associate professor of medicine at UConn School of Medicine and director of the New England Sickle Cell Institute at UConn Health.

“These initial Phase 2a data demonstrate the potential of IMR-687 to significantly impact key biomarkers associated with the pathology of this serious disease,” she says.

A biomarker is a measurable indicator of a biological condition, often evaluated to examine normal biological processes, pathogenic processes, or pharmacologic responses to a therapeutic intervention.

The clinical trial is evaluating the safety, tolerability, pharmacokinetics, and pharmacodynamics of escalating doses of IMR-687 administered once daily for 16 to 24 weeks in two groups of patients with sickle cell disease.

Patient groups include those receiving the current standard of care dose of hydroxyurea—a drug that helps reduce the frequency of pain episodes in sickle cell patients—and those who are not on hydroxyurea. Their white and red blood cell markers and quality of life are also being analyzed.

At 13 weeks, there has already been a significant increase in the percent of F-cells, the red blood cells containing fetal hemoglobin (HbF) that often precede rises in total HbF. Also, there has been a corresponding decrease in absolute reticulocyte count and the percentage of reticulocytes, the immature red blood cells produced by the body’s bone marrow, along with a trend toward improved pain.

The clinical trial study also found patients had no clinical significant changes in white blood cell counts and no evidence of neutropenia, a reduction in the level of white blood cells needed to help fight infection.

“The interim Phase 2a data reflect trends that could be indicative of meaningful clinical translation of these important measures in sickle cell disease,” Andemariam adds.

Imara Inc., the maker of the drug and sponsor of the clinical trial, is a clinical-stage biopharmaceutical company developing novel therapies for sickle cell disease and other inherited blood disorders.

“We are encouraged by this interim Phase 2a analysis that reinforces our belief in the potential of IMR-687 as a single oral, once-a-day therapeutic,” said Rahul D. Ballal, chief executive officer of Imara. “IMR-687 uniquely targets both red cell and white cell aspects of the disease, and we are working to expeditiously advance this novel therapy through clinical development, with a goal of delivering it to patients with SCD who are in need of innovative treatment options.”

More clinical trial data is expected to be shared later in 2019.