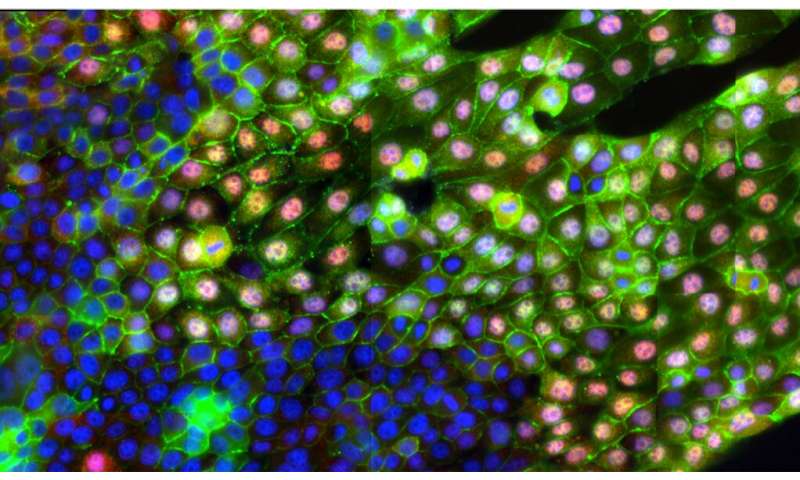 Yale researchers have discovered how metastasis, the spread of cancer cells throughout the body, is triggered on the molecular level, and have developed a tool with the potential to detect those triggers in patients with certain cancers. The discovery could lead to new ways for treating cancer.

The study was led by Andre Levchenko, the John C. Malone Professor of Biomedical Engineering and director of the Yale Systems Biology Institute at Yale’s West Campus. It was published June 26 in the journal Nature Communications. Levchenko is a member of the Yale Cancer Center.

One way metastasis occurs is through epithelial-mesenchymal transition (EMT), a process that breaks neighboring cells apart from each other and sets them in motion. It’s been long assumed that chemical signals or genetic changes in the cells trigger EMT. But Levchenko’s research team found that it could be caused by a simple change in the texture of the extracellular matrix (ECM), which acts as a scaffold for cells. They discovered that an alignment of the matrix’s fibers (a common biological occurrence) can trigger the EMT process without or other stimuli.

“It became clear that in some cancers, before the cells move away from the tumor and spread, there’s a change in the environment,” Levchenko said. “When these fibers in the matrix align, they create tracks in which the cells move, and we found how it is controlled by complex molecular networks.”

With a method they devised that mimics the cell environment, the researchers explored the EMT process at the molecular level and discovered two separate feedback mechanisms —that is, two or more molecules inhabiting or activating each other. One connected the protein known as YAP to the gene regulator WT1, causing cells to break from each other. The other connected YAP to the protein TRIO, triggering the cells into motion and even increasing their speed.

Combining experimental analysis and clinical data, the researchers confirmed that this mechanism is active in kidney cancers.

“This information can potentially be used to develop new prognostic tests and pave the way for more personalized clinical interventions,” said Levchenko.

The discovery could also lead to new treatments for cancer by targeting the molecules with drugs and other means to discourage the cells from undergoing the EMT process, he said. “That would be a very big deal because most of the fatal outcomes we see in cancer are due to metastasis, and therefore, often the EMT process.”