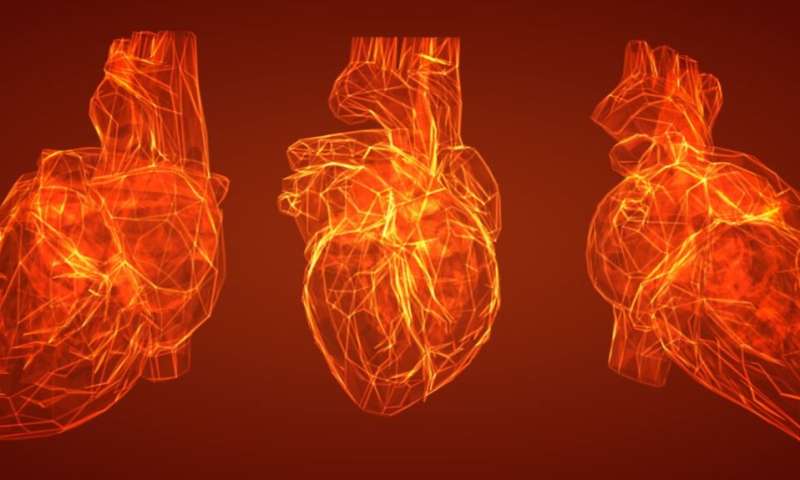 Hypertrophic cardiomyopathy is the leading cause of sudden cardiac death in young people (such as the unexpected near fatal cardiac arrest suffered by the-then 23 year old footballer Fabrice Muamba), but the microscopic heart muscle abnormalities behind these tragic events can only be picked up in a post-mortem.

Now, in a study published in the Journal of the American College of Cardiology, a team of RDM researchers have borrowed a brain imaging technique to spot the tell-tale disarray in heart muscle fibers that could set off a potentially fatal heart rhythm in hypertrophic cardiomyopathy.

This is the first time that these tell-tale signs can be spotted in living patients.

Hypertrophic cardiomyopathy is an inherited condition in which part of the heart muscle becomes much thicker. 1 in 500 people across the world have this condition, some with complications such as heart failure and stroke, while others have no symptoms and normal life expectancy. But even patients with no symptoms are still at risk of dying suddenly.

When seen under a microscope, muscles fibers from the hearts of patients who have died suddenly of the condition are arranged abnormally, and don’t have the usual alignment that allows heartbeats to spread evenly across the heart’s muscle fibers. This fiber disarray therefore provides the perfect focus for potentially deadly heart rhythms.

Spotting this disarray would let doctors intervene before a sudden cardiac arrest happens, by fitting an implantable cardioverter defibrillator, a small device that kick-starts the heart into beating normally again when it detects life-threatening heart rhythms. But the heart muscle fibers that show this abnormality can’t be taken from living people, and the disarray can only be seen in post-mortem samples.

So a team of researchers led by Professors Hugh Watkins and Stefan Neubauer used a technique called diffusion tensor magnetic resonance imaging to track the spread of water molecules within the heart’s muscle to check for muscle fiber disarray noninvasively.

This imaging technique has been very successful in tracking the paths of nerve fibers in the brain, but it’s much harder to use with an organ such as the heart, which is moving all the time.

“The problem is that the large movements of a beating heart dwarf the microscopic diffusional motion of the water molecules that we are trying to measure,” said Dr. Liz Tunnicliffe, study co-author and lead magnetic resonance physicist who developed the diffusion tensor imaging technique for the study. “Recent advances in magnetic resonance technology have now made diffusion tensor imaging of the heart feasible in humans.”

“We also minimized cardiac motion by scanning patients and healthy volunteers at the same point in each heartbeat, when the heart relaxed.” said Dr. Ariga, who is also a working NHS cardiologist and academic clinical lecturer within the National Institute for Health Research Oxford Biomedical Research Centre.

Using their new scan technique, the team were able to see similar heart muscle disarray patterns in their living hypertrophic cardiomyopathy patients that previous post-mortem studies had found. Patients with the imaging “marker” of disarray were also more likely to have abnormal heart rhythms.

“This is the first time that we’ve been able to assess disarray noninvasively in living patients with hypertrophic cardiomyopathy,” said Dr. Ariga. “We’re hopeful that this new scan will improve the way we identify high-risk patients, so that they can receive an implantable cardioverter defibrillator early to prevent sudden death.”

“We now need to work on making this scan shorter and faster for patients so that we can test its utility in a large multicenter study.”

Professor Metin Avkiran, Associate Medical Director at the British Heart Foundation said: “Every week in the UK, 12 people under the age of 35 die following sudden cardiac arrest. Many of these deaths are due to inherited heart conditions, of which hypertrophic cardiomyopathy (HCM) is the most common.

“This exciting research opens up the possibility of using a non-invasive scan to better spot heart muscle changes in people with HCM, find those at risk of a sudden cardiac arrest and ensure they receive the best preventative care.