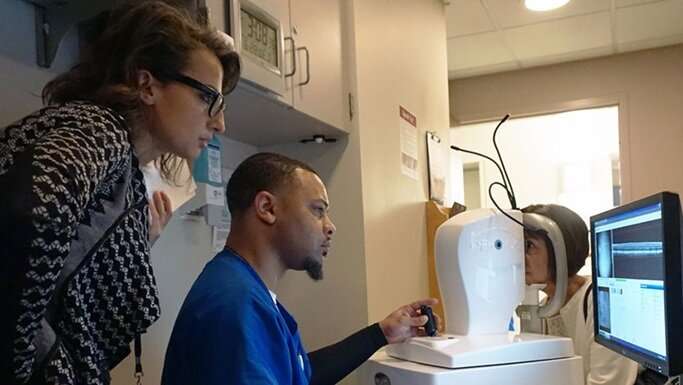 Ophthalmologist and retinal surgeon Dimitra Skondra, MD, Ph.D., knows that developing any new treatment can be fraught with false hopes and unexpected setbacks. She is cautiously optimistic, however, that a new method she and her colleagues are developing to treat macular holes with eye drops means some people can avoid having invasive surgery to fix the vision problem.

“Our experience shows that the macular holes in some patients respond to a course of prescription eye drops and end up closing,” said Skondra, the director of the J. Terry Ernest Ocular Imaging Center at the University of Chicago Medicine.

Skondra, a retina specialist, focuses on treating retinal, macular and ocular gel problems. Since 2016, she’s been researching whether medicated drops can help close macular holes, a common vision problem in people over the age of 60. Our maculas provide us with the sharp central vision we need to see read, drive and see fine details. Even a small unraveling in this light-sensing tissue can cause distorted and blurred central vision.

Traditionally, treatment for macular holes has involved a vitrectomy, an invasive eye surgery in which the transparent gel from the middle of the eye is removed; the eye is then filled with a gas bubble. It’s a fairly straightforward operation, but it still carries risk.

Afterwards, patients must maintain a face-down position for several days and nights while the gas bubble inserted at the end of their surgery floats to the back of their eye. Much like a temporary bandage, that bubble helps the edges of the hole approach each other and eventually close. Even then, a small percentage of patients have holes that can’t be successfully closed—and for some, the holes may reopen later or develop other complications, such as a cataract, retinal detachment, scar tissue or peripheral vision loss.

Three years ago, Skondra began working with Ron Gentile, MD, from the New York Eye and Ear Infirmary of Mount Sinai to see if a three-drug regimen of prednisolone, ketorolac and brinzolamide would help dehydrate patients’ retinas, decrease their swelling and allow the edges of their macular holes to creep back together.

Since then, the team has drafted a retrospective case series study of 18 patients whose holes successfully closed during the medicated drops regimen. They hope to publish the study by year’s end.

“We believe the treatment works by reducing the swelling around the hole,” Skondra said, theorizing that when the rim of the hole flattens, the edges come closer together and eventually close.

Skondra says the treatment is most effective on patients who have already had retinal surgery and whose holes are under 200 micrometers. The average size of the holes that closed was 185 micrometers—about 0.007th of an inch. The bigger the hole, and the more that scar tissue or gel pulls on the edges of the hole, the less effective the drops seem to be. For those patients, Skondra usually recommends the traditional surgery.

“If the hole is much bigger than roughly 250 to 300 micrometers, even the swelling going away from the drops isn’t going to change the gap,” she said.

The three medications being studied are already FDA-approved and routinely used for other eye conditions. Patients are weaned off the drops once the holes have closed; for those whose holes didn’t close, surgery was successful.

Sheila Lavizzo, a retired special education teacher in Calumet Heights, had a macular hole in her left eye. Her blurry vision meant her husband had to drive her when going out. Lavizzo first had surgery for the hole, but it reopened about a year later. Skondra started her on the drop regimen; the hole closed without needing more surgery, and her vision improved.

“I can see and I can drive now,” said Lavizzo, though she does have to wear sunglasses on sunny days.

“I’m glad we could help a patient remotely,” Skondra said. “In this patient’s case, it was life changing.”

Skondra hopes to begin a multi-center randomized trial in the future to further study the treatment’s effectiveness. She says it’s possible that some holes would have closed on their own without being treated with the drops. But two of the patients had their holes reappear after stopping the drops, only to have them close again when they re-started the drops regimen.