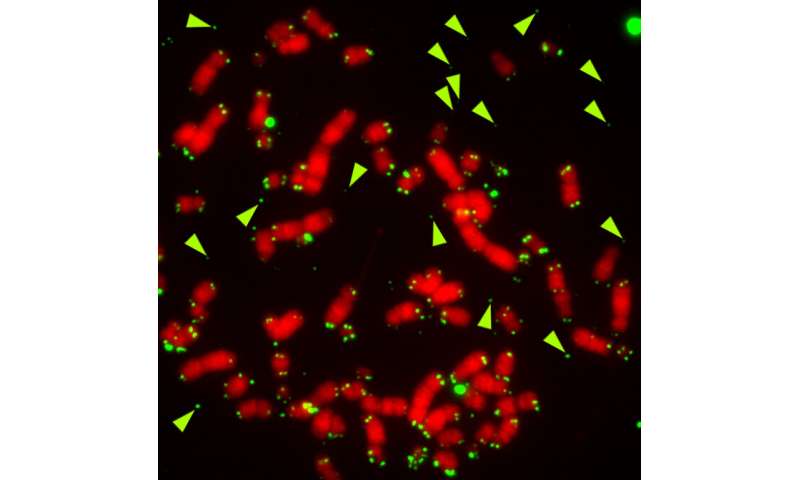 Embedded at the ends of chromosomes are structures called telomeres, which in normal cells become shorter as cells divide. Progressive shortening triggers cell proliferation arrest or death. Cancer cells adopt different strategies to overcome this control mechanism that keeps track of the number of times that a cell has divided. One of these strategies is the alternative lengthening of telomeres (ALT) pathway, which guarantees unlimited proliferation capability.

Now, a research group led by Claus M. Azzalin at Instituto de Medicina Molecular João Lobo Antunes (iMM; Portugal) has discovered that a human enzyme named FANCM (Fanconi anemia, complementation group M) is required for the survival of ALT tumor cells. The results are published in the open access journal Nature Communications. Future strategies targeting the activity of this molecule in ALT tumor cells could constitute the basis of a novel therapeutic protocol for the treatment of these tumors.

ALT tumors comprise approximately 10 percent of human tumors, and often develop in children (for example, in juvenile osteosarcoma) and they are particularly resistant to conventional chemotherapy. “Contrary to the canonical telomere elongation mechanism that activates the enzyme telomerase, these tumor cells specifically use this alternative pathway, which is insensitive to therapeutic approaches based on telomerase inhibition,” explains Claus M. Azzalin, group leader at iMM.

“Previous studies have shown that a sustained physiological telomere damage must be maintained in these cells to promote telomere elongation. This scenario implies that telomeric damage levels be maintained within a specific threshold that is high enough to trigger telomere elongation, yet not too high to induce cell death,” says Bruno Silva, first author of the study.

Using a series of experiments based on molecular biology, cell biology and biochemistry, the research team found an essential role for FANCM, a component of the DNA damage repair machinery. “What we have found is that ALT cells require the activity of the FANCM in order to prevent telomere instability and consequent cell death,” says Bruno Silva. “When we remove FANCM from ALT tumor cells, telomeres become heavily damaged and cells stop dividing and die very quickly. This is not observed in tumor cells that express telomerase activity or in healthy cells, meaning that is a specific feature of ATL tumor cells,” explains Claus M. Azzalin.