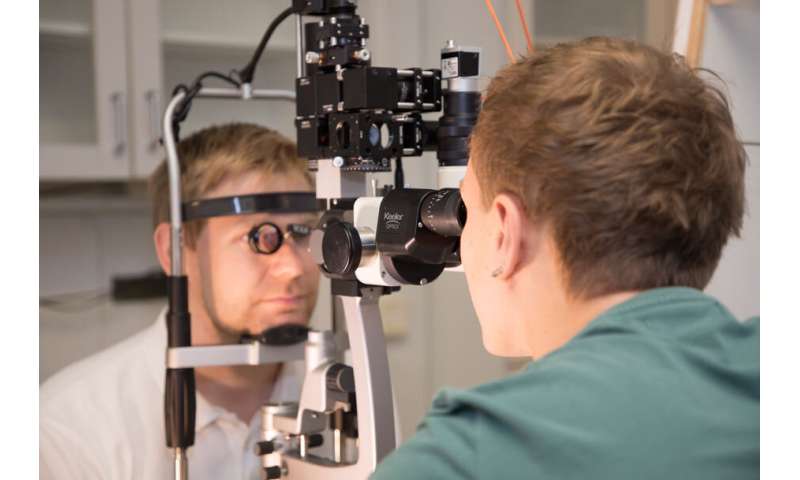 There are 200 million people in the world living with age-related macular degeneration (AMD), and in approximately a fifth of these cases, the disease progresses to an advanced stage, leading to visual impairment. Advanced AMD is divided into wet and dry forms. While wet AMD can be treated with medical injections, approximately four fifths of advanced AMD cases are of the dry form, for which there is currently no medical treatment.

Professor Ari Koskelainen explains, “The causes of AMD include oxidative stress and the resulting protein misfolding and aggregation, so we are developing a heat treatment for the back of the eye, which strengthens the defence mechanisms of retinal cells. These mechanisms help proteins refold back into their correct forms, and at the same time stimulate the natural healing process.”

The new Maculaser heat treatment developed by Aalto University researchers involves heating the retinal pigment epithelium at the back of the eye (at the fundus) with a near-infrared laser and precise temperature control. The objective is to halt the development of the condition in its early stages and to prevent it from progressing to the dry or wet form.

“Heat treatment of the fundus is not a new invention, but until now, it has not been possible to monitor the temperature of the retinal pigment epithelium while the treatment is administered. This is essential in order to avoid damage to the tissues being treated,” explains researcher Teemu Turunen.

In the Maculaser heat treatment, the temperature elevation of the fundus is determined from the acceleration of electrical signalling of retinal nerve cells in response to light stimuli and the signals can be registered in real-time from the surface of the eye using electroretinography. With this method, the voltage change caused by light flashes is measured using electrodes placed on the surface of the eye and the skin near the eye.

Testing of the new treatment device will begin next year

The temperature determination method has been shown to work in tissue research on mice and pigs, and preclinical tests for the heat treatment have begun. The goal of the Maculaser commercialisation project is to enable the use of heat treatment in humans, and the design and construction of the treatment device is currently under way.

The objective is to enable the heat treatment to be carried out within a temperature range, which is both effective and safe. The target temperature is estimated to be approximately 42-43 degrees celcius. At this temperature, the treatment has a therapeutic effect without causing damage.

“The treatment consists of heating the fundus by directing a near-infrared laser through the pupil utilising a slit lamp biomicroscope. The treatments, which are given every few months, usually last for a minute and can take care of the entire target area in one go,” Turunen adds.

The goal is that ophthalmologists would get to try out the new treatment device in 2020.

Solutions for treating AMD are being sought around the world using methods such as laser treatments, medicines, stem cell and gene therapies, and dietary supplements. A plant-based diet, giving up smoking, and taking vitamin supplements all help to hinder the development of AMD, but are not sufficient on their own. The condition develops gradually with age, and it is estimated that the worldwide direct healthcare system cost of treating the disease is over €200 billion.

“An effective heat therapy would generate huge healthcare savings. The size of the market for medicines used to treat wet AMD alone is currently around €10 billion, and it is growing rapidly,” explains Jani Tirronen, who is in charge of project commercialisation.