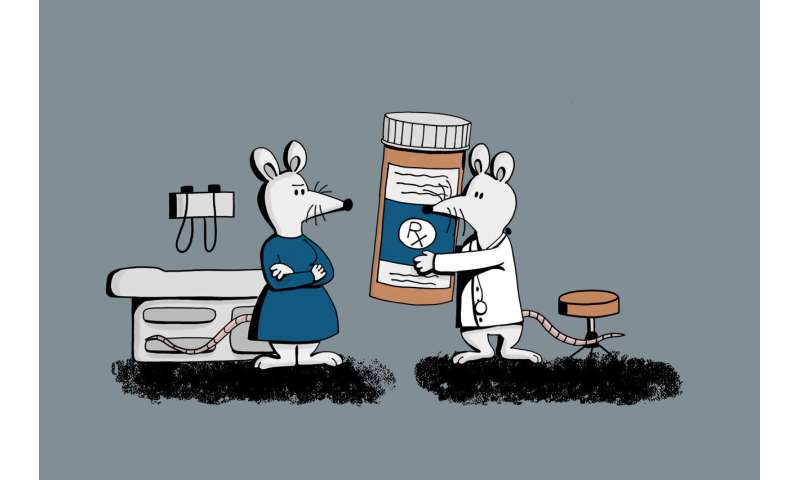 According to 60 years of scientific research, when rats are scared, they freeze. Or at least, the male rats do.

Rebecca Shansky, a neuroscience researcher at Northeastern, was studying how rats handle stressful experiences when one of her graduate students noticed the female rats responding differently. Male rats almost always held perfectly still, but some female rats would dart around the cage, looking for a way out. They were handling their fear differently.

“This is why you have to study females,” says Shansky, who is an associate professor of psychology. “They’re going to do different things. Their brains work differently.”

Rodents and other animals are often used in research as models for humans. Understanding how different sexes of mice react to a medication, for example, can help researchers predict adverse side effects in men and women. But most biomedical research has been done on exclusively male animals.

“It’s really important that we that we understand how things work in both sexes,” says Shansky, who was recently invited to write an article for Science on the subject. “If you only understand the mechanisms in males, and then you want to translate that work to help, say, people with PTSD, people with Alzheimer’s, people with Parkinson’s, your drugs might not work in women. That’s a public health problem.”

Stress-related illnesses such as post-traumatic stress disorder and major depressive disorder occur twice as frequently in women as they do in men. But for many years, researchers failed to include female animals in their studies out of fear that their changing hormones would muddy the data, Shanksy says.

Female mice go through an estrous cycle, which is like a faster version of the human menstrual cycle. Their hormone concentrations change in a four-to-five day schedule. If female mice are at different points in their estrous cycle, researchers have argued, their responses will vary too much to be of use to scientists.

But male hormones vary too, Shansky says. When male mice are kept in groups, as is often the case, they establish a dominance hierarchy. The average dominant male mouse has five times more testosterone circulating through its body than subordinate males. This is about the same variation found in female mice through their estrous cycles. Recent analyses have shown that data from female mice doesn’t vary any more than data from male mice.

“It’s not that hormones aren’t important,” Shansky says. “But they are not specifically important for women, or for female rodents.”

In 2016, the National Institutes of Health issued a mandate that new grant proposals either incorporate animals of both sexes, or demonstrate a good reason not to. But old perceptions of female mice as essentially deviant versions of male mice are still coloring how some studies are structured, Shansky says. Researchers have proposed tracking the individual estrous cycle of every mouse in a study, or removing the ovaries altogether so that hormones are no longer a factor in females, without taking similar measures to compensate for changes in males.

“It seems crazy to say that you’re sexist against female mice,” Shansky says. “But the reality is that if you’re using these animals as a model for human neural processes, then the idea that hormones are so important for females, but males are just this blank slate, the default way that the brain is, that’s sexist.”

Other researchers have suggested conducting a study on males first, then repeating the study with females to see if the results are different, says Shansky. But that still perpetuates the idea that males are the standard, and females are more complicated, she argues.

Instead, she proposes that researchers use equal numbers of male and female animals in their studies and then examine the data for potential sex-related differences. If there are any, researchers can conduct follow-up studies looking at differences in both dominance hierarchies in males and estrous cycles in females.