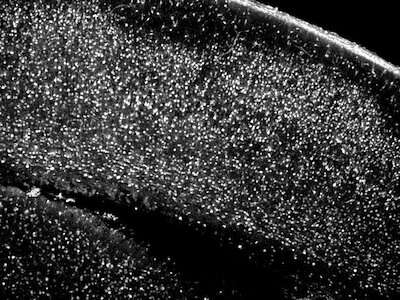 For the first time, a team of neuroscientists from Columbia University have controlled a visual behavior of a mouse by activating a few neurons in its visual cortex.

In their study, published in Cell, the researchers demonstrated that specific groups of neurons, known as neuronal ensembles, have a causal role in behavior. The researchers used new optical and analytical tools to identify cortical ensembles in mice while they performed a visual task. They also used high-resolution optogenetics to simultaneously target selected neurons with single-cell precision, taking control of the mice’s behavior. While the precise activation of neurons related to the task improved the performance of the animal, the activation of other neurons, not related to the task, degraded the behavior.

“This is the most exciting work to come out of my laboratory in decades since we are proving that cortical ensembles are key for behavior and that we can play the piano with them and alter at will the behavioral performance of animals,” said Rafael Yuste, the senior author of the study and professor of Biological Sciences at Columbia. “The data indicates, moreover, that neuronal ensembles are internal representations of a visual stimulus,” added Yuste, who is also a member of the Data Science Institute at Columbia.

The research may have significant applications in medicine. Identifying physiologically relevant neuronal ensembles with single-cell precision could be used to reorganize the patterns of activity between targeted neurons and to reprogram faulty neural circuits. And reorganizing those neuronal patterns has the potential to treat pathological conditions caused by abnormal activity patterns in mental and neurological diseases such as Alzheimer’s, Parkinson’s disease or schizophrenia, said Luis Carrillo-Reid, a former researcher in the Yuste Lab and lead author of the paper, “Controlling Visually Guided Behavior by Holographic Recalling of Cortical Ensembles.”

“We are still far from using these methods as treatments for patients,” said Carrillo-Reid, “but this study could represent a road map toward precisely reprogramming the brain, bringing neuroscience a step closer to the clinic.”

The researchers injected mice with viruses, which allowed them to observe the neuronal activity patterns in their brains. They were also able to precisely manipulate the activity of their neurons with light. Next, they attached the mice to a two-photon microscope and observed them while they ran on small treadmills. For two weeks, the researchers trained the mice to associate a visual stimulus—drifting vertical bars presented to them on a video screen—with water so that whenever the vertical bars appeared they would lick at a water spout. After the mice learned to associate the visual stimulus with licking, the researchers identified the group of neurons in the mice that responded to the vertical bars, and reactivated those neurons using a two-photon laser. This reactivation helped the mice to lick correctly more times than expected and even evoked licking in the absence of any visual stimuli, as if the mice were seeing the vertical bars as a hallucination. The researchers even triggered the licking behavior by stimulation only two neurons, as long as they were the specific group of neurons associated with the behavior.

Electrical stimulation of different areas of the brain has been used for decades to ameliorate symptoms of movement disorders such as Parkinson’s, and more recently, to treat neuropsychiatric disorders as depression. This technique, known as Deep Brain Stimulation, is used to help tens of thousands of patients every year. The technique, however, involves the manipulation of a large volume of neurons whose spatial location and identity are unknown. In this study, the researchers showed the proof of principle that identifying and targeting very specific neurons can change a behavior, opening a pathway to using this technique to help correct the problems of brain diseases,” said Carrillo-Reid, who now directs a laboratory at the National Autonomous University of Mexico.