Hyperopia is also known as far-sightedness and it is an ophthalmological condition, a disorder of refraction, which presents as blurring of near vision, but clear far vision. Hyperopic individuals typically have problems with tasks that require near vision, such as reading a book or threading a needle.

While nearly all babies are born hyperopic, this tends to self-correct during the first 5 years of life.

As many as 1 in every 10 adults may be hyperopic. An important aspect of hyperopia is that for some people, they may be asymptomatic, especially when young, while for others, blurry vision may occur for both near and far vision. 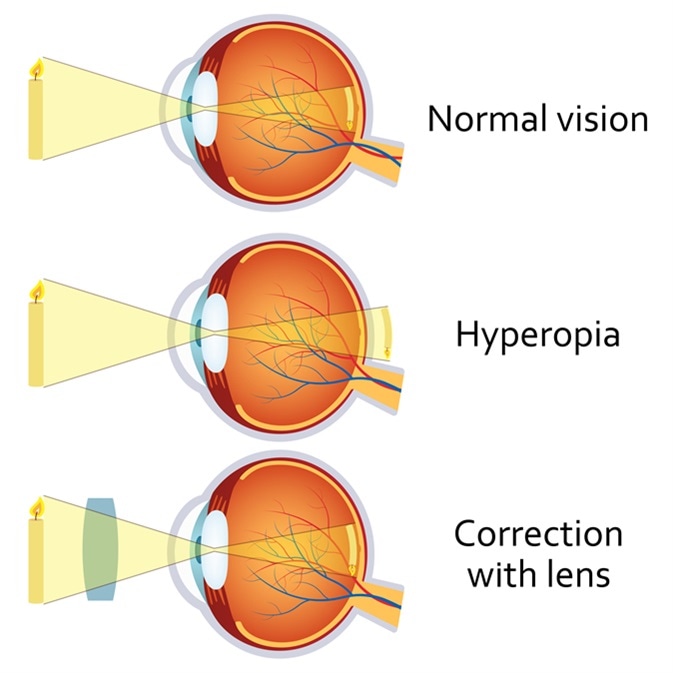 The bending of light as it passes through the cornea and lens is called refraction, and it is a necessary component of vision. Most of the refraction occurs in the cornea, which is the clear frontal surface of our eyes. The remainder is mainly at the lens, but the tear film as well as the aqueous humor and vitreous also have refractive properties.

Once light is bent at these points in our eyes, it is directed towards the retina, which is responsible for sending visual information via the optic nerve to our brains. The brain ultimately interprets the ‘light’ or visual information into the images that we see.

Errors of refraction arise when light is not directed properly onto the retina. These can be due to several factors, such as a decline in lens function as a result of aging, abnormal eyeball length, and/or changes in the shape of the corneal surface.

If the light entering the eye is focused at a point that is behind of the retina instead of directly on it, then the individual is said to be hyperopic. This would be the case, for example, if the eyeball is shorter than it normally should be, allowing the light rays to overshoot the retina and come to a focus behind it.

The majority of babies who are born at term are hyperopic to a mild degree. However, this is not the case with those who are born prematurely or of a low birth weight; these babies tend to be myopic (i.e. short-sighted). From birth into adolescence, the prevalence of hyperopia tends to decline, while there is an increase in cases of myopia. Later on in life, as presbyopia develops (i.e. age-related problems with near vision), latent hyperopia starts to become more evident.

While gender does not seem to play a role in the distribution of hyperopia, there seems to be some ethnic differences.

Hyperopia is particularly higher in people who are of Native or African American descent, as well as among Pacific Islanders.

Dr. Damien Jonas Wilson is a medical doctor from St. Martin in the Carribean. He was awarded his Medical Degree (MD) from the University of Zagreb Teaching Hospital. His training in general medicine and surgery compliments his degree in biomolecular engineering (BASc.Eng.) from Utrecht, the Netherlands. During this degree, he completed a dissertation in the field of oncology at the Harvard Medical School/ Massachusetts General Hospital. Dr. Wilson currently works in the UK as a medical practitioner.