The antimicrobial properties of shark skin may become another incentive for the development of unique materials that protect surfaces from reproduction and damage by bacteria and microorganisms, as well as the prevention of biofouling in the industrial sector.

A new study, published in Science Direct by a group of Chinese scientists, is titled "Inhibition of Biofilm Formation by Rough Shark-Skin Textured Surfaces." In it, scientists studied the microrelief and surface characteristics of shark skin and the effect of its surface properties on bacterial infection and reproduction. 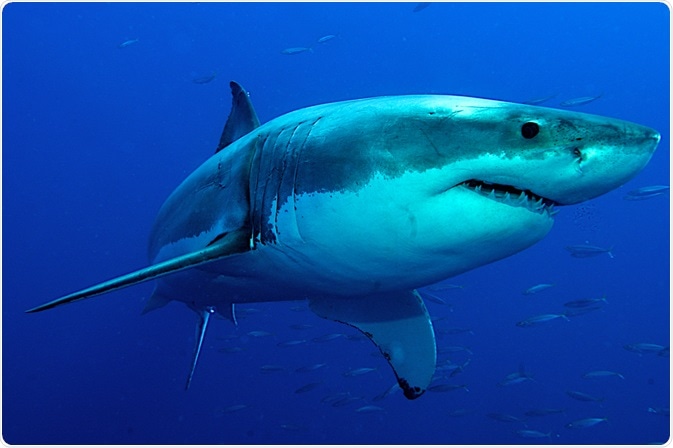 The use of shark skin in medicine

The study finds that the properties of shark skin can prevent bacteria from attaching at an early stage of infection and prevent the development of bacterial biofilms.

As a result of the action of antibiotics, the resistance of bacteria to these drugs is growing and they are becoming less effective. Patients in hospitals who are struggling with disease or have weakened immune systems are especially at risk of developing infections by just touching contaminated objects and microbial surfaces such as doorknobs, plumbing fixtures, and household appliances.

Scientists continue to develop coatings for such highly sensitive surfaces to human health to combat the growth and spread of microbes. For example, Sharklet AF technology was previously invented using the sharkskin – this is a coating that mimics the skin of a shark to reduce the ability of bacteria to attach to surfaces and inhibit their vital activity.

This new technology can effectively fight against dangerous bacteria such as E. coli and Staphylococcus aureus.

Biofouling within medicine and medical devices

In their new study, the scientists decided to look at the use of the unique qualities of shark skin to fight microorganisms in a wider range of issues. One of these issues was the effect of surface relief, as the skin structure of a shark, on biofouling in the medical industry.

You may have heard of biofouling in relation to its effect on submerged surfaces such as hulls, propellers, anchors, and fishing gear, resulting in unwanted drag, corrosion, and increased fuel consumption.

But besides this, biological fouling is a serious problem for various industries outside the marine world, including medicine, environmental biotechnology, and industrial areas.

For example, biofouling occurs in medical devices and on products such as catheters, implants, and biosensors, which can lead to the spread of infectious diseases, the rejection of artificial tissues by the human body, and disruptions in the mechanisms that maintain a stable state of the human body.

How can shark skin tackle biological fouling in medicine

Medical devices play a vital role in the treatment of numerous diseases and are designed to replace or restore biological functions in humans explains study lead author Xu-Wen Chen of the Kaohsiung National University of Science and Technology.

The human body is endowed with the ability to distinguish its structures from those of others, and the implantation of a foreign object into our body activates a complex interaction of signals that leads to the biological encapsulation of the said implant; this reaction is known as FBR.

Biofouling of medical devices can only be effectively eliminated by removing or replacing them using costly invasive procedures. And this is not the preferred option.

Therefore, the medical community is trying to better understand the phenomenon of biofouling and find ways to reduce the bacterial adhesion properties of the surface, since the initial attachment of bacteria to the surface of the material is a key factor for activating biofouling.

Scientists and medical specialists are interested in sharkskin because from them we can develop materials that can withstand the negative effects of surface biofouling. Biomimetic engineering has used shark skin to study its anti-biofouling properties.

The shark's skin, abundantly covered with placoid scales (dermal teeth), is a rough surface of grooves and ridges that form “nanostructured bulges” that allow sharks to swim with reduced resistance and prevent microorganisms from attaching to the body.

In one of their earlier experiments, scientists borrowed this ribbed skin prong shape from a shark, calling the Sharklet AF technology, and made a model that mimics shark skin.

It turned out that Sharklet AF surfaces effectively inhibit bacterial adhesion by 90–99%, depending on the type of bacteria, and reduce biofilm formation.

But the researchers wanted to understand how the topography of the surface affects its properties, which prevent the invasion of bacteria and the formation of biofilms.

Using the technology " sharkskin" for the sterilization of medical equipment

Scientists believe that the new data will help develop a medical device for applying a special microrelief to various surfaces that simulates shark skin, which will create an unfavorable environment for the development of microorganisms.

This coating can be used as an outer layer for medical instruments, medical supplies, various products, devices, and equipment to prevent the growth and spread of pathogenic bacteria.

This, in turn, will increase the sterility in medical facilities and reduce the risk of contracting certain diseases and infections. These devices will also promote wound healing and be more effective than antibiotics.

After completing his bachelor’s degree in market research and psychology in 2019 in New Zealand and Germany, Dmitry moved to London to pursue a career within the healthcare sector to oversee research projects in science and medicine, with a focus on how innovative technologies help drive and shape this industry.