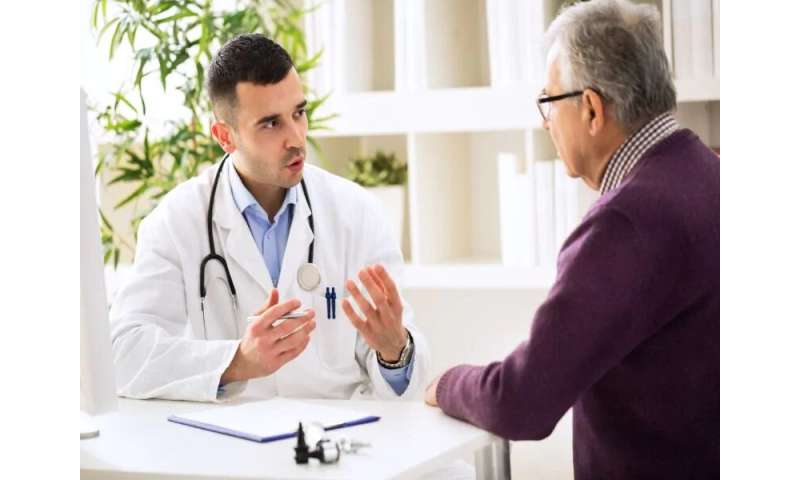 (HealthDay)—In what might be a major breakthrough, researchers report that high doses of radiation dramatically prolonged survival in men battling an advanced and aggressive form of prostate cancer.

This particular type of cancer occurs when tumors resurface and spread to a number of areas beyond the prostate among patients who were in remission following radiation, surgery or chemotherapy. Generally, the outlook for the patient at this point is grim, the researchers noted.

But in working with 54 patients, the investigators found that highly targeted “stereotactic body radiation therapy” (SBRT) can block both tumor spread and growth in most patients. Only 19% of 35 treated patients experienced disease progression in the six months after treatment. More than half remained progression-free a full year out.

By comparison, 61% of 19 untreated patients (the “observation” group) saw their cancer grow. That’s a difference that study author Dr. Ryan Phillips, a radiation oncology resident with Johns Hopkins School of Medicine in Baltimore, described as “dramatic.”

While presenting the findings Sunday at the annual meeting of the American Society for Radiation Oncology, in Chicago, Phillips also said the treatment could prove to be a game changer. It turns out that when prostate cancer patients are exposed to SBRT, the treatment appears to trigger an immune response “similar in extent to a vaccination.”

That suggests that beyond stopping the growth of existing tumors, SBRT can actually prevent new tumors from developing, he said.

Because imprecise standard radiation treatment can harm healthy tissue, “a patient with metastatic prostate cancer who does not receive the type of [SBRT] radiation we used in our study would most commonly be treated with hormone therapy,” Phillips explained. In that case, the goal is largely to control symptoms for as long as possible, offering patients an average post-diagnosis life expectancy of five to seven years.

But hormone therapy will not stop the disease in its tracks. With that aim in mind, the study team turned to SBRT.

Why? Because just a few rounds of SBRT “allows us to provide high doses very precisely while keeping the dose to normal tissues very low,” Phillips said.

That is critical, he noted, “because we know higher doses are more likely to kill all of the cancer cells in an area.”

But does all that add up to a cure? Phillips cautioned that it’s too soon to say.

All the SBRT-treated patients remain alive, he said, noting that “we did not identify any serious side effects associated with our radiation treatments.” And if prior research and the latest findings are any indication, SBRT could also be deployed as an effective treatment for other cancers, he added.

But exactly how much SBRT will ultimately improve survival “will likely require many more years of follow-up,” Phillips said.

Because the findings were presented at a meeting, they should be considered preliminary until published in a peer-reviewed journal.

“I would say that this takes us further down the path towards a cure,” said Koontz, who was not part of Phillips’ study team. “At this point, the expectation is that these patients’ cancer will recur. But this type of work is certainly a step towards us being able to cure metastatic prostate cancer,” she said.

“At least all of the signs are pointing in the right direction. So it’s very exciting, because being able to delay cancer progression means we can save other life-preserving therapies for future recurrences. And that gives us more drugs in our armament,” Koontz explained.