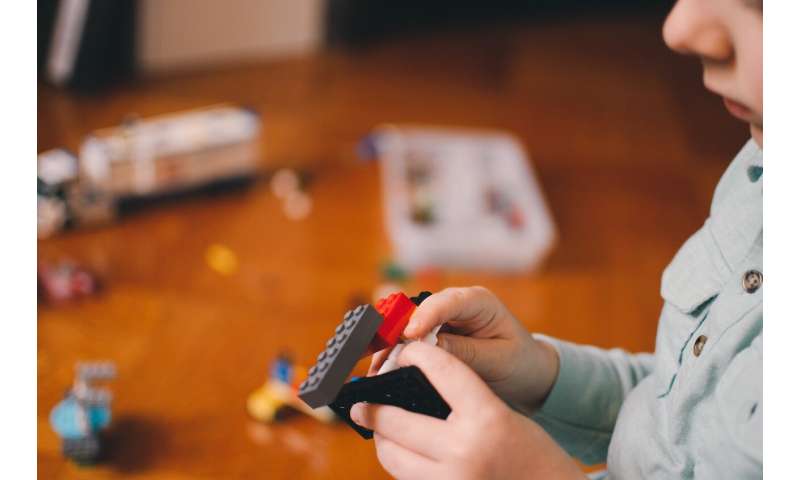 It is well-established that, on average, men outperform women on a spatial reasoning task known as mental rotation—imagining multi-dimensional objects from different points of view. Men are not, however, born with this advantage, suggests a major meta-analysis by psychologists at Emory University. Instead, males gain a slight advantage in mental-rotation performance during the first years of formal schooling, and this advantage slowly grows with age, tripling in size by the end of adolescence.

“Some researchers have argued that there is an intrinsic gender difference in spatial reasoning—that boys are naturally better at it than girls,” says lead author Jillian Lauer, who is set to graduate from Emory in May with a Ph.D. in psychology. “While our results don’t exclude any possibility that biological influences contribute to the gender gap, they suggest that other factors may be more important in driving the gender difference in spatial skills during childhood.”

Co-authors of the paper include Stella Lourenco, associate professor of psychology at Emory, whose lab specializes in the development of spatial and numerical cognition. Co-author Eukyung Yhang worked on the paper as an Emory undergraduate, funded by the university’s Institute for Quantitative Theory and Methods. Yhang graduated in 2018 and is now at Yale University School of Medicine.

The meta-analysis included 128 studies of gender differences in spatial reasoning, combining statistics on more than 30,000 children and adolescents aged three to 18 years. The authors found no gender difference in mental-rotation skills among preschoolers, but a small male advantage emerged in children between the ages of six and eight.

While differences in verbal and mathematical abilities between men and women tend to be small or non-existent, twice as many men as women are top performers in mental rotation, making it one of the largest gender differences in cognition.

Mental rotation is considered one of the hallmarks of spatial reasoning. “If you’re packing your suitcase and trying to figure out how each item can fit within that space, or you’re building furniture based on a diagram, you’re likely engaged in mental rotation, imagining how different objects can rotate to fit together,” Lauer explains.

Prior research has also shown that superior spatial skills predict success in male-dominated science, technology engineering and math (STEM) fields, and that the gender difference in spatial reasoning may contribute to the gender disparity in these STEM fields.

“We’re interested in the origins of gender differences in spatial skills because of their potential role in the gender gap we see in math and science fields,” Lauer says. “By determining when the gender difference can first be detected in childhood and how it changes with age, we may be able to develop ways to make educational systems more equitable.”

It takes most of childhood and adolescence for the gender gap in spatial skills to reach the size of the difference seen in adulthood, Lauer says. She adds that the meta-analysis did not address causes for why the gender gap for mental rotation emerges and grows.

Lauer notes that previous research has shown that parents use more spatial language when they talk to preschool sons than daughters. Studies have also found that girls report more anxiety about having to perform spatial tasks than do boys by first grade, and that children are aware of gender stereotypes about spatial intelligence during elementary school.

“Now that we’ve characterized how gender differences in spatial reasoning skills develop in children over time we can start to hone in on the reasons for those differences,” Lauer says.

Meanwhile, she adds, parents may want to be aware to encourage both their daughters and sons to play with blocks and other construction items that might help in the development of spatial reasoning skills, since evidence shows that these skills can be improved with training.

“Giving both girls and boys more opportunities to develop their spatial skills is something that parents and educators have the power to do,” Lauer says.