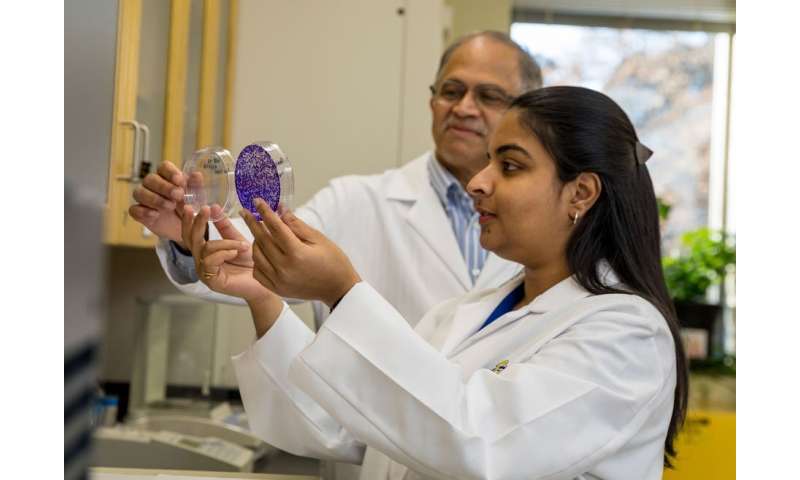 Eating fruits and vegetables is more important than ever.

Natural compounds in fruits and vegetables, known as flavonoids, can help prevent colorectal cancer. Though studies conducted during the last 20 years have established this, scientists have struggled to determine how flavonoids are responsible for cancer prevention.

South Dakota State University associate professor Jayarama Gunaje and his team in the Department of Pharmaceutical Sciences have discovered one of the mechanisms through which flavonoids prevent colorectal cancer. They found that 2,4,6-trihydroxybenzoic acid, one of the compounds produced when the body metabolizes or breaks down flavonoids, can inhibit cancer cell growth under specific conditions.

The SDSU researchers are the first to explore the cancer-inhibiting potential of 2,4,6-THBA as a metabolite produced through flavonoid degradation. Their work was published this year in Cancers.

“We have so many drugs to treat cancer, but almost none to prevent it,” Gunaje said. “Therefore, demonstrating 2,4,6-THBA as a protective agent against colorectal cancer has immense potential health benefits.”

The researchers are now identifying the bacteria responsible for degrading flavonoids. That may then lead to developing probiotics that can help prevent colorectal cancer.

The research project is funded through the SDSU Research and Scholarship Support Fund and the Department of Pharmaceutical Sciences.

While investigating how aspirin decreases colorectal cancer, Gunaje’s group documented that 2,4,6-THBA , a derivative of salicylic acid, has the ability to inhibit cancer cell growth. A search for natural sources with this cancer-preventing compound led to focusing on the polyphenolic flavonoids.

“We hypothesized that flavonoids decrease colorectal cancer due to the action of the degraded, or broken down, products rather than the parent compounds. These areas are underexplored,” Gunaje said. One of these products is 2,4,6-THBA.

“The metabolite is present in red wine in small amounts,” explained doctoral student Ranjini Sankaranarayanan, pointing to a class of flavonoids called anthocyanins, which give color to fruits, such as grapes, blueberries and blackberries.

Flavonoids are relatively stable in the acidic environment of the stomach, but degrade in the intestines, which are more alkaline, she continued. Bacteria living in the colon further degrade these compounds. “This process then exposes the gastrointestinal tract to these compounds in higher concentrations,” Gunaje said.

Sankaranarayanan confirmed 2,4,6-THBA binds to three enzymes required for cancer cell division. “This may be contributing to cancer prevention,” Gunaje said. However, when the researchers treated colon cancer cells with 2,4,6-THBA, it surprisingly had no effect.

“This proves that the transporter is required—2,4,6-THBA has the ability to inhibit cancer growth if the cell expresses an authentic transporter,” Gunaje said. “The mechanism likely targets enzymes involved in cell division thereby inhibiting cancer cell growth,” Valiveti explained.

The flavonoid metabolite can help prevent cancer in two ways, Gunaje explained. First, by slowing down the rate of proliferation, 2,4,6-THBA gives T cells and natural killer cells that police the body a greater opportunity to destroy the cancer cells. Second, when a normal cell contains damaged DNA, mutations can occur. The slowdown in cell proliferation provides time for the cells to repair their DNA, thereby preventing the accumulation of mutations.