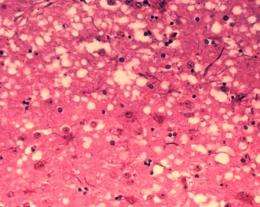 A high degree of uncertainty surrounds the issue of the prion disease risk associated with fertility drugs derived from urine, gonadotropins. Writing in the International Journal of Risk Assessment and Management, a team from Canada hopes to address this issue. At the time of writing, the transmission of prion disease via this route is entirely theoretical as there have been no reported cases of incidence.

The team points out that Creutzfeldt-Jakob disease (CJD) is a human neurodegenerative disorder that is currently incurable and invariably fatal. CJD is a prion disease transmitted by errant proteins and is closely related to bovine spongiform encephalopathy (commonly known as mad cow disease), scrapie in sheep, and a range of other diseases that affect the mammalian brain and all of which have a specific prion associated with their development. Fundamentally, prion diseases are thought to be caused by the misfolding of an otherwise benign and ubiquitous protein in cells into a distinct pathological form that essentially self-replicates by inducing the benign form to transform into the pathological conformation.