Eosinophilic gastrointestinal disorders (EGID) are disorders of the gut in which excessive numbers of eosinophils are seen in the gut mucosa on biopsies taken from one or more sites.

The condition embraces several variants such as eosinophilic esophagitis, eosinophilic enteritis, and eosinophilic gastritis. In most cases, the eosinophilia is one manifestation of a hypersensitivity reaction to antigens in some foods. 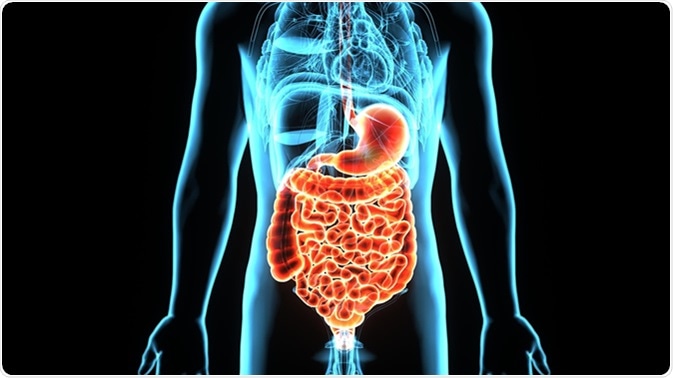 Eosinophilic gastrointestinal disorder has no specific symptom set. When it occurs as a primary condition, different forms may present with vomiting and chest pain or pain in the various parts of the abdomen, diarrhea, melena, or iron-deficiency anemia. Protein loss and failure to thrive may also occur. If the bowel wall is thickened, bowel obstruction may occur, while ascites or exudation of fluid into the peritoneal cavity occurs if subserosal eosinophilic infiltration is present, along with higher eosinophil counts in the peripheral blood as compared to other forms of the disease.

The mucosal form of eosinophilic gastrointestinal disorder is the most common type and shows up with abdominal cramps, nausea, vomiting, indigestion, diarrhea, melena, and weight loss with protein loss. The muscularis eosinophilia type is more of an obstructive condition, while the subserosal form is the rarest and presents with bloating and ascites.

A barium meal or enema may reveal changes only in the muscularis form, such as narrowing of the lumen and irregularities of the distal part of the antral stomach and proximal duodenum.

Formerly, many patients who had undergone bowel resection for intractable bowel symptoms were found to have mucosal eosinophilia. However, today endoscopy has become the first line of diagnosis and thus the diagnosis is not based upon resection specimens but on endoscopic biopsies. The most recent diagnostic criteria include the presence of gastrointestinal dysfunction with the presence of more than 15-20 eosinophils in one or more high-power fields.
Indications for a diagnostic endoscopy to rule out eosinophilic gastrointestinal disorder include:

The endoscopic features are different for different forms, with esophagitis showing strictures and furrows running longitudinally, with papules or polyps. Micronodules may occur in a more generalized form, while eosinophilic colitis is shown by irregular patches, poor vascular patterns, and hyperplasia of the lymphatic nodules.

In cases where the eosinophilic infiltration is seen only in the muscularis propria, the condition is diagnosed by a histopathologic examination of laparoscopic biopsies taken from thickened areas of the bowel wall. In a few patients, ascites develops in conjunction with eosinophilic inflammatory collections in the subserosal layer, and this type is diagnosed by finding increased numbers of eosinophils in ascitic fluid.