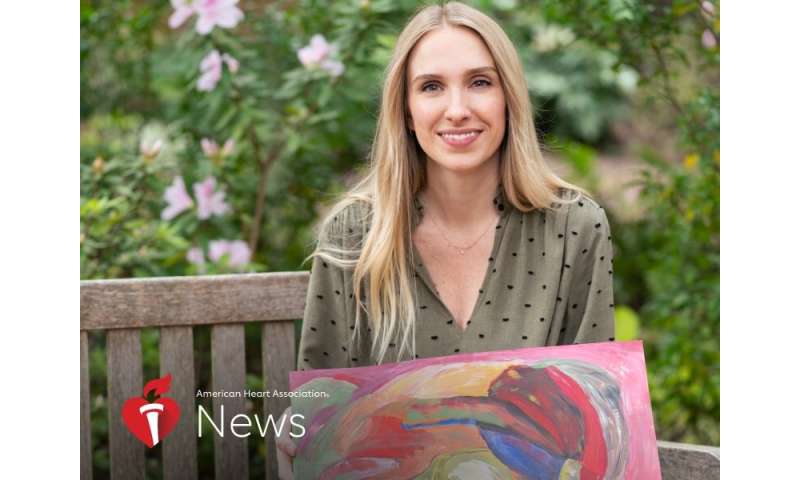 A red wagon. A blue easel. A sunny atrium. Katie Hinson remembers those snippets of her childhood stay in the hospital where she had open-heart surgery at age 5.

Most of all, the now-33-year-old remembers waking up after surgery, her father standing over her.

Even then, Hinson was a caretaker. But she also needed to be taken care of.

Hinson was born with a heart problem called an atrial septal defect. A hole separated the top two chambers of her heart. The operation repaired it. Then came recovery.

Her mother, an art teacher and artist, knew how to soothe her daughter. Let her draw and paint, her favorite activities.

Every day, nurses created a little artist’s studio in the atrium inside the Children’s Hospital at the Medical University of South Carolina in Charleston. They set her up with an easel, paper and art supplies, transporting her there in the red wagon. Hinson would draw whatever came to her young mind, letting her feelings out through color and motion.

When she grew up and went to college in Charleston, she pursued her two interests, art and psychology. She then moved to New York City and combined those two interests by earning a master’s degree in art therapy from the School of Visual Arts.

For nearly a decade, Hinson used her training to help some of the most disenfranchised populations – survivors of child abuse and trauma, people with HIV/AIDS and inmates at Rikers Island, where she was on staff for several years.

In 2018, Hinson started a job that seems tailor-made for her. She became manager of the Arts in Healing program at MUSC.

“What can be better than building an art program at this hospital?” she said. “I can recall so many feelings of being there, though it’s definitely a lot smaller than I remembered.”

Hinson, who has checkups with a cardiologist every three years, said she now feels “healthy and great.”

Her clients are hospital patients and community members, and the program includes art and music. While the people she works with now have lives vastly different than those she worked with in New York, her techniques and mission are the same. She emphasized she is a therapist, not an artist.

One group she organizes in conjunction with the American Heart Association is called Strokes for Strokes. In that workshop, stroke survivors and caretakers are invited to experience making art while also sharing stories.

“Using art in the creative process as a tool for therapy is about the most powerful thing you can have,” Hinson said. “It gets to a place much quicker than if you’re just verbally processing. There’s so much research out there that shows it helps fight depression, anxiety and isolation.”

Her goals for each person vary. For stroke survivors, she wants to foster empowerment.

“It’s incredible to see these people engage and be excited about their ability to create. More importantly, they are in a space where everybody understands. There’s no judgment. We’re just going to explore line and color with paint.”

One couple, Dan and Suzie Hankins, were regulars at the last four-month session.

Suzie had a stroke in 2000 and has aphasia, a language disorder affecting expression and understanding, as well as vision problems. Abstract painting had become a hobby for her that fully blossomed during Strokes for Strokes.

Dan hadn’t planned to join in. Once he did, he enjoyed it.

“You could put your brain on a shelf and just concentrate on what you were doing,” he said. “We also appreciated it as a deepening of Suzie’s brain muscles, to help reconnect some of those circuits.”

They enjoyed Hinson’s support and the camaraderie with other survivors and caregivers.

Quinn Gaines attended a session with her father, who was visiting from out of town. A stroke seven years earlier had left him with aphasia and limited motor skills.

“My father is usually pretty downtrodden,” Gaines said. “But you could tell that the group was a morale booster for the entire day. I think the biggest thing was the lack of judgment, and he had the freedom to go at his own pace.”

Hinson recently saw her childhood drawings, which her mother had kept from when she was in the hospital.

“At 5, you pretty much choose the colors based on what’s in front of you, but I did add a lot of color around the body,” she said. “I wish I’d had an art therapist around to help me understand why I was drawing what I did.”