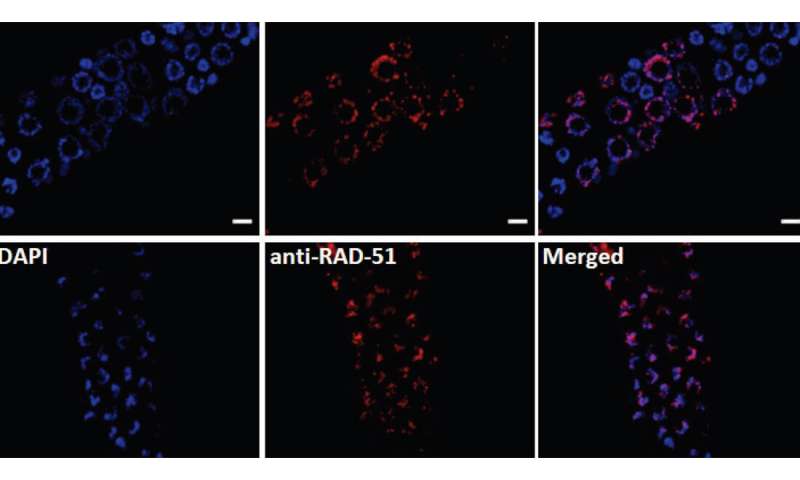 We are getting older and older, but some diseases mean that the patients age far too early and therefore live significantly shorter than the average. One of these types of diseases is Werner Syndrome. Patients with Werner Syndrome have early signs of aging, such as grey hair, wrinkled skin, increased incidence of cancer and type 2 diabetes. On average, they die at the age of 45. The underlying mechanisms of the disease are unknown, and therefore no treatment is yet available.

In a new study in the scientific journal Nature Communications, an international team of researchers from, among others, the University of Copenhagen and the National Institutes of Health in the United States, has come closer to a new way of attacking the disease. The researchers have looked at a clean-up process in the cells called mitophagy. Mitophagy breaks down defective mitochondria—the cell’s energy factories—and reuses the proteins that they are made up of.

“We are showing for the first time that Werner Syndrome is due to errors in the clean-up process. When we improve the clean-up by giving supplements of the drug NAD+, we can show in animal models that it increases lifespan and delays the aging processes,’ says Professor Vilhelm Bohr from the Center for Healthy Aging, the University of Copenhagen, and the National Institutes of Health, who had led the study.

The researchers have looked closely at the clean-up processes in blood samples from patients with Werner Syndrome, in banana flies and in roundworms with the syndrome. In addition, they have also tested NAD+ in the animal models.

“It strongly reinforces our findings that the clean-up process seems to be important in both human cells and across different animals. And then it is encouraging that in living animals, we can improve lifespan and delay the aging processes which are the key symptoms of Werner Syndrome,” says Vilhelm Bohr.

“Our results are so promising that we have received inquiries from Japan with a view to performing clinical studies of patients with Werner Syndrome. We very much hope that the studies will point in the same direction so that patients can live longer and with a higher quality of life,” says Professor Vilhelm Bohr.