Dermatofibromas are solitary tumors of the skin It is usually found over the lower legs or another extremity, and occurs most commonly in middle-aged people. Its incidence is slightly increased in females. 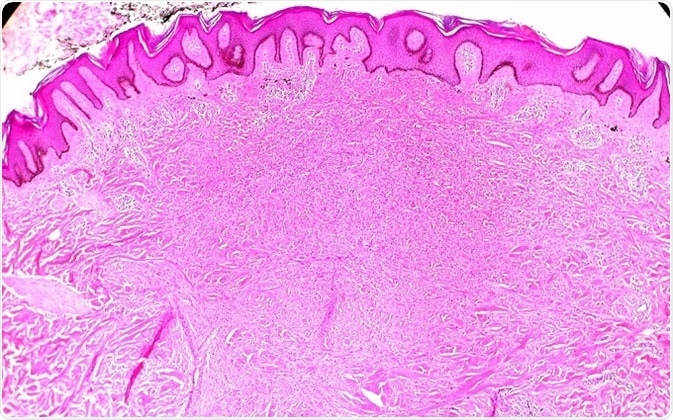 A dermatofibroma arises from oval spindle cells or histiocytes, with a slightly rough surface. It grows slowly, and is usually noticed when it is about 0.5 – 1 cm. It appears to be a darker firm nodule, plaque or papule on the skin, and this firmness is quite distinctive. They typically appear to have one shade of color, which ranges from reddish-brown or dark brown through pink to tan. They are raised above skin level in most cases, and appear hyperkeratotic or acanthotic. The tumor is non-capsulated, with ill-defined borders, and it may extend into the subcutaneous fat. These tumors are the firmest of the benign skin nodules, which is an important clinical feature.

When slight pressure is applied to pinch up the overlying skin from the sides, the skin characteristically dimples or shows a depression. This sign is called the Fitzpatrick sign, or the ‘dimpling sign,’ and is not an isolated manifestation of a dermatofibroma, because it arises from the tethering of the underlying skin to the nodule. It thus occurs whenever similar tethering is present.

Most dermatofibromas are asymptomatic, but sometimes they may be associated with itching and pain. Ulceration may occur following trauma, and the surface may become infected.

In some patients, a history of local trauma is present, typically minor, such as an insect bite. Eruptive lesions may occur in patients who have HIV, are immunosuppressed, are on HAART, or are pregnant.

Dermatofibromas are usually solitary but may occur in larger numbers. Atypical and unusual presentations may also occur in dermatofibroma. Apart from the number, the color may vary. The number may also differ, as mentioned above. When more than 15 are present, which is rare, multiple dermatofibromas are said to be present. This is usually seen in the context of autoimmune disease or other immune disorders. Some nodules or plaques may exceed 5 cm in size.

Dermoscopic examination may show any of ten patterns. The most frequently observed one is a reticular fine pigmentation at the periphery of the lesion with a central white area which appears to be a scar. However, this may vary, from having a brown to white pigmentary network. Atypical patterns include erythema, bluish-green discoloration at the center, and chrysalis appearances.

Atrophic variants of dermatofibroma may occur in approximately two percent of cases. They may be considered the ‘burnt-out’ or terminal stage of the common fibrous histiocytoma. They are typically found on the upper trunk and extremities, in middle aged women, and dimpling is characteristically present. This feature denotes dermal atrophy, which is widespread in this form of the tumor to cover more than half of the overlying skin. Elastic fibers in the dermis are largely lost at the tumor site due to phagocytosis of the elastin by the histiocytes in the dermatofibroma. Thus  the skin appears puckered inwards, and is markedly depressed over the tumor, in this variant. It may be confused with a scar, basal cell carcinoma or anetoderma.

Other variants include aneurysmal, cellular, hemosiderotic, keloidal, granular cell, and lichenoid types of dermatofibroma. Some tumors contain histological or clinical features of several of these variants. This may lead to misdiagnosis in some cases, which may cause difficulty later if the lesion is aggressive.

Aneurysmal fibrous histiocytoma appears as a bluish-brown limb nodule, sometimes growing rapidly due to hemorrhage into the tumor. The epithelioid histiocytoma is slightly more common in males, and appears to be a reddish polypoid growth on a limb, resembling a pyogenic granuloma in many cases.

A cellular histiocytoma is also more frequent in males, and may occur not only on the extremities, including the hands and the feet, though this is most common, but also on the face or the ears. It is unique in its high recurrence rate in over a fourth of patients, and may even metastasize, albeit rarely.

Lipidized histiocytoma occurs mostly on the lower extremities, the ankle being a preferred location. It appears as a yellowish cauliflower-like mass, somewhat bigger than most dermatofibromas.

Differential diagnoses may include juvenile xanthogranulomas, squamous cell carcinomas, metastatic carcinoma of the skin, or melanocytic tumors, benign and malignant, among others.