Chromosome 4 is the fourth largest of the 23 pairs of chromosomes in humans. Chromosome 4 spans about 191 million base pairs, the building blocks of DNA, which are tightly packed and supercoiled to form the DNA's helical structure. This chromosome represents around 6% to 6.5% of the DNA in the human genome and contains around 1000 to 1100 genes. 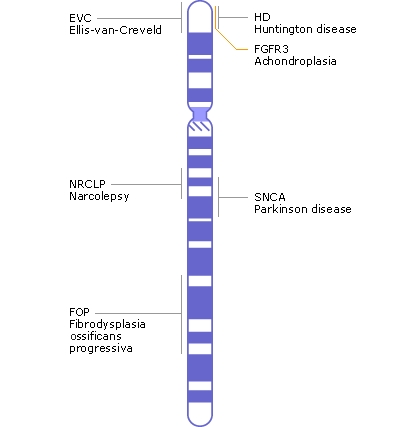 Some of the diseases and conditions linked to chromosome 4 are described below.

FSHD is primarily a muscle disorder in which muscle wasting occurs in the face, shoulder blades and upper arms. Mild versions of FSHD may not become apparent until late adolescence, whereas more severe forms can be identified in infancy.

As a result of progressive muscle wasting, weakness is usually the first symptom to be manifested clinically, usually within the muscles of the face. As a consequence, simple activities such as drinking from a straw, or smiling may become increasingly difficult.

Muscles around the eyes also become affected which may lead to the inability to close one’s eyes completely, causing an array of eye-related health issues. As the disease progresses, the shoulder blades become protruded and raising one’s arms can become difficult.

Genetic changes to the long-arm of chromosome 4 (4q) at point 35 (4q35) results in the development of FSHD. At this particular point of chromosome 4 (4q35), a region known as D4Z4; 3.3kb sequence which is normally hypermethylated, is hypomethylated in FSHD.

Wolf-Hirschhorn is a complex syndrome characterized by delayed growth; also affecting the face, intellectual disabilities, and seizures. Most people suffering from this condition have a distinct characteristic face with a broad flat nasal bridge and a high forehead.

The eyes are widely spaced and can sometimes be protruding. There is also usually a shorter distance between the nose and upper lip (short philtrum), a small chin and eyes which have small holes. There are numerous other symptoms and clinical manifestations of this disease which can affect muscle tone of the entire body, in addition to severe intellectual disability.

Wolf-Hirschhorn syndrome is caused by a deletion at the end of the short arm of chromosome 4 at point 16.3 (4p16.3). As a result of this deletion, a large area known as WHSCR-2 is deleted. WHSCR-2 contains several key genes which are involved in early development, all of which are still being characterized by researchers.

The PDGFRA gene is found on chromosome 4. Deletion of a part of chromosome 4 resulting in the fusion of PDGFRA and FIP1L1 (nearby) creates the FIP1L1-PDGFRA-fusion gene. This fusion causes the PDGFRA gene to always be constitutively active (on). This activation means that cells are continuously proliferating causing tumorigenesis.

Other cancers associated with chromosome 4 include multiple myeloma, a bone marrow cancer. Here, a translocation of a part of chromosome 4 with another part (t(4;14)(p16;q32) causes the fusion of WHSC1 with another gene on chromosome 14. This, like eosinophilic leukemia, leads to the mass cell proliferation of cells from the bone marrow.