Food allergy refers to an abnormal immune reaction to harmless proteins in food (referred to as allergens) that repeatedly occurs on exposure to the proteins and causes mild to severe symptoms, ranging from an itchy mouth through to the life-threatening allergic reaction anaphylaxis. 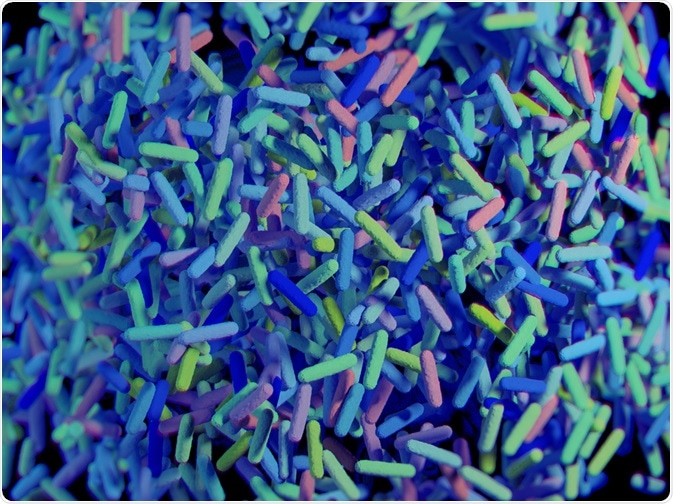 The prevalence of food allergy has increased worldwide over the last two decades, with approximately 8% of children and 5% of adults now living with an allergy worldwide.

A food allergy can be mediated by the immunoglobulin (antibody) IgE, or it may not be mediated by IgE. In America, the prevalence of IgE-mediated food allergies among children increased by 50% between 1997 and 2011. When an allergy is mediated by IgE, these antibodies target and bind to immune cells, which causes histamine to be released. This triggers an allergic reaction.

Allergies that are not mediated by IgE are triggered by different immune system pathways. Symptoms of those allergies develop more slowly, sometimes over the course of several days, and symptoms tend to be confined to the gastrointestinal tract.

How is the gut microbiota involved?

Many studies have pointed towards changes in the gut microbiota (dysbiosis) as playing an important role in the development of food allergy. Researchers have identified various factors that are responsible for the dysbiosis associated with a food allergy, including cesarean delivery, antibiotic use, lack of exposure to microbes during early childhood, and a high fat/low carb diet.

Although the prevalence of food allergy has risen significantly, treatment options are limited. Current recommendations include avoiding any foods known to induce allergy and having epinephrine ready to administer if exposure does occur. However, these approaches do not address the actual cause of the allergy.

Immunotherapy, where allergic individuals are exposed to low, increasing doses of a food trigger over time so that they can build tolerance, is a more recent approach, but it is only effective in some cases.

The association between food allergy and diet seems to begin during early childhood; researchers have found that infants who consume a diet rich in vegetables, fruit, and food cooked at home in the first year after birth are less likely to develop a food allergy than infants who eat less of these foods. Furthermore, research has shown that the average American diet, which is rich in refined carbs and low in key nutrients is associated with a greater risk of developing a food allergy.

Researchers have observed significant differences in the gut microflora of people with and without a food allergy. Healthy gut flora is made up of a wide array of commensal bacteria, including Bacteroides, Enterobacteria, Bifidobacteria, and Lactobacilli. Interaction between these bacteria and the intestinal immune system “trains” the body to tolerate food triggers.

Furthermore, taking Lactobacilli and Bifidobacterium supplements during pregnancy has been shown to prevent atopic sensitization to food allergens among infants predisposed to food allergy.

One study showed that among infants with a cow’s milk allergy, supplementation with the bacterium Lactobacillus rhamnosus helped the infants to tolerate milk protein and reversed sensitization.

Among older children with this allergy, supplementation with this bacterium increased the production of the anti-inflammatory cytokine IL-10 and relieved symptoms of allergy. According to a meta-analysis, children who took Lactobacillus and Bifidobacterium during early life were a decreased risk of atopic sensitization

Probiotics (substances that promote the proliferation of microorganisms) alleviate food allergy via several mechanisms. They increase the number of commensal gut bacteria that interact with the gut’s immune system to help it tolerate food.

They also reduce the permeability of the gut lining, reducing the uptake of antigens (molecules that bind to antibodies) in the gut lumen. In addition, they modulate the immune system in a way that means it favors an immune response that alleviates allergic symptoms.

Prebiotics are compounds that increase the action of probiotics by inducing their growth in the gut. A number of studies have demonstrated a link between prebiotic supplementation and a lower incidence of allergic conditions.

Although there is no conclusive evidence to date, some researchers suspect that eating genetically modified foods can predispose to food allergy due to the modified proteins in these foods potentially being allergenic.

Research into the immune mechanisms underlying food allergies has surged in parallel with the exponentially increasing rate of food allergy prevalence. Today, most researches agree that the body’s intestinal microbiota plays a big role in how the immune system reacts to food allergens.

Scientists have made significant progress in identifying the connections between the gut microbial composition and predisposition to food allergy.