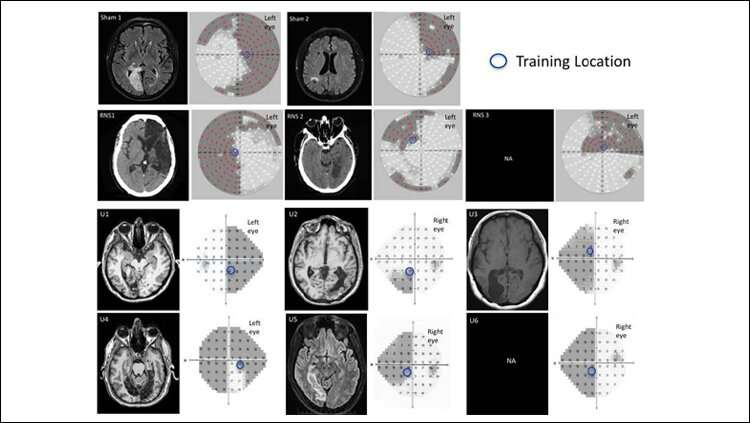 Practice results in better learning. Consider learning a musical instrument, for example: the more one practices, the better one will be able to learn to play. The same holds true for cognition and visual perception: with practice, a person can learn to see better—and this is the case for both healthy adults and patients who experience vision loss because of a traumatic brain injury or stroke.

The problem with learning, however, is that it often takes a lot of training. Finding the time can be especially difficult for patients with brain injuries who may, for instance, need to re-train their brains to learn to process visual cues.

But what if this learning process could be accelerated?

That’s what an international collaboration of researchers set out to determine. Teams members included University of Rochester researchers Duje Tadin, a professor of brain and cognitive sciences, and Krystel Huxlin, the James V. Aquavella, M.D. Professor in Ophthalmology at the University’s Flaum Eye Institute, and Lorella Battelli, group leader at the Italian Institute of Technology and assistant professor at Harvard Medical School. Motivated by emerging evidence that brain stimulation might aid learning, Tadin and Huxlin collaborated with researchers at the Italian Institute of Technology to study how different types of non-invasive brain stimulation affect visual perceptual learning and retention in both healthy individuals and those with brain damage. Their results, published in a paper in the Journal of Neuroscience, could lead to enhanced learning efficacy for both populations and improved vision recovery for cortically blind patients.

Learning is difficult and often takes a long time, Tadin says, “because after early childhood our brains become less plastic.” The brain’s ability to change and reorganize itself decreases as a person ages, so learning new tasks, or re-learning tasks after experiencing a brain injury, becomes more challenging.

To test if and how visual perceptual learning might be accelerated, researchers presented study participants with a computer-based task. Participants were shown clouds of dots and were asked to determine which way the dots moved across the computer screen. The task measured the participants’ motion integration threshold; motion perception is important in enabling people to see movement and to avoid or interact with moving objects. Participants were then asked to perform the task while sub-groups were given different types of brain stimulations, each involving a non-invasive electrical current applied over the visual cortex. The researchers found that one particular type of stimulation, called transcranial random noise stimulation (tRNS), had remarkable effects on improving participants’ motion integration thresholds when they performed the task.

“All groups of participants got better at the dot motion task with practice, but the group that also trained with tRNS improved twice as much and was able to learn the motion task better than other groups,” Tadin says.

Surprisingly, the researchers also found that when they re-tested the participants six months later, the boosts in performance were still there: the participants in the tRNS group had retained what they had learned and were still able to do better on the motion task compared to the groups that were given other stimulation techniques or training alone.

‘Something we’ve never seen in this patient population’

Tadin, Huxlin, and Battelli then extended their findings to patients who had suffered a stroke or other traumatic brain injury that affected their visual cortex, rendering them partially blind.

Huxlin had previously developed an eye-training system to assist stroke patients with recovering vision. The system includes a computer-based device that delivers a set of exercises to stimulate the undamaged portions of the visual cortical system. Through this visual training, the undamaged areas learn to process visual information that would normally be processed by the damaged parts.

Working with participants who had experienced traumatic brain injuries, the researchers coupled Huxlin’s visual training therapy and tRNS applied to both damaged and undamaged parts of the patients’ brains. These participants, too, experienced improvement in visual processing and function after only 10 days.

“This fast improvement is something we’ve never seen in this patient population,” Huxlin says.

The research offers promise for overcoming key hurdles in vision therapy for patients who have experienced a stroke or traumatic brain injury. Re-learning visual perception lost because of neurological damage typically requires months of training. Moreover, it’s unclear how long the recovered abilities are retained once the therapy has ended.

“The beauty of this combined therapy is the very short training,” Battelli says. “When you work with stroke patients you quickly realize that there is a lot of fluctuation in their ability to stay on task. Thus, training that is short and effective is a big advantage.”