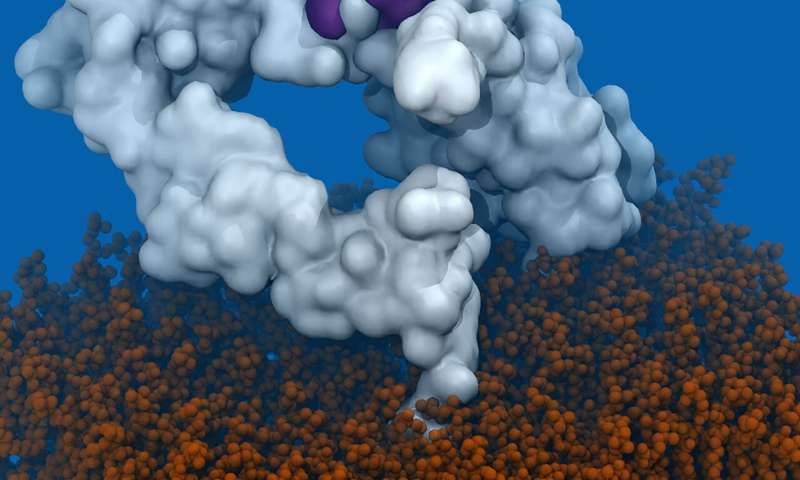 There are more than 100 mutations of the protein behind the deadly brain cancer, glioblastoma, however an international research team has discovered something these mutations have in common. The new understanding could lead to more effective treatment of different kinds of cancer.

Led by Laura Orellana, a researcher at KTH Royal Institute of Technology in Stockholm, the study sheds new light on the epidermal growth factor receptor (EGFR) gene that is associated with glioblastoma (GBM), an incurable form of brain tumor, as well as the promising success of the antibody mAb806. The antibody was developed by the Ludwig Institute for Cancer Research (LICR), to treat a large class of mutations far beyond the two approved applications to date.

Using computational simulations, Orellana found that some GBM mutations remove an inhibitory part of the protein, while others displace it, so that EGFR can function without growth signals. “They were all acquiring an intermediate shape as the protein transitions from the inactive to the active state,” she says. Surprisingly, this change in the protein’s shape exposes a region of the protein normally “buried,” which is the target for mAb806.

“In simple words, apparently different mutations achieve the same effect, activating EGFR to grow in the brain environment, and this results in exposing an Achilles heel that can be luckily blocked by mAb806,” Orellana says.

Orellana points out the similarity of these findings with the theory of convergent evolution, in which different species adapted to a common environment in similar ways, the way mammals like dolphins and whales evolved with fins similar to fish. “In the case of brain cancer, cells evolve acquiring many different EGFR mutations, but they all result in a similar type of shape that can be targeted by the same drugs,” she says.

Orellana’s research was done during her postdoc work at both KTH and Stockholm University.

The study was published in Proceedings of the National Academy of Sciences (PNAS).