Alzheimer’s disease (AD) afflicts millions of older people the world over, causing functional impairment, loss of time, reduced productivity and immense economic hardship. It also results in great mental and emotional loss to the patient, caregivers, and society at large. While millions of dollars have been put into Alzheimer’s research, the cause of this condition is still unclear.

The brain in AD shows the presence of characteristic beta-amyloid (Aβ) plaques and neurofibrillary tangles outside and inside the neurons respectively, which are always accompanied by the loss of neurons and rich synaptic connections. Many different intervention strategies have been devised using available knowledge about vascular etiology and lifestyle factors to prevent late-onset AD (LOAD), while many pharmacological interventions are aimed at preventing early-onset AD. 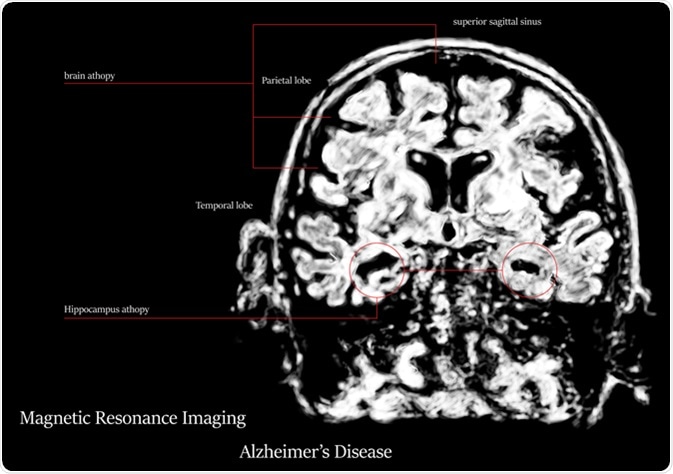 Risk factors for AD are classified as:

These are called modifiable risk factors because they can be changed by the patient, unlike genetic factors.

The chances of AD are lower in individuals who spend time with others, make new friends, have close relationships, and exercise regularly. It is also important to do things that provide social and intellectual stimulation, heighten memory skills, or encourage thinking.

Mental challenges such as learning a new game, a new language, a new skill or taking up a new activity are useful in preventing neuronal degeneration, and in fact increase the density of nerve cells and improve neuroplasticity.

Aerobic exercise increases neuronal blood flow and thus brain health, besides improving cardiovascular health. The most significant change may be in hippocampal neurons which control learning, and could be because of three changes:

Vitamin B complex is essential for normal neural metabolism, while vitamin D also improves cognition. Both of these may help prevent AD.

A glass or two of red wine yields polyphenols such as resveratrol which are also protective, but excessive alcohol consumption increases the risk of AD. Other possibly protective molecules include glucosamine, omega-3 fatty acids, and carotenoids which have potent antioxidant activity. Resveratrol is also found in peanuts, red grapes and berries and has a range of bioactive effects, including antioxidant, anti-inflammatory, cardioprotective, cancer-protective and vasodilator activity. In the brain, it has several important effects:

Phytochemicals in general may protect against cognitive degeneration, such as flavonoids, terpenoids and alkaloids. Among these, flavonoids are known to inhibit acetylcholinesterase (and so increasing the amount of the neurotransmitter acetylcholine in the brain) while enhancing memory function and reducing the release of glutamate. Luteolin is a flavonoid which is a strong antioxidant and anti-inflammatory molecule and also inhibits microglial proliferation, as well as inhibiting several metabolic signals such as intracellular calcium and STAT3.

The Mediterranean diet may be protective against AD. It has both anti-inflammatory and antioxidant effects because of the low saturated to unsaturated fatty acid ratio. These fats also enhance endothelial function and stabilize the neuronal membrane, improving brain function and preventing cognitive deterioration. The diet also puts emphasis on fish, pulses, vegetables and fruits with olive oil. Plant polyphenols such as oleuropein aglycone act in multiple ways:

An Asian-type diet is also recommended because of the increased intake of protective phytochemicals in green tea, ginger, turmeric and other spices and herbs used for flavoring. These prevent memory loss and strongly oppose the formation of Aβ aggregates.

The typical Western diet has excessive caloric content, comprising processed foods, a lot of meat, and a lot of refined sugar and saturated fat, and thus it may be a potential risk factor for dementia. Such foods produce oxidative stress and promote Aβ accumulation, thus counteracting the protective effects of herbal and vitamin supplements. Restricting caloric intake helps to slow down neuronal aging, enhance neurogenesis and neural plasticity.

Probiotics can prevent the release of proinflammatory cytokines that occurs with age-related alterations in the gut bacteria. Lactobacillus rhamnosus and L. plantarum, and Clostridium butyricum are some of the probiotics being studied for their role in preventing AD.

Vascular disease should be managed properly with treatment of hyperlipidemia and other endothelial conditions. Early-onset Alzheimer’s disease is sometimes due to the inheritance of two copies of the APOE ɛ4 gene, and in this group 60% develop AD by the age of 85 in contrast to the 10-15% seen in people without these genes. Two novel drugs are being tested, one of which attacks Aβ indirectly by stimulating the immune response against it. The other prevents the formation of Aβ from a normal protein.

Other drugs are being tested in people with a positive family history, brain Aβ deposits or a mutation associated with early-onset AD.

A multifactorial approach should be taken in the prevention of AD, combining pharmacological management with several nonpharmacological interventions. The long 10-20 year prodromal phase should be targeted for sustained preventive efforts to see significant results in AD prevention.