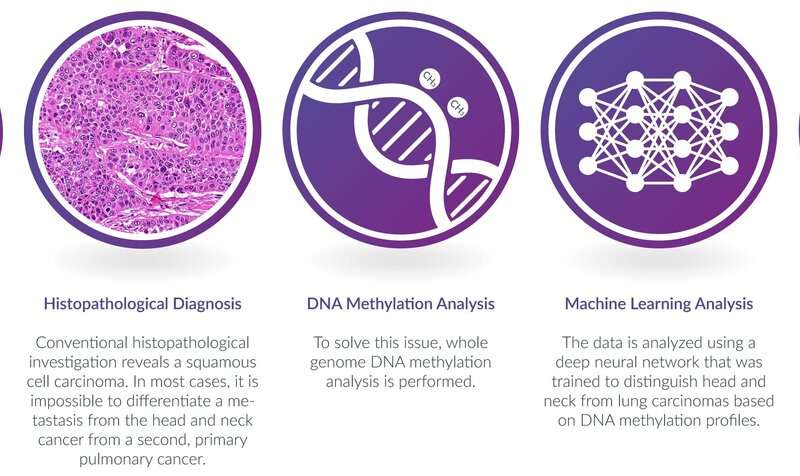 A team of researchers affiliated with a large number of institutions in Germany has tested several machine-learning algorithms to see how well they can identify the differences between lung tumors associated with head and neck cancers. In their paper published in the journal Science Translational Medicine, the group describes the algorithms and how well they worked when tested.

As the researchers note, patients who develop head and neck cancerous tumors are at risk of also developing secondary lung tumors. But sometimes, such patients also develop primary types of lung cancer tumors that are not related to their head or neck cancer. It is important that doctors treating such patients be able to differentiate the tumor types, because each requires different treatment. Also, the researchers note that one type of cancer in particular, called head and neck squamous cell carcinoma, is considered to be incurable once it spreads to other parts of the body, such as the lungs. But another type of cancer, called lung squamous cell carcinoma can often be cured with surgery. Thus, it is critical that doctors identify them as quickly and accurately as possible. Unfortunately, at this time, there is no technique to differentiate the tumor types. In this new effort, the researchers tested three neural network-based machine learning algorithms to see how well they could do the job.

Once the algorithms were ready for use, the team taught them to differentiate between tumor types by giving them biochemical sample data from 1,071 patients who had one or the other of the cancer types, and also samples from people with healthy lungs. The team reports that the best algorithm was 96.4 percent accurate in distinguishing the tumor types. They also report that in another test involving patients with a history of head and neck squamous cell carcinoma, the best algorithm proved to be approximately 98 percent accurate.