Everybody knows someone who lost a lot of weight when they started running. And plenty of people know runners who went the other way, gaining weight during training. So does running help or hurt your weight loss goals? It depends on how you do it.

How running helps you lose weight

You can lose weight just by running if your routine boosts your activity level beyond what it was before. So if you never exercise and you start running—even just around the block every day or running for 30 minutes—you’re going to burn more calories and drop some weight (unless you fall into the trap of eating extra. More on that in a minute).

To burn more by running, you need to change something up: Maybe you go longer, maybe you go faster during certain sections (try these get-faster workouts), maybe you replace some flats with some hills. Any shift (that “anything more than you did before” thing) can boost calorie burn again.

How you can lose even more weight by running

Beyond changing up your running, experts all say that if you really want to lose weight by running, you need to think about what you eat.

Sometimes that comes naturally: “often when people go from a sedentary state to moving more, they feel good about taking care of themselves and that might translate into eating better,” says Leslie Bonci, a sports dietitian for the Kansas City Chiefs and co-author of Run Your Butt Off.

“But the honeymoon phase is not forever,” she cautions. What started as a banana after a workout can spiral into a high-calorie coffee beverage and a pastry on the way home from that run.

“Too many runners overcompensate with calories after their runs, thinking that they ‘earned it,’” says Jason Karp, Ph.D., chief running officer of Run-Fit and author of Run Your Fat Off. “The thought of a big plate of pancakes with boysenberry syrup and a chocolate banana smoothie is often enough to get some runners through another few miles of a long run.” Which ends up giving you more weight to carry around on your next run (not fun). A recent studyin the American Journal of Clinical nutrition confirmed that new exercisers tend to overcompensate with calories when they work out, losing less than expected.

“People tend to forget that running isn’t a tremendous calorie burner. You burn about 100 calories a mile,” Bonci says. That’s whether you go slow or fast. (If you’re fast, you just run a lot more miles in 60 minutes than slower people do.) So if you’re mentally estimating how many calories you’re burning—and replacing—think in miles, not minutes. That 3-mile run might have been hard, and even if you crushed it much faster than usual…it’s still only 3 miles. You finished faster, but didn’t burn more (sorry).

How to avoid the running/weight gain danger zones

To prevent overeating when you’re in a running groove, you have to be smart about what you’re eating before, during and after that workout.

Before a run. “For a 45-minute run, you don’t need to have something ahead of time,” says Bonci. “A two-hour training run is different—you need to have some fuel in the tank. But if you’re only exercising for an hour, there’s no need to have anything other than water.

During the run. “People only need to fuel during long runs if they are training for a marathon or ultramarathon.” Often, people consume lots of calories from sports nutrition products during shorter runs “and then wonder why they’re not losing weight,” Karp says.

After the run. Start with a big glass of water. That helps you rehydrate and takes up “stomach share,” says Bonci, which can help you avoid inhaling everything in the kitchen at once. If you want something before you shower, think of it as an hors d’oeuvre, then shower and come back and have a meal in a more relaxed way, she says. “Think of water as the shooter and the chaser is a little bit of something to eat.”

Ideal for post-run: “I like the idea of eating something that requires a utensil, because then it at least takes a bit longer to eat,” Bonci says. “Yogurt with granola can be good, because even if you’re tired from running, most people have enough energy to lift a spoon to their mouth.”

How much weight can you lose by running?

Lots. Dustin Worth, for instance, got inspired to run when his wife completed a marathon, and he lost 20 pounds in just a month of running on a treadmill in their basement. That was when he was 270 pounds, and his running and healthy eating habits turned him into a shredded 170-pound guy now (see his whole story, with photos). 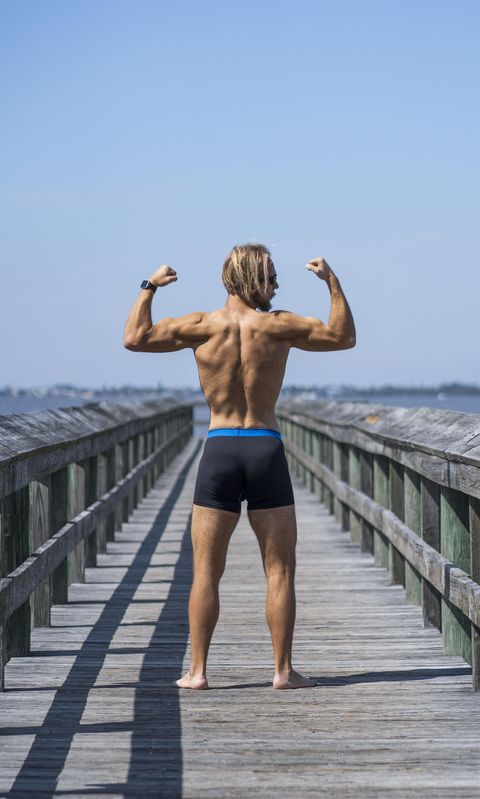 And then there’s David Myers, who, at more than 350 pounds, started walking. Then he started running, and today, he’s 130 pounds lighter. And Stephane Doiron, who grabbed his running shoes when he realized he couldn’t keep up with his son, whom he was pushing to excel in strength conditioning for his hockey team. “I remember at first, I could barely run a minute without stopping to regain my breath,” he says. Today, he regularly runs 10Ks and has dropped 55 pounds. You don’t have to run far to make running work for you. Just get out there and get after what you want from it.