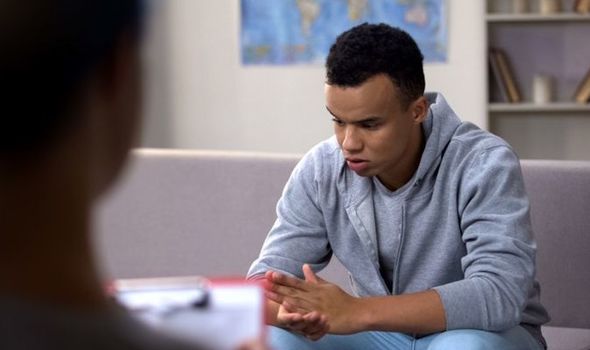 This is the new normal for Dr Fiona Smith, a GP who runs one of the pioneering “hubs” which experts hope will help solve the country’s growing mental health crisis.

But Dr Smith says investment is urgently needed because the pandemic has left so many young people at breaking point. Although she is used to dealing with troubled youngsters, she has never seen it this bad.

“They don’t sleep through the night, their hearts race, they are short of breath, having panic attacks,” she said. “So many are tearful and distressed. Some are only going to school part time, asking for online lessons. Others have dropped out altogether.

“Increasing numbers have eating disorders and I’ve never seen so many more self-harm.”

The hubs are seen as vital to relieve the pressure on Child and Adolescent Mental Health Services (CAMHS), which is having to turn down up to 50 per cent of referrals who are deemed “not bad enough” to qualify for its highly specialised help.

It is estimated 15 per cent, or 1.5 million, children in England have new or worsening mental health issues because of the pandemic and lockdown measures, and approximately 2,000 children are being referred to mental health services every day.

Before lockdown measures were imposed, one in nine children had a diagnosed mental health problem. Now it is one in six, according to NHS data. Services are at breaking point, and waiting times for CAMHS are up to a record three years in some areas.

Research carried out by YoungMinds and The Children’s Society revealed 92 per cent of GPs did not think there was good community support for children and young people with emerging mental health problems in their area through youth clubs, local charities and drop-in centres.

This paper is campaigning to ensure no child is put in danger through waiting times, and Dr Smith says hubs are key to ensuring this can happen.

Backed by leading charities including YoungMinds, and champsychiatric pioned by Dr Alex George, the country’s youth mental health tsar, Dr Smith is among a growing number of experts calling on the Government to fund a network of early support hubs in every community so those aged 11 to 25 have somewhere to go when they start to struggle or have practical problems that could damage their mental health.

There are currently around only 50 such hubs across the UK, staffed by counsellors, youth workers and mental health professionals. Creative therapy, board games, group counselling sessions and one-on-one support are among the services on offer. Staff are trained to spot problems and identify youngsters who may be at risk who they can refer to relevant services.

Footsteps, based in Stockton and run by Hartlepool and Stockton Health, is integrated into a GP system and caters for 11-19 year olds referred by schools or social workers.

Young people can self-refer and are assessed by a doctor before they access services.

Dr Smith helped set up the hub five years ago after she noticed increasing numbers of young people being “rejected” by CAMHS as they did not meet its crisis threshold for help.

“The criteria for CAMHS is not consistent across the country and it is unclear what the threshold is, but the likelihood of getting into CAMHS is very small,” she said.

“We set up Footsteps to bridge that gap in the hope of preventing children and young people needing a CAMHS referral.

She said multiple lockdowns, keeping children away from their schools, friends and hobbies, have had a “massive impact”, increasing the need for the service.

“Our referrals have more than doubled between October 2020 to October 2021 and we now have a long waiting list.

“There tends to be anxiety around going to school, especially into groups where there are large numbers of other children, like corridors or assemblies, and we’re seeing a large number self-harming and children with eating disorders. We have not. seen this level of young people with anxieties before,” she said.

“Before the lockdowns I would say non-attendance at school was rare. Often children say they are overwhelmed since going back and have the added pressure of making up for lost time academically.

“Hubs like ours offer intervention to stop problems developing into severe problems. Most of these young people need alternative interventions and services that are not available through the formal CAMHS. I’d love to see these hubs rolled out across the country.

What is happening where you live? Find out by adding your postcode or visit InYourArea

Young people area small proportion of our population but 100 per cent of our future. Our future politicians, journalists, healthcare workers. They have had a massive challenge and there couldn’t be a more important time to introduce hubs like these.

“Given the impact of lockdown on young people’S MENTAL HEALTH, early support will be vital to increasing young people’s participation in the jobs market as we recover from the pandemic.”

Kadra Abdinasir, strategic lead for the children and Young People’S MENTAL HEALTH Coalition of 240 organisations representing child mental health , said: “For too long, children and young people struggling with their mental health. have found it difficult to access timely and appropriate support .

“The delays in access to help can lead to problems escalating for many to the point of crisis.

“Emerging evidence shows the pandemic has had a profound impact on young people’S MENTAL HEALTH. Disruption to education, loneliness and isolation and bereavement are amongst some of the factors contributing to young people’s mental health worsening.

“However, it’s not too late for the Government to act to address these issues.

“Early support hubs are based in the community and provide a familiar and friendly environment which helps reduce stigma.”

Dr George, an A&E doctor at University Hospital Lewisham in London, experienced the crisis first hand when his brother Llyr, 19, who had been struggling with anxiety during lockdown, took his own life in July last year. He said: “We are in an emergency situation for people under 25. We know early intervention can prevent problems becoming lifelong.

“The waiting time (for CAMHS) is a postcode lottery and this is totally unfair. This is why I’m so keen we roll out these hubs.”