Yoga could help millions of arthritis patients: Doing the downward dog, lotus and crab ‘reduces symptoms of the agonising condition’

A study found the ancient exercise slashes inflammation and reduces pain in the joints of sufferers after just eight weeks.

And practicing downward dog, lotus and crab poses even protected the patients’ from depression – a common side effect of the chronic condition.

Yoga is thought to target the ‘mind-body communications’ that cause sufferers to experience mental-health problems, the researchers claim. 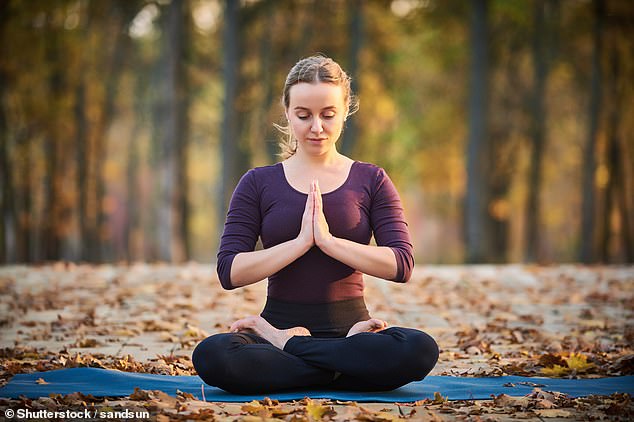 The research was carried out by the All India Institute of Medical Sciences, New Delhi, and led by Dr Rima Dada, from the department of anatomy.

RA affects around one per cent – or 400,000 people – in the UK, National Rheumatoid Arthritis Society statistics show.

And in the US, more than 1.3million adults have the condition, according to the Rheumatoid Arthritis Support Network.

RA is an autoimmune disease that occurs when a person’s immune system mistakenly attacks the lining of their healthy joints, leading to painful inflammation.

The condition has long been associated with depression, with the mental-health disorder affecting a patient’s ability to stick to their medication and worsening their disease severity.

Although past studies have found a link between yoga and improved symptoms among RA sufferers, this is the first to investigate how the ancient exercise reduces inflammation.

The researchers analysed 72 RA sufferers who were divided into two groups – those that practiced yoga while taking conventional medication and those who just took the drugs.

Blood samples were collected from all the participants before and after the experiment to look for markers of inflammation.

Disease severity was also assessed by monitoring how swollen and tender the patients’ joints were.

And yoga’s impact on the patients’ risk of depression was also measured every two weeks.

Results – published in the journal Restorative Neurology and Neuroscience – revealed the RA sufferers who did yoga had significantly lower levels of inflammation markers in their blood than those who just relied on conventional treatment.

They also reported less pain and reduced signs of depression.

By boosting their mental health, yoga made the patients more likely to take their RA medication as prescribed and helped them perform day-to-day tasks with less discomfort.

The researchers believe their study demonstrates yoga can be used as a ‘complementary therapy’ when treating RA.

‘Pharmacological treatments can be supplemented with alternative and complementary interventions like yoga to alleviate the symptoms at both physical and psychosomatic levels.’

And seeing as many diseases affect a sufferer’s mental health, the study gives hope that yoga could be used across numerous conditions, the researchers claim.

WHAT IS RHEUMATOID ARTHRITIS? THE AGONISING LONG-TERM ILLNESS THAT IS INCURABLE

Rheumatoid arthritis (RA) affects around 400,000 people in the UK

Rheumatoid arthritis (RA) affects around 400,000 people in the UK and nearly 1.3 million adults in the US.

Women are up to three times more likely to develop the condition than men. Those with family history of rheumatoid arthritis are also more vulnerable.

It is a long-term illness in which the immune system causes the body to attack itself, causing painful, swollen and stiff joints.

RA, the second most common form of arthritis that often begins between the ages of 40 and 50, tends to strike the hands, wrists and knees.

Scientists are currently unsure as to the exact cause of RA, but smoking, eating lots of red meat and coffee drinkers are at higher risk.

A cure has yet to be found, but treatments are available and proven to help slow down the progressive condition.

Patients can manage their agonising symptoms with over-the-counter drugs that combat the inflammation, such as aspirin.

But some will need replacement joints to relieve them of their pain. Exercise is recommended as it can help to look after joints.