Would you pay £80 for a perfect night’s sleep? That’s the promise of a hotel with no windows: Our insomniac checked in

As someone who has been plagued by insomnia for the past 15 years, averaging just five to six hours of broken sleep and spending most nights between 3am and 5am wide awake, I was intrigued to hear about the UK’s first ‘sleep hotel’.

This promised land, Zedwell, opened last month at a site just off Leicester Square in London. Hang on a moment, you may think — aren’t all hotels designed for sleep?

Not according to sleep expert Dr Neil Stanley, who helped design one of the first ‘ideal’ bedrooms as director of sleep research at Surrey University in the Eighties.

Dr Stanley, now an independent sleep consultant who advises Zedwell, explains: ‘Most hotels will spend more on a giant TV than on a quality mattress or soundproofing, both of which can make a huge difference to achieving a good night’s rest. 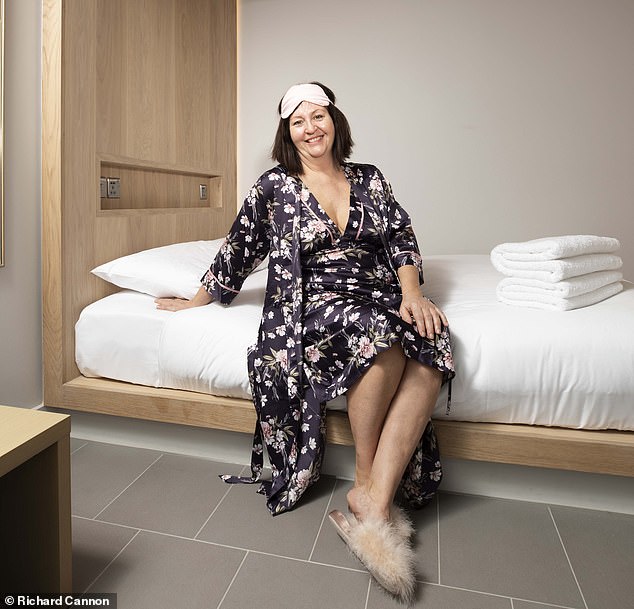 ‘Hotels have neglected the idea that people go there to sleep because they can’t get home. A fluffy topper on the bed isn’t enough. Unlike many other hotels, the prime purpose of rooms at Zedwell is sleep.’

The company claims everything is designed to encourage better sleep, from low lighting in public areas and bedrooms, to comfortable pillows and soundproofing. It sells itself to poor sleepers but studies suggest the majority who stay in hotels have trouble sleeping, with noise and light high on the list of what wakes them up.

Dr Stanley’s ideal sleeping space from the Eighties is, by his own admission, ‘like a prison cell’ — small, soundproofed with no natural light — and is more or less the model for the 700 or so sleep ‘cocoons’ at Zedwell.

But no room courtesy of HM Prison Service would have purified air pumped in — to remove allergens and dust that make some people feel bunged up and lead to snoring.

So how would a poor sleeper like me fair in one of these sleep cocoons? After the bustle of Leicester Square, I enter a calm, tranquil space bathed in soothing music and the hotel’s signature scent, made with jasmine (research at Wheeling Jesuit University in the U.S. has shown jasmine reduces anxiety and promotes sleep).

Dim lighting provides just enough illumination to ensure I can see my way around without falling over. Darkness stimulates the ‘sleep’ hormone melatonin.

There are no windows at all. The cynic in me suspects some astute business mind has seized upon a piece of less than prime real estate and managed to promote it as a sleep solution, though Zedwell says it simply found the right premises in an ideal location (but clearly the company is confident that there is money in insomnia). 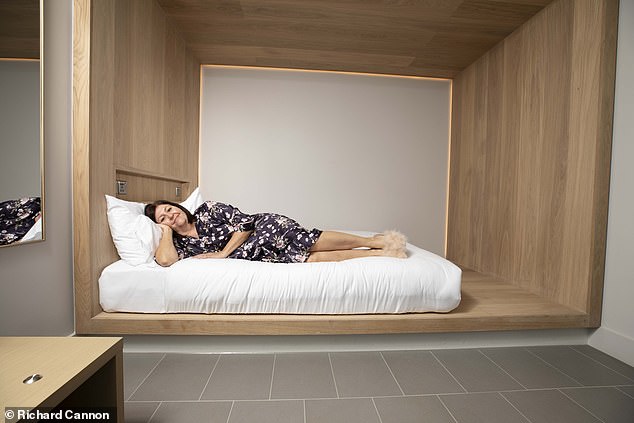 Zedwell offers guests the opportunity to sleep in rooms that are soundproofed to 60 decibels and with no natural light. Pictured: Lynne during her visit to the hotel

Working on the premise that light and sound are the biggest barriers to a good night’s sleep, Zedwell decided to shut both elements out completely. As I move from reception to my room, I use an electronic card for access without so much as a single bleep.

Rooms are soundproofed to 60 decibels — half the volume of a typical rock concert. During my stay I heard nothing from my cocoon — not other bedroom doors closing or people walking along corridors as you might expect — let alone noise from the busy West End street outside.

The room feels small at first, around a third of the size I’d expect. The double bed is against a plain wall that is dimly lit — there is no ceiling light.

There is just 3ft of space before the entrance to the shower and loo. Yet somehow I don’t feel cramped, but cosy when I get into bed. Needless to say the hotel targets single sleepers and although it expects couples, too, they may be better off booking two beds. 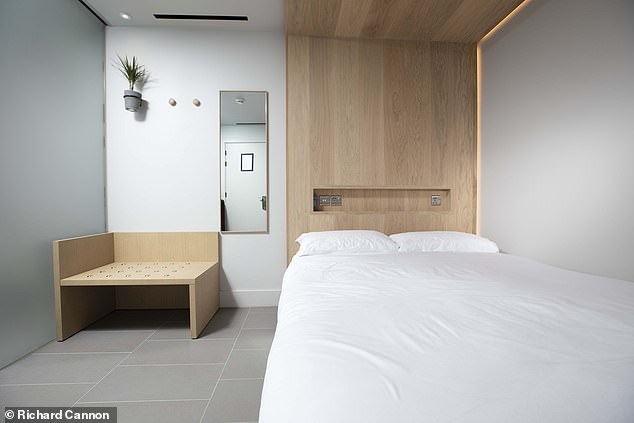 Zedwell rooms (pictured) are fitted without a TV, desk or chair as sleep experts believe a clustered room can foster poor sleep

There’s no TV, desk or chair and nothing to do but sleep. Experts at the independent Sleep Council warn that a cluttered room can foster anxiety and poor sleep.

I had a remarkably good first night, which goes against the grain for me and for most people staying away from home.

As Dr Stanley explains: ‘The “first night effect”, which was identified in the Sixties, is an inability to switch off from what the mind regards as possible threats in any new environment. Your brain is half-awake because of new noises — it doesn’t recognise the sounds of unfamiliar plumbing systems, so you’re on alert.’

Numerous studies, including one in 2016 by Brown University in the U.S., suggest noise is the primary factor in first night effect. I almost slept through from 11pm until 7am, waking once to go to the loo — the plight of the middle-aged.

But the lights are so dim that I wasn’t startled when I switched them on and I got back to sleep much faster than usual.

Oddly, my second night wasn’t as good — I woke, briefly, three times between 11 and 7 — but for me this is still better than normal and I had no need for my earplugs in, or my eyemask, both essential when I’m at home. With no natural light streaming in, I woke in total darkness and felt refreshed. 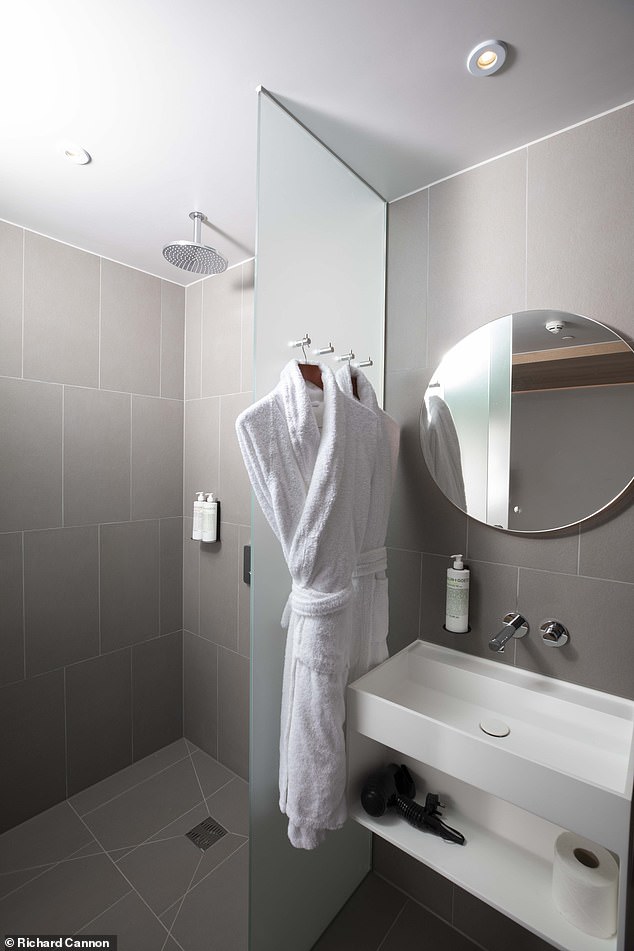 Lynne slept for almost eight hours on the second night of her stay at Zedwell. Pictured: The bathroom in Lynne’s accommodation

I slept for almost eight hours. The light when I went into the street to search for breakfast (the restaurant isn’t open yet and room service would jar with the ‘bed is for sleeping’ ethos) felt so bright I needed sunglasses . . . in February!

Professor Kevin Morgan, head of psychology and health sciences at Loughborough University, says this may help poor sleepers by offering them a break from the ‘conditioned emotional response’ to their bedrooms at home, which they associate with poor sleep.

‘The bedroom won’t be the safe, comfortable place a good sleeper will associate with sleep — it’ll be an almost fearful place,’ he says.

‘Noise will definitely disturb sleep, and the older we get the more likely this is. The likelihood for someone staying in a hotel with soundproofing and darkness is that it will mitigate that “first night effect” and they’ll sleep better because they’re not at home, where they don’t sleep well.’ 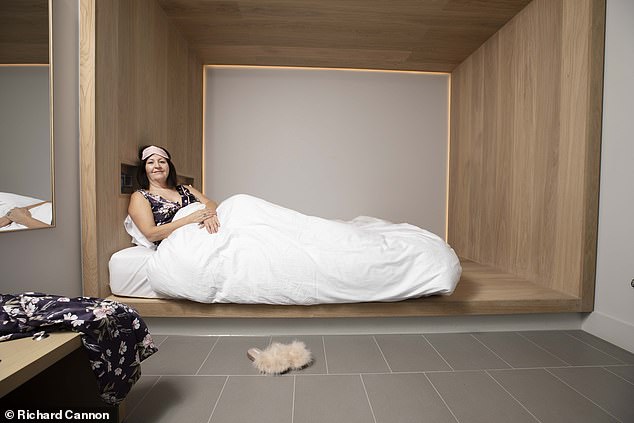 Few of us have the option of living in a hotel — and none of us would want to brick up windows — so the key question is: How much of the Zedwell experience can I take home with me?

I long ago stopped taking my phone into my bedroom, and I have no TV or radio there, in line with the advice for sound sleep I hear from sleep experts.

The Zedwell experience has made me more aware how much of a barrier noise and light can be to a good night’s sleep — and how I can block them out more effectively than I do now.

I’ve decided to invest in quality blackout blinds, and triple glazing for my bedroom window.

But one thing that won’t change is my weekend tea and toast in bed — waking up irritated by an errant toast crumb is a risk I’m still willing to take.