Scientists have 3D-printed a full system of blood vessels in a world first that puts them a significant step closer to being able to print entire, functional organs.

On an average day, 20 people die waiting for transplants amid a chronic, global organ shortage.

Scientists around the world have been exploring novel, sci-fi-esqu ways to potentially solve the organ crisis, including 3D-printing tissues.

But no one has been able to ‘print’ the complicated systems of fine blood vessels that run through organs, rendering fabricated lung or heart muscle useless.

Until now, that is.

For the first time, researchers at Rice University and their collaborators across the US have finally developed a material and printing method that lets them re-create the kinds off intricate networks of narrow tubules that make up the vascular system. 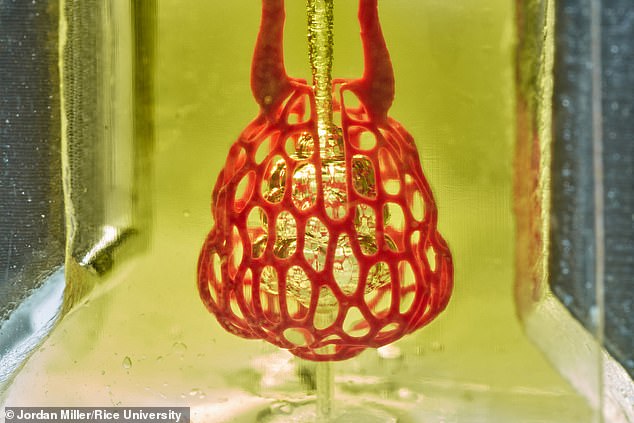 The international organ shortage is a compounding problem that leaves 113,000 people waiting, wondering if their lives will be saved, each year.

Currently, the entire transplant community relies not only on people dying, but consenting to organ donation and dying in ways that leave their organs intact and viable.

To attempt to address the shortage, health officials have loosened criteria for donor organs to expand eligibility to people who lived with well-managed HIV (to be transplanted to others living with the disease) and those that died of drug overdoses.

Scientists around the world have been working to develop more high-tech alternatives to donor organs.

Some have experimented with growing organs in the lab using stem cells, while others, like the Rice University-led team are trying to harness the power of 3D printers to create designer organs.

They’ve succeeded in printing layers of the lungs’ spongy tissues.

But the tangle webs of blood and lymph vessels that runs through each organ, interconnecting every part of the body like a liquid super highway has remained elusive.

If a transplanted organ – 3D-printed or otherwise – doesn’t have proper vasculature, or blood vessels, that connect to the rest of the body, it will be unable to receive its share of nutrients and oxygen and die.

Blood vessles and similar passageways that carry lymph, or immune, fluid pose a particularly steep design challenge because the tissues have to be tough but malleable, and hollow but narrow.

And, of course, they have to be intricately interconnected.

‘One of the biggest road blocks to generating functional tissue replacements has been our inability to print the complex vasculature that can supply nutrients to densely populated tissues,’ said Dr Jordan Miller, assistant professor of bioengineering at Rice’s Brown School of Engineering and co-leader of the study.

‘These interpenetrating networks are physically and biochemically entangled, and the architecture itself is intimately related to tissue function.’

Using a ‘hydrogel,’ the scientists were able to print incredibly fine layers of these network based on images of the desired systems, and only harden them exceptionally slowly using blue light.

Their new approach allowed them to build the complex, robust architecture in minutes, but it remained pliable and could withstand breathing.

And it worked. They tested oxygen uptake through red blood cells in their lung models, and even transplanted 3D-printed livers structures, injected with actual liver cells into mice.

It isn’t clear if the livers became functional, but the liver cells survived the implantation, suggesting the blood vessel systems were working.

‘With the addition of multivascular and intravascular structure, we’re introducing an extensive set of design freedoms for engineering living tissue,’ Dr Miller said.

‘We now have the freedom to build many of the intricate structures found in the body.

‘We envision bioprinting becoming a major component of medicine within the next two decades.’