A retired GP plagued with chest pains was driven nearly 300 miles from Cornwall to a London hospital — because her husband feared she may die in ambulance queues outside her local A&E.

Dr Alison Durkin, 61, woke up in agony last Monday and was rushed to Royal Cornwall Hospital in Truro by paramedics.

She was forced to wait outside A&E in an ambulance for six hours because there was no room for medics to hand her over.

After sitting in a queue of 30 ambulances, Dr Durkin was eventually admitted before being discharged by a junior doctor who suggested she had Covid.

She tested negative the next day but her symptoms kept getting worse. It prompted her husband Ross, 63, to research other hospitals for her to potentially be seen and cared for quicker.

All major hospitals in the South West were facing similar problems, so that Thursday they decided to travel all the way to Charing Cross Hospital in the capital — instead of calling an ambulance to take them back to their local site.

Thankfully, by the time they made the nearly five-hour journey, Dr Durkin — who had suffered heart problems for decades — only had to wait 10 minutes to be seen.

Her husband said he is not ‘sure whether she would still be here’ had they not made the trip. She is still recovering in the hospital.

The NHS is facing its worst ever summer crisis, with heart attack and stroke patients being told they may have to wait several hours before being picked up.

The health service is being battered by Covid, staff absences and excess admissions caused by the heatwave, with emergency departments the busiest they’ve ever been at this time of year. 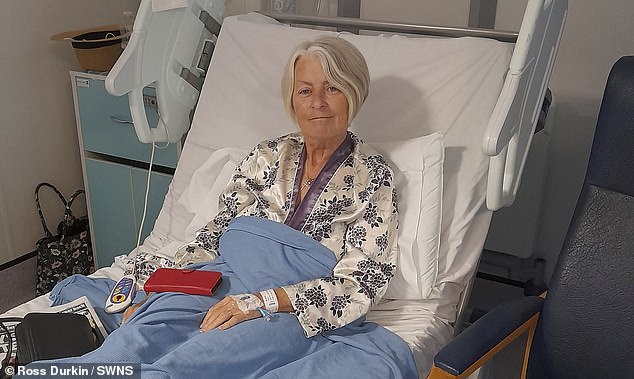 Dr Alison Durkin, 61, was driven nearly 300 miles to a London hospital to be seen for chest pains because of 30-ambulance queues outside her local A&E 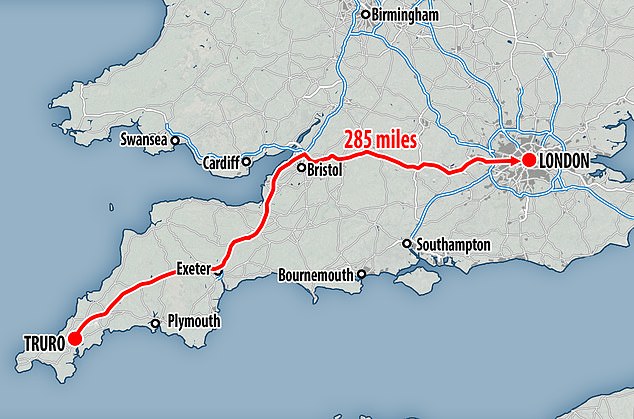 All major hospitals in the South West were facing similar problems, so last Thursday they decided to travel all the way to Charing Cross Hospital in the capital 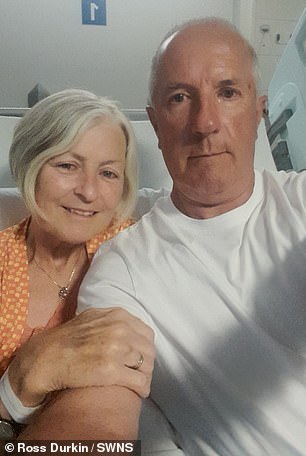 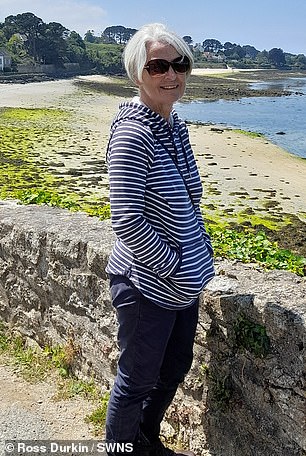 Her husband Ross (left, pictured with Dr Durkin), 63, said he is not ‘sure whether she’d still be here’ had they not made the trip

Heart attack and stroke patients who call for an ambulance are being told it could be hours before they are seen — as the NHS wrestles with its worst ever summer crisis.

West Midlands Ambulance Service has warned it was ‘under significant pressure’ and category 2 callers could be waiting ‘several hours’.

The update acknowledged call handlers may encounter ‘difficult conversations’ with people desperate for help as a result, adding that ‘support will be available’ for staff.

A BBC investigation last week shoed how ambulances are being forced park for up to 20 hours outside hospitals waiting to hand over patients.

NHS guidance says paramedics should be able to hand over patients within 15 minutes of arriving at A&E.

The NHS is being battered by Covid, staff absences and excess admissions caused by the heatwave, with emergency departments the busiest they’ve ever been at this time of year.

Mr Durkin, a retired journalist from Helston, Cornwall, said: ‘After waiting for hours on Monday, Alison couldn’t face it again so we decided to drive to London.

‘I was genuinely concerned Alison wasn’t going to make it. I thought it would be our last day together.

‘When we got to Charing Cross and saw just one ambulance outside A&E compared to the 33 outside the hospital in Cornwall, my heart soared.

‘Alison got seen within ten minutes of arriving. That’s how it should be.

‘We were fortunate that we had the time and resources to embark on the journey to London, but not everyone can do that.’

In a stark confession, he added: ‘I’m not sure whether she’d still be here to be honest, it’s not an easy thing to say.’

Dr Durkin, who retired as a GP in 1999 due a condition that causes the narrowing of blood vessels in the heart, found herself in pain last Monday and called an ambulance.

After speaking to her GP then NHS 111, she called an ambulance and was taken to her local NHS hospital.

But she was not taken to A&E and instead spent the whole afternoon and evening in the back of the ambulance she arrived in.

NHS guidelines state patient handovers from ambulance to A&E staff should last no longer than 15 minutes.

Eventually, Mr Durkin said she was seen in the evening but was discharged, with medics suggesting her issues were Covid symptoms.

She woke up on Tuesday morning testing negative for Covid but feeling worse, so Mr Durkin checked the waiting times at other hospitals in the South West.

He said: ‘We checked Plymouth, Exeter and Bristol but they were no better. Bristol Royal Infirmary told us there were 88 people in the queue for A&E.

‘The only answer was to go to and find a hospital where there wasn’t a massive queue outside and where she could actually get decent quality of care.’

They spent the following two days attempting to get in touch with a London doctor who had previously treated Dr Durkin for her condition, but they were unable to arrange an appointment.

But on Thursday they decided to travel to London anyway, in the hope of finding a hospital with less queues.

Mr Durkin said: ‘Should you ever find yourself in the position we were last Wednesday when you believe that if you do nothing the chances are that a loved one is going to die, you will probably come to the same conclusion that we did and go elsewhere.

‘Charing Cross Hospital seemed easiest to get to so we went there and, on arrival at A&E, saw only one ambulance, compared with the 33 that saw we parked up outside Treliske.’ 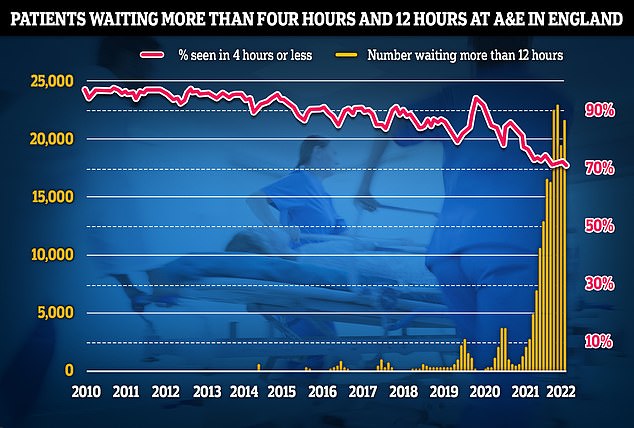 Some 22,034 people had to wait more than 12 hours in A&E departments in England in June from a decision to admit to actually being admitted, NHS England said. The figure is up from 19,053 the previous month, but still below a record of 24,138 in April, which was the highest for any calendar month in records going back to August 2010. The number waiting at least four hours from the decision to admit to admission stood at 130,109 in June, up from 122,768 the previous month. A total of 72% of patients in England were seen within four hours at A&Es last month, down from 73% in May 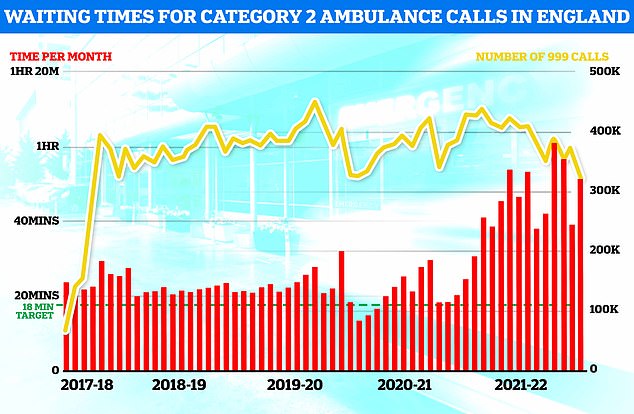 Heart attack patients waited more than 50 minutes for an ambulance on average in England last month — nearly triple the NHS target. There were more than 300,000 category two callouts in June 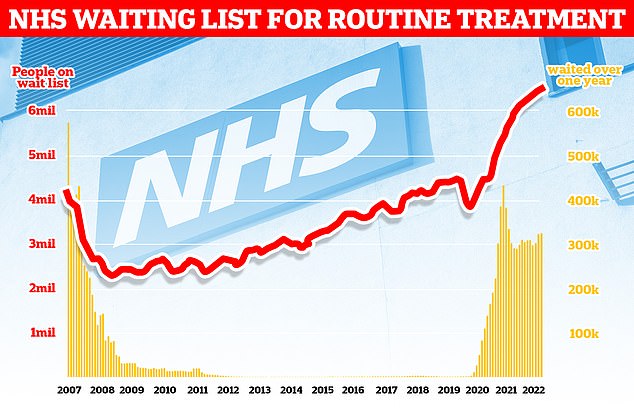 At the same time, the NHS backlog for routine treatment grew from 6.4million to 6.6million in May, the latest month with data, meaning one in eight people in England are now waiting for elective care, often in pain

Dr Durkin was immediately whisked away within minutes of arrival — and was on a bed in the A&E ward 20 minutes later, which is where she has remained since.

Mr Durkin said they were ‘truly appalled’ at the way things were handled at the hospital in Cornwall — and demands something must change.

He is in the process of writing to several local MPs to tell their story in the hope something will be done.

He said: ‘I have nothing but praise for the poor ambulance drivers and trained paramedics who are currently spending their time sitting on the back step of their vehicles, unable to attend other emergencies because they are stuck in a queue.

‘We were fortunate that we had the time and resources to embark on the journey to London that we did.

‘But I dread to think what happens to the old folk around Cornwall who can’t travel* do they just accept their fate?

‘If the situation wasn’t so preposterous it would be laughable.

‘People in positions of authority need to start banging their heads together to find a way of resolving this.’

The Royal Cornwall Hospitals NHS Trust apologised for the distress caused to Dr Durkin and her husband.

It said: ‘Our staff are working exceptionally hard in very difficult circumstances and will always make sure patients are assessed on their arrival at our emergency department and those most critically ill will be admitted right away.’

Cornwall Council, the body responsible for social care in the county, said it was ‘working closely with partners across the health and care sector to support people to leave hospital as soon as they can’.

It said recruitment in the sector continued ‘to be an issue’.