‘We never got past the first scan’: Woman who had four miscarriages in ONE year gives birth to a baby boy after pioneering treatment stops her immune system attacking the womb

A woman who suffered four miscarriages in one year has given birth to a baby boy after undergoing pioneering treatment.

Samantha Catanach, from Hessle, Yorkshire, was suffered recurrent miscarriages because her immune system attacked each pregnancy.

Every time the 32-year-old got conceived, the cells saw the fetuses as a ‘foreign body’, and ended the gestation period at seven weeks.

The killer cells, similar to those produced to fight cancer, were only discovered when the dance school teacher paid for tests at a private London clinic. 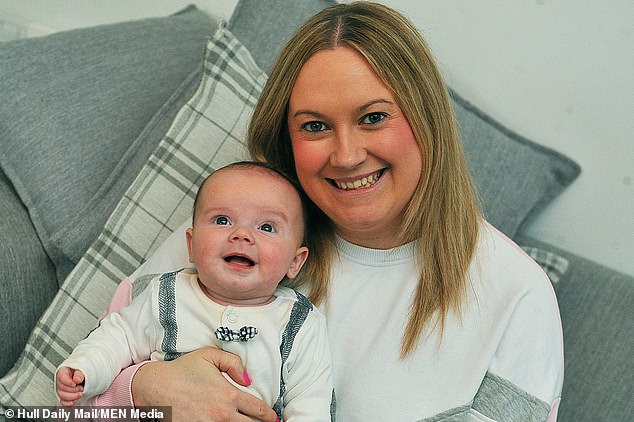 She was offered steroid treatment to suppress her immune system, and after getting pregnant for a fifth time, agreed to try it, at a cost of £7,500.

She travelled to London at four, eight, ten, 12 and 16 weeks pregnant and had steroid medication, as well as intralipid infusions through the veins in her arms.

Now, Mrs Catanach and husband Martin, 34, are proud parents of their son, Ted.

‘Once felt like bad luck,’ she said. ‘When you’ve had three, it’s classed as recurrent miscarriage. It was so difficult for us that it kept happening. We never got past the first scan.

‘We came to the end of the road with NHS testing and got told to keep trying, but emotionally and mentally, I felt I couldn’t keep putting myself through it.

‘I started researching online, reading a lot of blogs and forums and that led me to go to London for private treatment. I was told we all have these cells and they’re what we use to fight cancer and illness. But mine were very aggressive and they were killing my babies.’

The treatment is not funded on the NHS, and so the dance teacher started writing a blog called Crazy Fertility Queen, in the hope of sharing her story and reaching out to other women who had been, or were going through, similar experiences.

She said: ‘At the moment the NHS don’t treat this. I find that very hard because if you’re not fortunate to go into private health care, you probably wouldn’t have the test and wouldn’t know what the problem was.’ 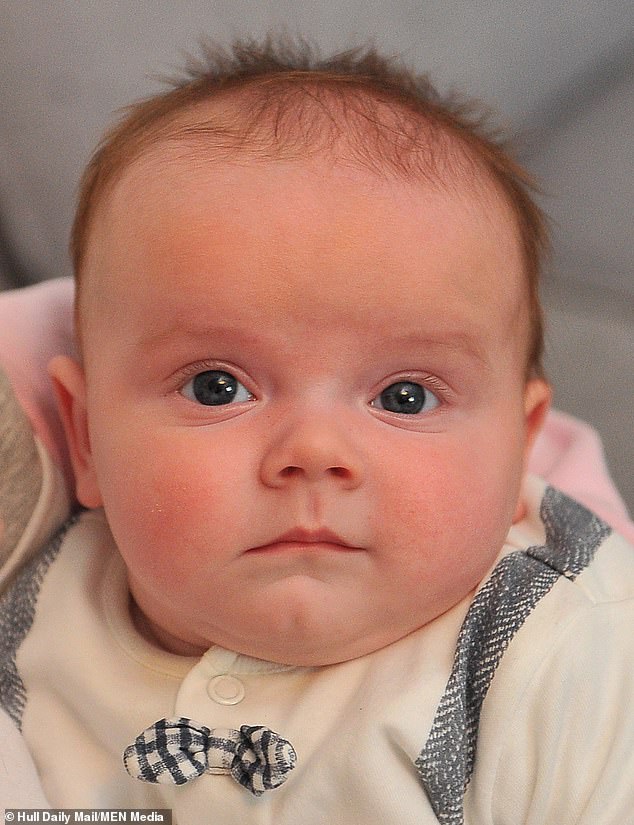 Premature: Mrs Catanach said her pregnancy was not easy and Ted was born five weeks early 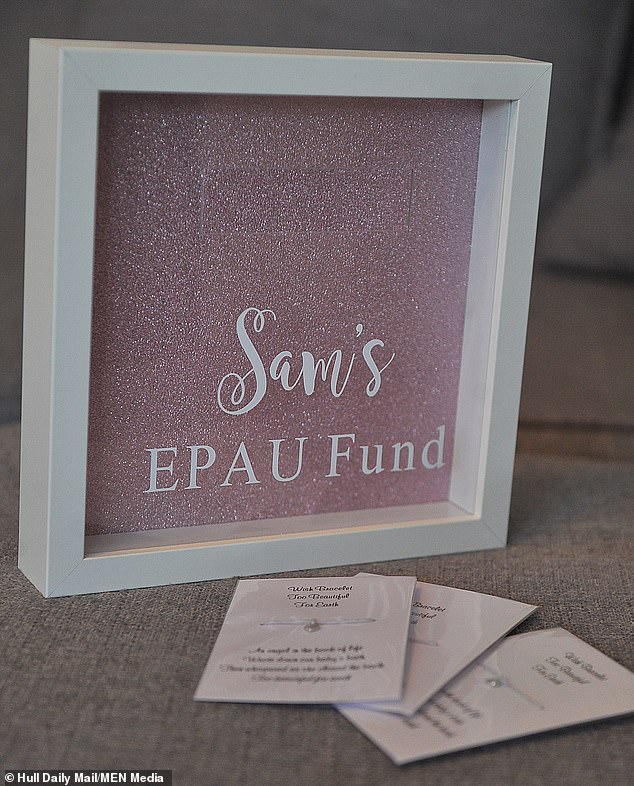 Paying it forward: Mrs Catanach is now raising money for the Early Pregnancy Unit at Hull Women and Children’s Hospital, which helped her to finally become a mother

Mrs Catanach said her pregnancy was not easy and Ted was born five weeks early.

‘I ended up having him prematurely at 35 weeks because I started having bleeds from 31 weeks onwards, and they decided it was safer for him to be out then in,’ she said.

With no beds available in Hull’s Neonatal Intensive Care Unit, Mrs Catanach was taken via ambulance to Barnsley to give birth. Ted, who was born weighing 5lbs 4oz, was transferred to Hull when he was three days old and allowed home after a week.

‘Ted is our absolute rainbow baby and we’re so lucky to have him,’ she said. ‘I love him so deeply and he will never know how wanted he was but one day

‘I will tell him this story. He is my rainbow, my pot of gold, I’m glad I put up my fight and that I listened to my instinct on so many occasions. I said I’d not go through it all again, but I absolutely would, becoming a mummy is the best thing in the world.’

The new mum, who runs Flex Dance Inc with her best friend Stephanie Keeting, is now raising money for the Early Pregnancy Assessment Unit at Hull Women and Children’s Hospital.

Thanks to the support of women following her blog, Mrs Catanach raised £1,500 and purchased 700 special rope bracelets. The bracelets will be given to women in the unit who have suffered pregnancy loss.

She said: ‘I became a familiar face because I was there so often and I can’t speak highly enough about the staff and the care I received.

‘The staff in the Early Pregnancy Assessment Unit were just so supportive and were really amazing. I wanted to do something to help other women who have early losses because, no matter how caring the staff were, I felt like I was leaving empty-handed and that I had nothing.’ 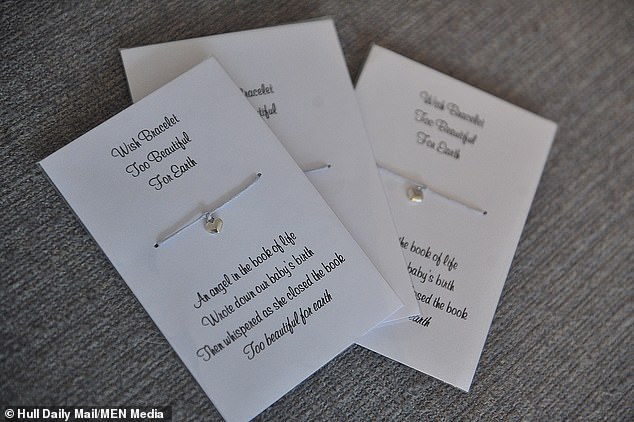 Mrs Catanach raised £1,500 and purchased 700 special rope bracelets. The bracelets will be given to women in the unit who have suffered pregnancy loss

What causes a miscarriage?

It is highly unlikely that you will ever know the actual cause of a one-off miscarriage, but most are due to the following problems:

The most common cause of miscarriages in the first couple of months is a one-off abnormal development in the fetus, often due to chromosome anomalies. ‘It’s not as though the baby is fine one minute and suddenly dies the next,’ says Professor James Walker, Professor of Obstetrics and Gynaecology at the University of Leeds.

‘These pregnancies fail from the outset and were never destined to succeed.’ Most miscarriages like this happen by eight weeks, although bleeding may not start until three or four weeks later, which is worth remembering in subsequent pregnancies. ‘If a scan at eight weeks shows a healthy heart beat, you have a 95 per cent chance of a successful pregnancy,’ says Professor Walker.

A hormonal blip could cause a sporadic miscarriage and never be a problem again. However, a small number of women who have long cycles and irregular periods may suffer recurrent miscarriages because the lining of the uterus is too thin, making implantation difficult.

‘There used to be a trend for progesterone treatment, but trials show this really doesn’t work,’ warns Professor Walker. ‘There is some evidence that injections of HCG (human chorionic gonadotrophin, a hormone released in early pregnancy) can help, but it’s not the answer for everyone.’ The treatment must be started as soon as the pregnancy is confirmed, at around four or five weeks.

Around 20 per cent of recurrent miscarriers suffer from lupus or a similar auto-immune disorder that causes blood clots to form in the developing placenta.

A simple blood test, which may need to be repeated several times, can reveal whether or not this is the problem.’One negative test does not mean that a women is okay,’ warns Mr Roy Farquharson, consultant gynaecologist who runs an early pregnancy unit at the Liverpool Women’s Hospital.

Often pregnancy can be a trigger for these disorders, so a test should be done as soon as possible,’ he adds.But it can easily be treated with low dose aspirin or heparin injections, which help to thin the blood and prevent blood clots forming – a recent trial also showed that women do equally well on either. ”We have a 70 per cent live birth rate in women treated for these disorders,’ says Dr Farquharson, ‘which is excellent.’

While uterine abnormalities, such as fibroids, can cause a miscarriage, many women have no problems carrying a pregnancy to term. An incompetent cervix can also cause miscarriage at around 20 weeks.

While this can be treated by a special stitch in the cervix, trials suggest it is not particularly successful, although it may delay labour by a few weeks.Gene and chromosomal abnormalities, which can be detected by blood tests, may also cause recurrent miscarriages in a small number of couples.

A procedure known as preimplantation genetic diagnosis can help. After in-vitro fertilisation (IVF), a single cell is taken from the developing embryo and tested for the gene defect. Only healthy embryos are then replaced in the womb.

It is an expensive and stressful procedure – and pregnancy rates tend to be quite low – but for some this is preferable to repeated miscarriages or a genetically abnormal baby.