Woman, 21, is diagnosed with a brain tumour the size of a SATSUMA after a roller coaster ‘rattled her head’ and left her suffering with a drooping face and vomiting

A woman who had no idea she was ill was diagnosed with a brain tumour after going on a roller coaster ride triggered vomiting and paralysis in her face.

Molly White, from Paignton in Devon, had a slight headache after coming off Colossus at Thorpe Park, but blamed it on the twists and turns of the ride.

But she later discovered the ride had shifted a cancerous lump the size of a satsuma hidden deep in the middle of her brain, triggering the tell-tale tumour symptoms.

After scans and closer examination doctors found the tumour had been growing for years but had stayed in an area where it had caused no symptoms.

Almost three years after her diagnosis and after two operations to try and cut the tumour out, Miss White credits the roller coaster ride with saving her life. 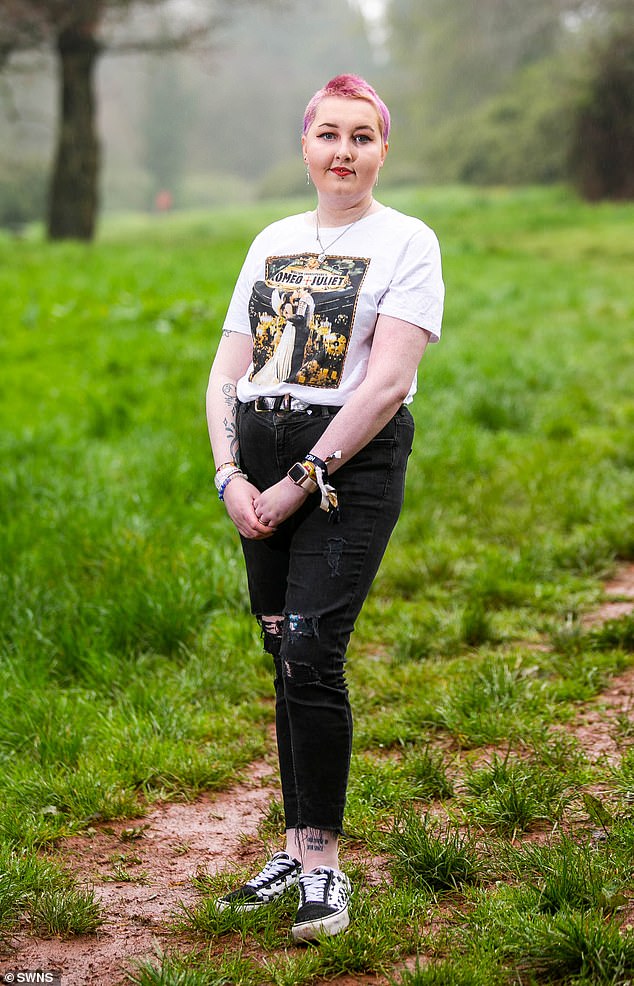 Molly White, 21, started feeling the effects of her brain tumour after a roller coaster ride at Thorpe Park in 2016, after which she began to vomit and have vision problems 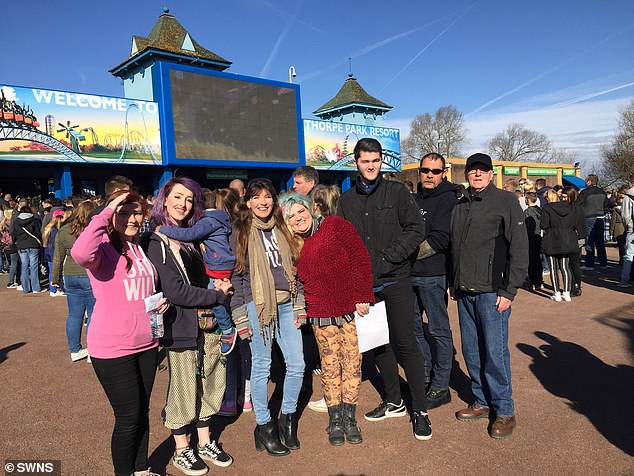 Miss White (second from left) had no idea she was gravely ill when she went to Thorpe Park for a friend’s birthday in 2016, but a month later she had been told there was cancer in her brain

‘It’s something that at the time, I didn’t think too much about, but of course that roller coaster made a massive difference,’ she said.

‘I nearly didn’t go to Thorpe Park because I was moving house and I had so much on. If I hadn’t have gone there, who knows when I would have found about the tumour.

‘The doctor said “this rollercoaster moved your head around and would have made your tumour move to where it was pressing against a part of your brain that was making you have symptoms”.

‘He said if it hadn’t it would have grown to the point where there was nothing they could have done about it.

‘It would have been too late and I probably wouldn’t be here now. The rollercoaster saved my life.’

Miss White was diagnosed with an astrocytoma, a common type of cancer which makes up around a third of all brain tumours in UK patients.

What causes the tumours is unknown and experts believe there is nothing people can do to prevent them.

Miss White has had more than one operation, one of which took 10 hours, to try and get rid of all the cancer inside her skull.

Although it hasn’t all been removed since her diagnosis in 2016, and therapy left her unable to walk for a while, she says the tumour is now the smallest it has ever been.

She noticed something was wrong when, about a month after the Thorpe Park visit, she started randomly vomiting.

Initially pinning the blame on exhaustion – she was working two jobs on top of college work – but was soon so tired she regularly fell asleep at 5pm. 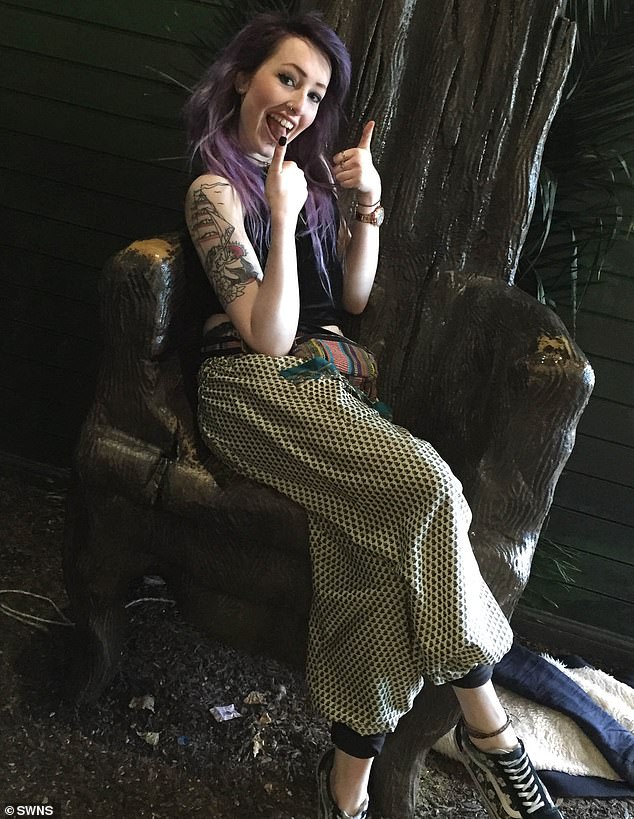 Miss White, pictured before finding out she was ill, has had to have two major operations on her brain to remove the cancer, and been through radiotherapy to try and get rid of part of the tumour which was left over and still growing 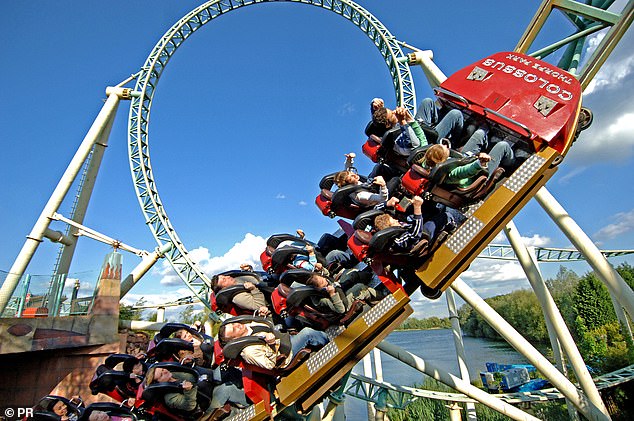 Miss White’s symptoms began after she went on the Colossus ride at Thorpe Park (Pictured: A promotional photo of the ride)

Six weeks on from the theme park visit, she went to her GP who did tests for coeliac disease, but couldn’t find the cause of her symptoms.

But when she attended a family gathering in May that year, an aunt noticed her face was droopy on one side, and urged her to go to another GP.

Astrocytomas are one of the most common forms of brain tumours, making up around a third of UK cases.

They grow from cells called astrocytes, which protect nerves and are vital for processing information.

There is nothing that people can do to prevent astrocytomas.

Their cause is unknown but may be genetic.

Astrocytomas are graded from 1-4 depending on how quickly they grow and how they respond to treatment.

Treatment depends on the grade, with 1-2 often involving surgery to remove as much of the tumour as possible.

Radio or chemotherapy may be given to kill any remaining cancerous cells.

Around 40 per cent of people with a grade 2 astrocytoma live more than 10 years.

Approximately 27 per cent with grades three or above live five years or more.

‘I looked like I had had a stroke,’ said Miss White.

The new GP instantly recognised something was wrong and did eye tests which revealed she had limited vision on her left side.

She sent Miss White to Torbay Hospital for an emergency MRI which revealed the had a satsuma-sized tumour which had grown out from her optic nerve.

‘The look on the GP’s face meant I knew at that point it was going to be bad news,’ Miss White said.

‘I went to bed that night knowing that the next day was going to change my life completely.

‘When I went in for the results there were two doctors in the room. You don’t need two doctors to tell you you don’t have a brain tumour.’

She was moved to Derriford Hospital in Plymouth, where doctors started to work out how to treat Miss White’s cancer.

She said: ‘The doctor came in to have a chat about what the surgery would entail. He started to ask me about how I came to find out about the tumour.

‘He asked when I started to get symptoms and my mum said “oh it’s when you came back from Thorpe Park”.

‘I thought he was just trying to have a conversation with me, and he asked if I had gone on the big rides and I told him how I had come off one and had a bit of a headache.

‘He told me that my tumour had been there for a long time and, where it had originally been it obviously wasn’t causing me any symptoms, but it moved.’

Miss White had her first brain surgery on July 28, 2016, when doctors removed as much of the tumour as they could during a ten-hour operation.

Four months later she had a second operation to remove other parts of the mass – but this time she was fully awake.

‘Because of where they were operating, they had to check I could still talk, to make sure it was safe,’ Miss White said.

After the operation, she was left with some weakness in the left side of her body. 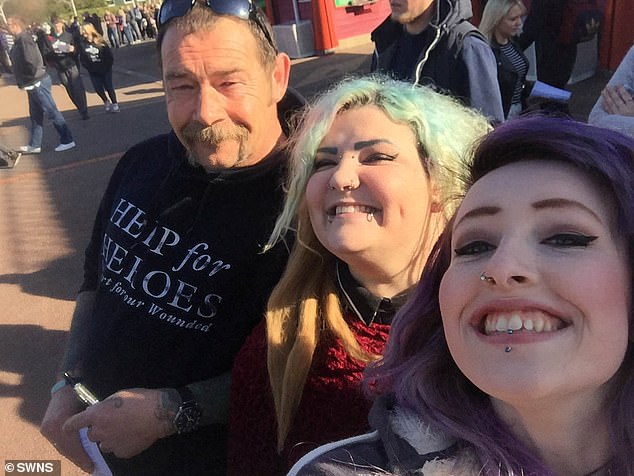 Miss White, pictured with friends before her illness, was left with some weakness in the left side of her body after surgery and needed a wheelchair then walking stick to get around 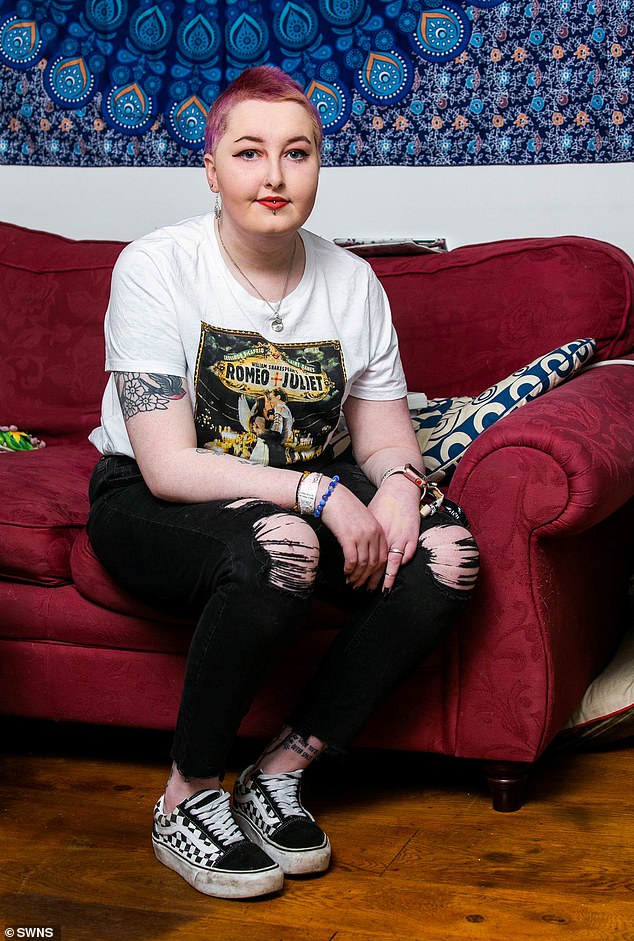 Miss White, pictured recently, says her brain tumour is now the ‘smallest it has ever been’ after she needed more radiotherapy six months ago

Over the next few months, she needed intensive physiotherapy to learn to walk again.

Initially relying on a wheelchair during her recovery, she then moved onto a walking stick, before regaining her ability to walk unaided in early 2017.

A scan in April last year revealed five per cent of the tumour which hadn’t been removed in surgery had doubled in size, and she had to undergo radiotherapy.

‘It was six-and-a-half weeks, every day Monday to Friday, during the heatwave,’ she said.

‘It was tough – really tough – but it was successful.

‘Six months after, a scan showed the tumour had shrunk and it’s the smallest it has ever been now.’

Miss White still has regular scans, but is getting back on track, and now volunteers with the Brain Tumour Charity, as an ambassador, and with Age UK as a befriender.