Woman, 21, whose stomach was so swollen she struggled to tie her shoes discovers she has a football-sized ovarian CYST ‘taking up most of her abdomen’

A woman who struggled to tie her shoelaces because her stomach was so bloated found the cause of her problem was a massive ovarian cyst.

Doctors discovered the unnamed patient, 21, had a growth so big it was ‘occupying most of her abdomen’.

The gigantic lump was not cancerous but measured 24cm by 23cm inside her – about nine-and-a-half inches in length and width.

Medics performed surgery to remove the football-sized mass, which weighed 8.8lbs (4kg) by the time it was removed, and the woman recovered well. 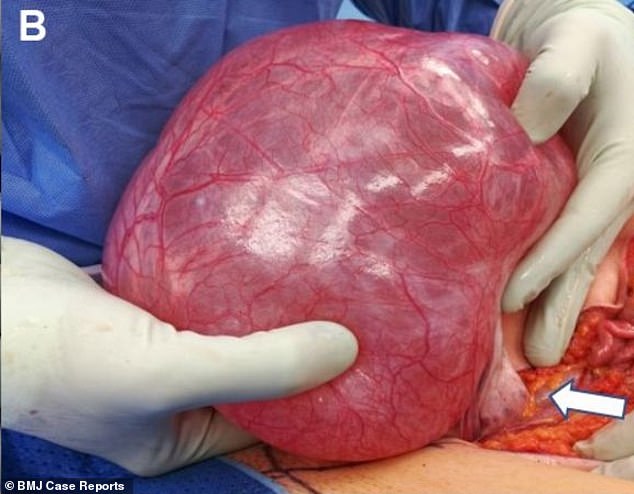 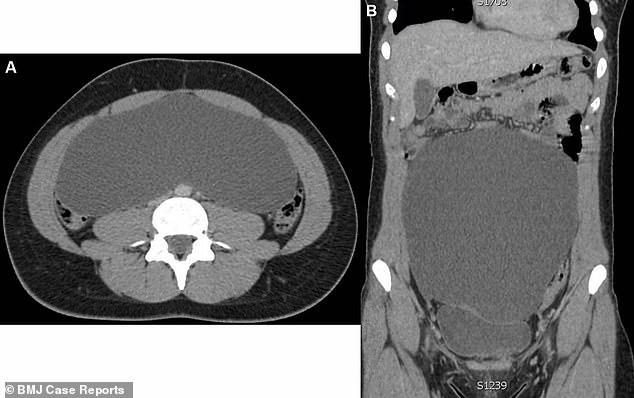 The woman said she had, for six months, been suffering from bloating but there had been no change in her appetite or bowel movements.

She also didn’t notice any change to her periods, and didn’t have a family history of ovarian cancer.

When doctors did an ultrasound scan, however, the cause of her discomfort became clear.

Their scan showed a solid grey mass taking up almost all of the woman’s stomach where the internal organs would normally be seen.

Cancer tests returned negative results and medics struggled to work out where the cyst was growing from.

They decided to operate to remove the mass in one piece instead of doing keyhole surgery, which could have burst the cyst.

When the cyst had been removed the doctors found it had grown out of her left ovary and, outside of the body, it measured 21cm long and weighed 4kg. 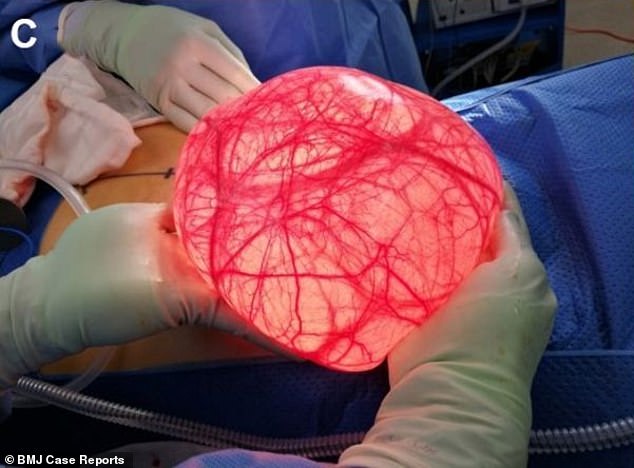 Medics cut out the cyst and discovered it had grown from the woman’s left ovary. Her symptoms had been gradually getting worse over six months 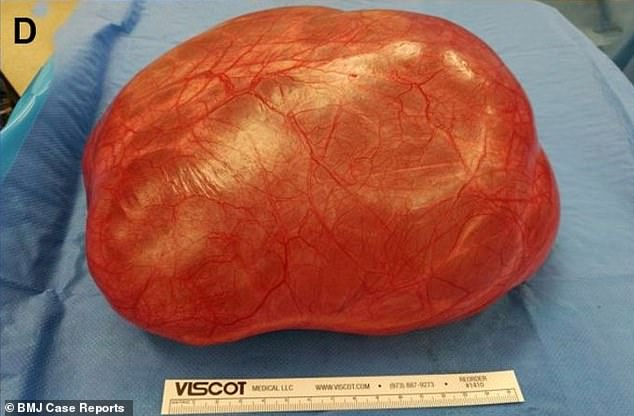 For comparison, a standard FA football measures 21-23cm across.

The woman’s recovery was ‘uneventful’ and no further problems were found, so she was allowed home after three days in hospital.

‘Giant abdominal cystic masses are rare occurrence and require [removal] due to its associated symptoms and complications associated with mass effect,’ said Dr Zi Qin Ng, who wrote the report.

Dr Zi added: ‘Occasionally, rupture of the cyst can occur which can lead to haemorrhage and shock as an immediate [consequence].

‘The origin of these giant cystic masses can be confusing and difficult to determine.

‘The recommendation for giant cysts is for [removal] of the cyst due to their compressive symptoms and risk of [cancer].’