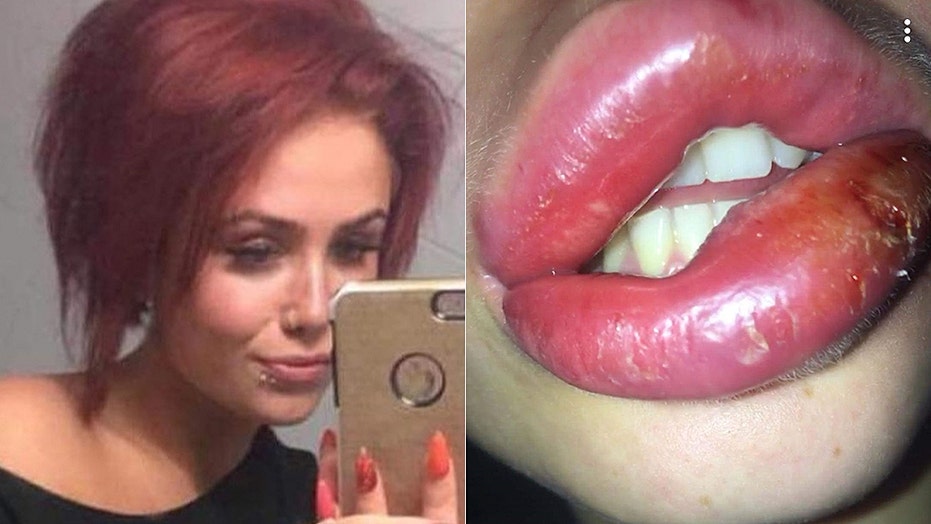 An 18-year-old woman said a trip to the salon for lip fillers landed her in the hospital for a week after her lips swelled to look like “rock solid sausages” and began leaking “green and yellow pus.”

Lauren Winstanley, who said she received a recommendation for the salon from a friend, claims she paid about $220 for the fillers.

“They started swelling straight away, when I looked in the mirror at them I was shocked because I’d never seen myself with bigger lips,” Winstanley told Kennedy News & Media, according to Mirror.co.uk. “The beautician said the swelling would go down and I listened to her and thought, ‘fair enough.’” 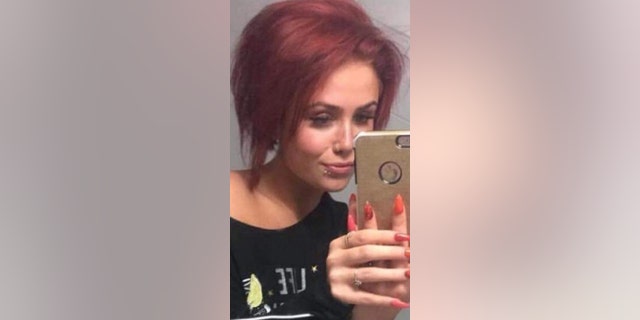 Winstanley, pictured before the fillers, said the salon was recommended by a friend.
(Kennedy News & Media)

But the swelling didn’t go down. Instead, her lips tripled in size and pain started setting in.

“I started to panic and feel unwell so I went to the hospital to get it checked out,” she told the news outlet.

Winstanley claims that painkillers failed to help and that hours after she was sent home from the infirmary, she was rushed back to Whiston Hospital in Merseyside where she was admitted and underwent surgery to remove the infected filler. 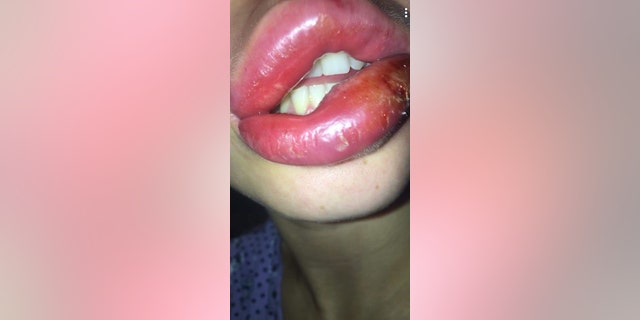 She said her lips swelled to three times the size within days.
(Kennedy News & Media)

“My lips looked like rock-solid sausages and felt bruised and were stinging,” she told the news outlet. “I started to feel sick, had a temperature and my neck and cheek felt bruised. I was put on IV antibiotics and painkillers straight away and they did blood tests, which showed I had group A strep infection. I couldn’t eat or drink as my lips were still triple their usual size and kept growing and filling with green and yellow pus.”

MORE THAN 75,000 POUNDS OF SALAD PRODUCTS RECALLED OVER E.COLI CONCERNS

“I could feel my chin keep getting wet from the infection in my lip leaking out,” she said. “When the doctor tried draining them while I was awake I ended up screaming and crying. I begged them to put me to sleep while they [treated] me as I was in agony. When I looked in the mirror it knocked me sick, my lips were disgusting.” 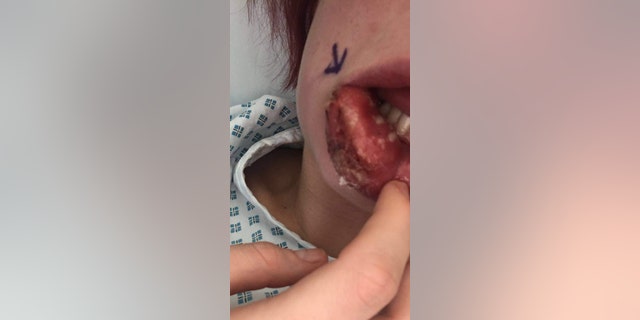 After a week in the hospital, she was finally sent home but said her ordeal is not yet over.
(Kennedy News & Media)

Winstanley said that after nearly a week in the hospital she was released. But her ordeal is not over.

“I wish I’d have paid extra and had it done by someone medically trained like a dentist or dermal nurse,” she told the news outlet. “I’ve since found out she’d not even done them for five months when I had them done. It’s put me off getting them done again in the future. I would never wish that pain on anyone, it was traumatizing.”

Winstanley is not the first to warn against seeking cheap lip fillers. A dentist in England spoke out recently after she was left with “huge blue lumps” in her lips. Sarah Najjar said she paid about $390 for her lip fillers, and while there was no lasting damage, she was so traumatized that she decided to train in facial aesthetics so she could safely perform the procedure on patients.

Risks of dermal fillers include infection, a lump appearance under the skin, the filler moving away from the treatment area, scarring, or blocked blood vessels which can cause tissue death and permanent blindness, according to the NHS. The health agency recommends researching who will be doing the fillers before booking the appointment and to ensure that they are registered to administer the fillers.