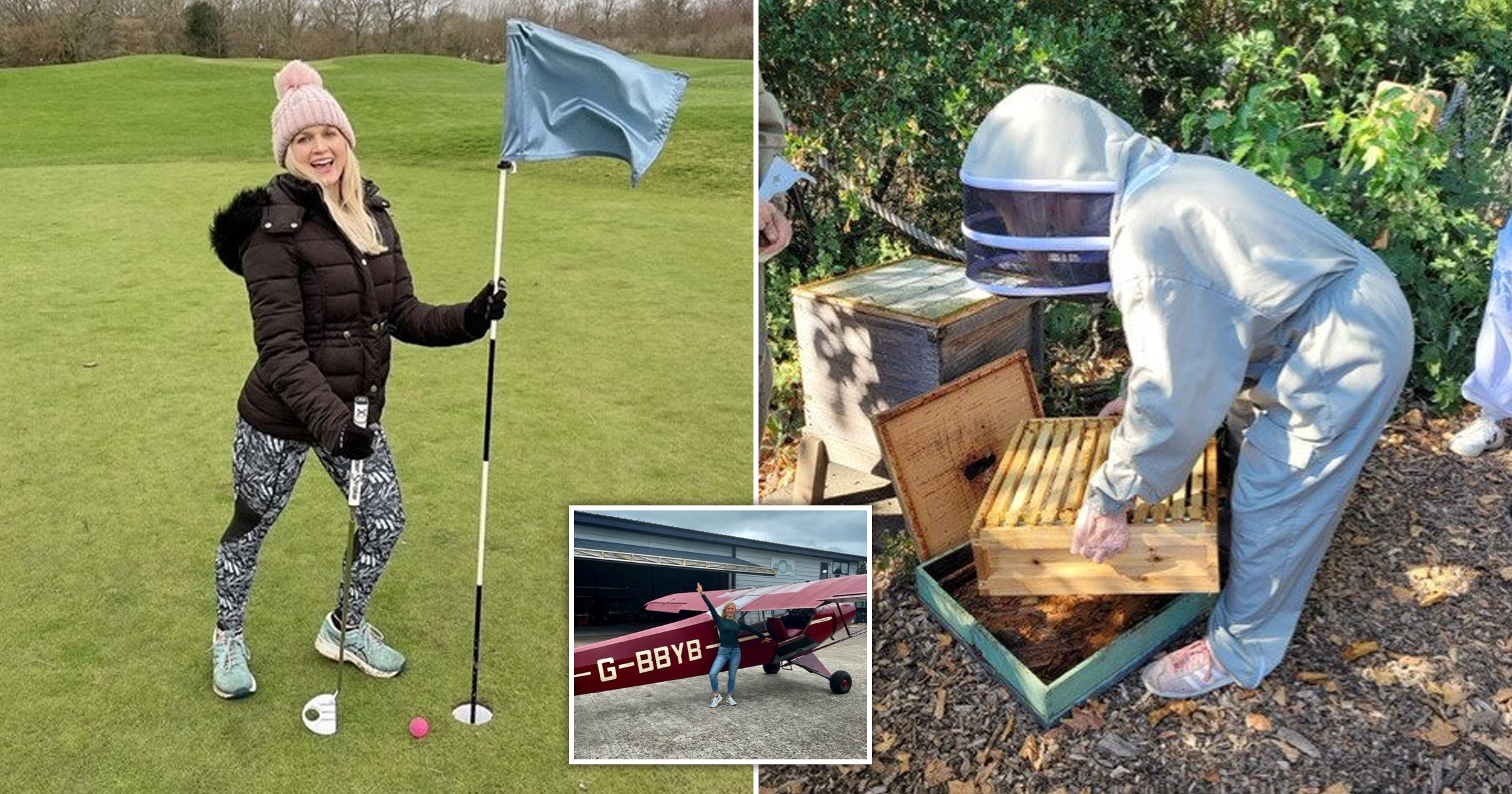 After suffering from depression and anxiety during the pandemic, Jess Mell, 34, was desperate to enjoy life after lockdown.

Now, a year later, she still has no plans to stop, and says she’s the happiest she’s been in a decade.

Jess has completed a wide range of ‘firsts’, from flying a plane, to bleeding a radiator, and joining a local gardening community group.

She has also visited Vienna, Budapest, Copenhagen, Dublin, Belfast and Krakow and, on home soil, has tried speed dating and line dancing.

Jess, from Redhill, Surrey, said: ‘I feel pretty emotional about it to be honest. I can’t believe it.

‘I could do ten things in one day if I was free.

‘I wanted to finish it off with something exciting – I convinced my dad to let me sit on the roof of his car as he drove down the road.

‘So that was quite random, but that was only 364. My final one was making my first ever Instagram reel of some of the things I’d done in the year.’

Some of Jess’ other ‘firsts’ vary from ordinary day-to-day things like trying a Pot Noodle and making muffins, to the more adventurous, like drinking a shot out of someone’s belly button and feeding a tortoise.

Jess is also keeping her cards close to her chest when it comes to one of her ‘firsts’, which she says is ‘not suitable for work’.

Learning simple DIY like hanging a picture, sewing a button, and growing a plant from a seed were all on her list – along with taking a selfie with a pigeon.

She said: ‘I’m going to keep doing it, in that it’s now just part of what I do.

‘I’ve always tried to find new things to do, so that will go on. Whether I track it the same way I’m not sure.’

She added: ‘What has been so nice about the whole experience has been that whenever I’ve thought “I could try that”, rather than putting it off, I just ask myself “why don’t I?”. I really hope I keep that up.

‘There’s still loads of things that I couldn’t do on time, like on New Year’s Day I’m going to spend the afternoon playing with miniature pigs.

‘So there’s still a lot more I want to try, so I’m excited about that.’

Joined sometimes by friends, Jess says the best part about the whole experience has been putting herself out of her comfort zone.

She’s been keeping track of all her ‘firsts’ throughout the year on Instagram at @little_jess_x.

And now, Jess is looking for new ways to challenge herself.

‘They don’t have to be proper mountains, it could just be one in the UK, but it’ll mean I can travel – I just feel a bit lost without my challenge.

‘I feel like I should constantly be doing something.’

Jess’s something new every day:

Made a Christmas Dinner

Grew a plant from seed

Did a backwards roll

Did 1000 piece jigsaw by myself

Visited an aircraft hangar – got to start a passenger plane

Got a henna tattoo

Learnt how to do various types of knots

Went to a life drawing class

Completed a paint by numbers

Learnt to pick a lock

Went on a Boris bike

Hung a picture on the wall

Learnt to sew a button

Went to a choir group

Went to a board game club

Went to a TRX class

Learnt to change indicator light bulbs in my car

Went to the British Library

Used the squat rack in the gym

Had an Espresso Martini

Played chess for the first time

Went to the Tate Modern

Changed a car wheel (or helped to!)

Drank a shot out of a belly button

Made a pizza from scratch

Did a French braid

Tried to whistle with my fingers – couldn’t do it loudly!

Drove my nieces in my car

Looked after my nieces by myself

Made a rainbow cake

Went to the National Gallery

Helped my brother prepare for the launch of his food business

Was part of a human pyramid

Tried to start a fire without matches – failed!

Got my eyebrows tinted

Saw a play version of Cluedo

Went on my first solo trip

Went to Belfast/Northern Ireland for the first time

Went to a painting class

Let my nieces do my hair and make up

Went to a clairvoyant audience night

Saw my mum get married

Attempted to learn to play the ukulele (gave up!)

Watched Only Fools and Horses for the first time

Watched a foreign film without subtitles

Went on my first solo trip outside of the UK

Went to a thermal spa

Had a mini tutorial on how to fix my boiler

Went on a ghost walking tour round London

Made jam from scratch

Made scones to go with it!

Went on a tour of Lloyd’s Building

Made tapas from scratch including a Spanish tortilla

Explored somewhere near by foot in my local area

Went on an organised walk

Visited the Museum of London

Went round the Royal Mail museum

Went to a butterfly house

Went on an e-scooter

Went on a vodka tasting tour

Went to a poetry reading session

Got pooed on by a bird!

Went to the Bank of England museum

Had a selfie with a sportsman

Made a blueberry cheesecake

Adopted an orangutan via WWF

Did a proper tequila shot

Went up The Monument

Saw a gig at Knebworth

Joined in a mosh pit

Did a solo escape room

Went to a local town’s museum

Got a spray tan

Did an open water lake swim

Sampled local delicacies such as cannoli and gelato brioche

Went on holiday with my boss

Went on a tour of Parliament

Joined in a Pride march

Saw the changing of the guard

Went to Superbloom at the Tower of London

Went to lates at ZSL

Went to some local urban caves

Tried to save a nestling – failed 🙁

Did a turmeric shot

Went to the Cotswolds

Got a selfie with Brum

Went to a Michelin star restaurant

Watched a play at an outside theatre

Had a surf lesson

Went to the Eden Project

Made my own protein bars

Went to an outdoor cinema screening

.. And watched Casablanca for the first time

Made a poke bowl

Had a beekeeping experience afternoon

Went on a pedalo

Flew with Ryanair – and didn’t have any issues – might have to reword this to just “well known problematic budget airline?”

Went to a leprechaun museum

Went to All Points East festival

Swam in the sea during a storm

Had a photo with a policeman

Went on a barge trip

Learnt to do a proper bun hairstyle

Had a go at being a window cleaner

Volunteered as a race marshall for a half marathon

Saw a change in royalty

Had a birds of prey experience afternoon

Went on a tractor ride

Went on a Thames Rocket speedboat

Went on the London Eye

Walked along the Thames beach

Went to a casino

Drank a stein of beer

Made a wax melt artwork

Featured in a corporate video for work

Had a 1:1 psychic reading

Went to a Kiran and meditation evening

Went on a train over the sea

Slept in a “pod” at a hotel

Saw the Danish changing of the guard

Went to a football match alone

Went on a boat trip around a wind farm

Asked someone on a date

Carved and painted some pumpkins

Went down the ArcelorOrbital slide

Ran up a downwards escalator

Went to a lights and lanterns display

Went to a sketch comedy show

Had a ski lesson

Had a selfie with a monkey (against my will)

Went to a hammam spa

Went to Dans le Noir (dining in the dark)

Attended a lecture about serial killers

Had a CACI facial

Went to an ice hockey match

Made a key lime pie

Had a selfie with a pigeon

Toasted a marshmallow on a fire

Pulled a pint in a pub

Took a wellbeing day off of work

Went to a ballroom dancing class

Picked my nieces up from school

Went to a pantomime

Made katsu curry from scratch

Rode on a double decker train

Went to a classic Vivaldi concert

Volunteered for the Samaritans as a fundraiser

Caught a grape in my mouth

Interviewed by the media